The Macaroni Penguin is one of six species that is crested. It is related to the Royal Penguin so closely that for a long time it was debated if the two were separate species or not. Through DNA that has been confirmed.

The yellow crest that if features is very distinct. It is located right in the center of the head. It develops around 3 or 4 years of age.  It also features a body that is black with white on the belly. They are approximately 28 inches tall and weigh about 12 pounds. The females are just a bit smaller than the males. They also feature very large bills that are orange.

The body is streamlined to allow them to swim with ease in the water. They have stiff wings with a very wide span. They have legs that are pink and color and very strong. They also feature webbed feet which makes it possible for them to move well in the water and on land. They rely on their webbed feet and tail to help them stay balanced on land and to successfully navigate in the water.

The sub Antarctic and the Antarctic Peninsula is home to the Macaroni Penguin. Over 200 different colonies have been identified in more than 50 locations where these penguins live. This includes Falkland Islands, Chile, South Orkey Islands, and the South Sandwich Islands. They have been known to move into South Africa, New Zealand, and Australian islands in order to find food. 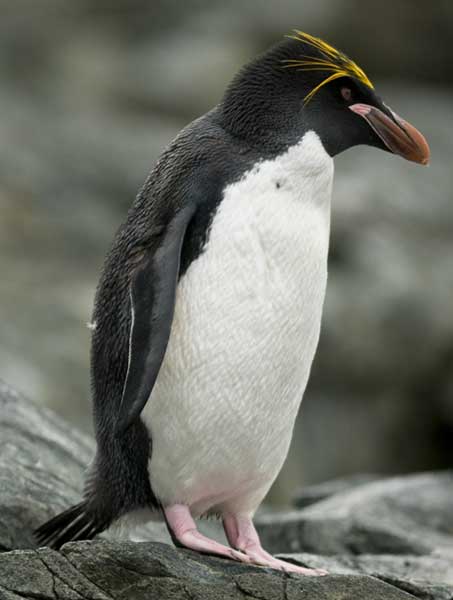 Molting occurs annually and this allows the older feathers to be pushed off as new feathers emerge in their place. It takes about four weeks for this process to be completed. The penguins don’t go into the water during this period of time. Instead, they fast and live off of the fat that they have stored up over time.

In order to keep the feathers working properly, offering insulation, and protecting them from the water they have to preen. This is a process of using the bill to access oil that is secreted from a gland by the tail. They will apply this oil all over the body on their features to keep them in good condition.

Other than mating, molting, and preening, this particular species of penguin will spend almost all of its time in the water. Like other species of penguins, they are very social. They offer some of the largest colonies though. There are sub colonies and groups found within the larger entity. It can be very noisy but the process is one that the Macaroni Penguins seem to thrive with.

While they don’t have very good vision on land, they are able to see exceptionally well in the water. Since they spend so much time in the water, there is little known about their behaviors outside of mating and molting when they are visible on land for extended periods of time.

When necessary, they are able to dive deep into the water to find food. Most of the time though they only dive a short distance into the water to get their food supplies. They can remain under the surface of the water for up to 3 minutes at a time. They have spiny elements in the mouth and on the tongue that prevent the slippery food from getting away. They eat small fish, crustaceans, and krill. Approximately 90% of their diet consists of krill. They swallow their food whole.

They are very opportunistic when it comes to eating. From the time the sun comes up until it goes down they can be in the water looking for food. This is to store up fat for when they need it, to meet their current needs, and also to feed their young during certain times of the year. They may fast for as long as 40 days during the mating season. 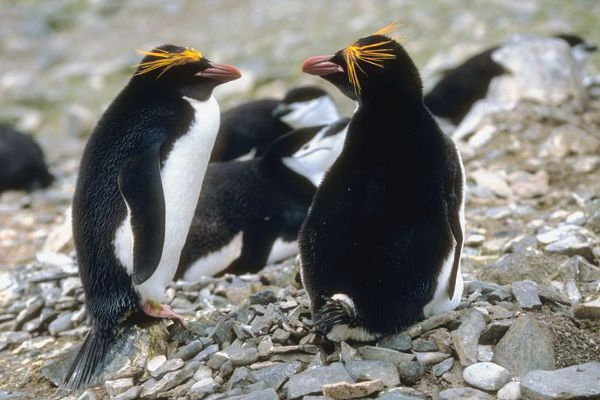 The Macaroni Penguin is mature for mating around 6 years of age. They will mate in the spring time or in late October depending on location. They will return to the same locations all the time for breeding purposes. When possible, they will find their same mate from the year before to mate with. They rely on their vocal calls to help them find each other.

For those that haven’t mated before, it is a game of displaying and picking. The males will display themselves with their winds spread out. They will also make a variety of circles and movements while calling. The females that have an interest in them will then mimic the movements and sounds. Once a mate is selected or a previous mate if located, then the process of creating the nest is next on the agenda.

The nests are going to be made around rocky areas that are close to the water. This includes cliffs that are very high up. The Macaroni Penguin is an excellent climber and the higher location helps to ensure the nest is well protected from predators. The males may fight with each other in an effort to secure the best nesting locations.

The female will lay one or two eggs in the nest. If there are two, they will likely only care for the larger of the two chicks. They will take turns incubating the eggs for about 36 to 40 days at intervals of 10 to 12 days. When the young are born, the parents will take turns carrying for a chick on land and going to get food to bring back. However, the male will stay with the chick for longer periods of time than the female. This is because his body will be able to fast for a longer time than the female body can. The chicks can’t go into the water until their adult feathers molt.

This is the species of penguin that experts believe has the highest population. Some of the larger colonies have more than 2 ½ million members! Leopard Seals and Killer Whales are their primary predators.