The Loggerhead Sea Turtle is very interesting, and they can grow to a size of about 3 feet. They can also weigh as much as 300 pounds. Their size though seems to vary based on location.

One of the characteristics that identify it from other types of sea turtles is the very large head. The body is shaped like a heart and they have a shell that contains both shades of red and brown on it. They have jaws that are very powerful due to the fact that most of their diet consists of hard shelled organisms.

The males are able to be distinguished from the females when they are mature due to their tails being longer and thicker than the females.

The Loggerhead Sea Turtle has a very large distribution area. They are found in Oceans around the world including the Atlantic Ocean, the Indian Ocean, and the Pacific Ocean. Some numbers of them are also found in the Mediterranean Sea. They tend to stay in areas that are going to offer grainy like sand on the beach. The Bahamas and the cost of Mexico are the most common regions for them. Others though seem to enjoy the locations around bays and lagoons.

There isn’t much information widely known about this species of sea turtle. They are believed to travel very long distances though for mating, to find food, and for the females to reach their nesting locations.  They have been recognized as spending long periods of time at the floor of the ocean resting.  They tend to me more active during the day than at night.

The diet for this species of sea turtle mainly consists of hard shelled organisms. This can include crustaceans, shrimp, mollusks, jellyfish, crab, and small sized species of fish. It is common for them to dive deeply to feed from the bottom of the water most of the time. Yet they will also feel in shallow water near the coast if they can find it. 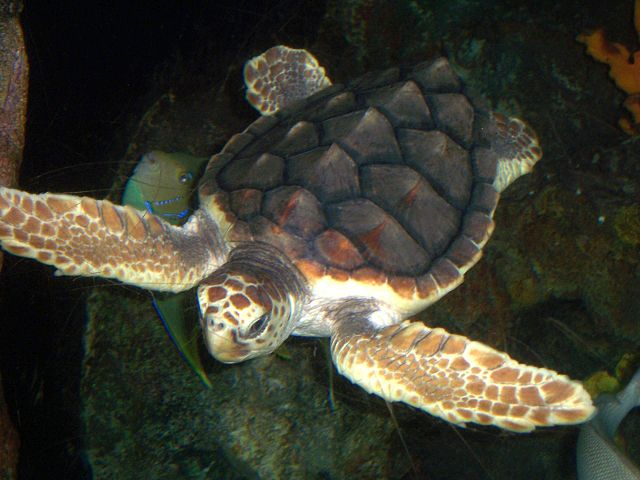 The Loggerhead Sea Turtle mates the latest in life of all the species of sea turtles. They are typically from 17 to 33 years old when they will take part in mating. There isn’t much known about the courting process, but it is believed to start out as the migration procession of males and females begins.

The females are in control over who they will mate with. However, it isn’t known what factors result in them selecting one male over another. The females will then begin the journey to the nesting grounds to deposit the eggs. She may do this several times per mating season. She will go to the shore and dig a nest to place those eggs in. It can take her several hours to dig, to deliver her clutch of eggs, to cover them up with sand, and to return to the water.

After about 50-80 days the hatchlings will start to emerge from the eggs. They will have to dig their way out which can take a couple of days. Once they get to the surface they will scramble to the water. It isn’t uncommon to see hundreds of them doing so at once. Only a small number of them though will reach the water where they are instinctively able to swim and care for their own needs. The average lifespan is from 47 to 67 years in the wild.

Like all species of sea turtles the Loggerhead Sea Turtle is considered to be in danger of survival.  Part of that problem is due to the fact that they don’t reproduce until later in life. Pollution, commercial fishing, and even boating accidents prevent many of these sea turtles from reaching the age of maturity.

Large numbers of eggs that are deposited on the shore end up being harvested by humans to use for their own food consumption. The Loggerhead Sea Turtle has also been killed for their meat and for their shells to be used for a variety of things. Various forms of medications and cosmetics are created from the use of fat in their bodies.

Efforts are in place to preserve the nesting grounds of these sea turtles and to prevent the eggs from being harvested. Commercial fishing entities are also encouraged to use tools that will prevent these sea turtles from being captured in their nets and traps. Limiting where such equipment can be placed is a big part of this conservation effort. Additional efforts to reduce pollution in the water are a priority.

On some of the beaches, humans have been helping the new hatchlings to get to shore. They get them out of their shells and put them into the water so that more of them have a chance to live to adulthood than before. 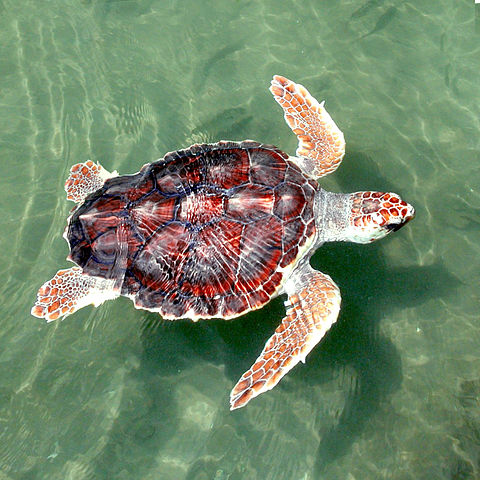 Sharks are also believed to be a problem for this sea turtle. Approximately 40% of the nesting females that come to shore have various bite marks on them. Most experts believe that these bite marks have been made by sharks. As a result, it is believed that a large number of them end up being killed by those predators in their natural environment.

Loggerhead Sea Turtles are also prone to various types of diseases and parasites that can reduce their numbers. They have been found to suffer from forms of bacteria such as Salmonella and Pseudomonas. They have also been known to suffer from various forms of fungi that can infect their nests as well as those living in the water.