When it comes to Lizard habitat and Distribution it is extremely diverse.Antarcticais the only location in the world where there isn’t some species of Lizard. They do need warmer climates when possible as they are cold blooded. However, when it is cooler they are able to slow down their body functions and to survive. They are able to eat dry foods too that many other creatures are going to bypass.

Small species of Lizards often live under rocks and in crevices. They are frequently found basking in the sunlight though and that is why they are often visually seen during the daylight. Since they are able to move so quickly though they can get away from predators and from humans that happen to be in the area.
Many Lizards live in trees too. They are able quickly climb in them and they find the branches offer them solace from various types of predators. The fact that some such as the chameleon can change colors allows them to have more camouflage and thus they can find shelter in the trees even when they are out in the open.

The sandy areas and the dry deserts are the main places where you will find the larger species of Lizards. They live on land and they are big enough that they can fend off most predators. They tend to be living in areas where it is extremely difficult for other creatures to survive or even for humans to live comfortably. They are able to retain water by eliminating salt so Lizards don’t necessarily have to live close to bodies of water.

Some people find it remarkable that Lizards are adaptable enough to live in such harsh environments. Yet they are able to thrive in order to be able to do what they can with their environment. Some species are nocturnal though because it can be too hot in these locations for them to be out during the day. They can also stand on only two feet at a time to help them avoid the bottoms of the feet getting too hot. 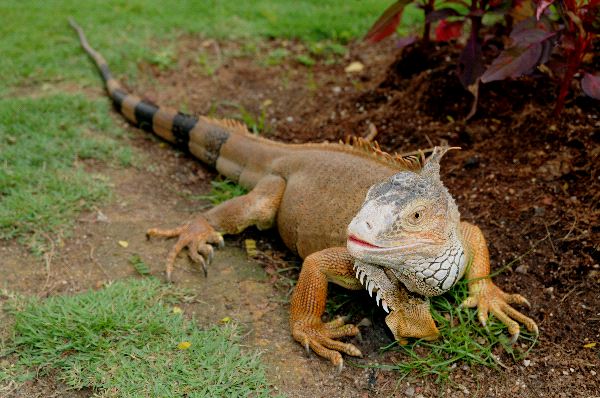 Some of the mountain regions out there are also home to the Lizards but many people don’t think about them in such locations. They seem to do well in any place that offers them enough food and some heat. When habitat is being destroyed such as the forests then they have to be able to adapt to new surroundings. They do so better than many other creatures in the wild.

When it comes to Lizards in captivity is important to identify the type of habitat that they would normally be associated with in the wild. Keeping their environment warm enough is crucial. However, a heat light should only be on one side of their cage or aquarium.

That way they can move to a cooler area of that home you have created for them when they need to. You want to make it very possible for them to adapt to the needs of their body. Talk to a specialist in Lizards before you buy one so that you can offer the right habitat for it.

Lizards typically are isolated individuals so you won’t find them in large groups. Yet it is very possible to find many of them in the same area of the habitat. They share home ranges and food resources. You may have to look very closely and be patient in order to see Lizards in any given area. Even if you don’t see them though chances are you will have plenty of different species no matter where you may live or explore.