The Lion’s Man Jellyfish is the largest of all Jellyfish. They can be more than 120 feet long. In 1870 one of them came to shore in Massachusetts and had a diameter of more than 7 feet. This was amazing to the people there and they documented the details including drawings. Today some of them have been discovered that have a diameter of up to 8 feet.

The name of this Jellyfish comes from their overall coloring and appearance. They are often portrayed to resemble the mane of a lion. Sometimes shrimp and other living creatures in the oceans will live around that mane area. It offers them a habitat and safety.

The tentacles of the Lion’s Man Jellyfish can vary in length. They have 8 bunches of them that feature more than 100 in each bunch. The bell of the body is pointed – like a star. They are found in a vast variety of colors. Some of them include crimson, purple, light orange, and tan.

The Atlantic and Pacific Oceans are where you will find the Lion’s Man Jellyfish. They prefer the warmer water areas such as those around Australia. Those found in the North seem to be much larger than those in the Southern area. They tend to live far out in the sea in the deeper waters.

However, as they start to near the end of their lifespan they may start to come closer to the shallow waters. It isn’t fully understood why that occurs though and experts continue to investigate what is causing that to occur.

Like all Jellyfish this species can move on its own vertically. To move around horizontally though it depends on the wind and the current of the water. They tend to be further from the shore than other Jellyfish so they aren’t typically seen by humans other than in pictures or when they come to shore.

A sting from a Lion’s Man Jellyfish won’t kill a healthy humans but it can still be very painful. It can cause a burning sensation and itching. A rash can occur too for those that have sensitive skin. The application of vinegar is a common way to reduce the pain from such a Jellyfish sting. 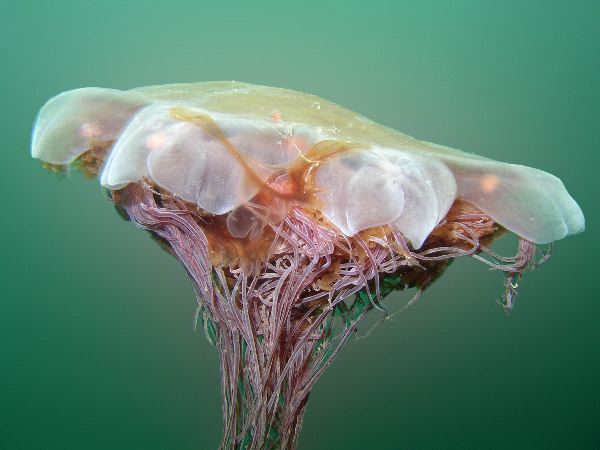 Zooplankton is a common part of the diet for the Lion’s Man Jellyfish. Various types of small fish and moon jellies can also be part of their diet. They tend to take the opportunity to find what they can.

Reproduction may take place for the Lion’s Man Jellyfish during asexual or sexual rituals. They are able to offer both eggs and sperm themselves so they don’t need a mate to create any offspring. During the summer and autumn is when most of the young will be emerging. However, there is a very high mortality rate. Even though large amounts of eggs are offered, less than half of them will survive for more than a few days.

Studies show that differences in water temperature and food supplies can affect the Lion’s Man Jellyfish mating efforts. When there is plenty of food they are more likely to mate. When food supplies are short though they may not take part in that ritual of behavior at all.

Birds and turtles are common predators of the Lion’s Man Jellyfish. When they are small they may be prey to large fish too. They are very adaptable to changes in their environment. There aren’t any conservation efforts in place for them at this point in time.