The lion is, without a doubt, the most iconic of all the cats. For thousands of years they have been revered as jungle royalty; fierce, proud, beautiful, brave and true. Nearly everybody the world over recognises a lion. They’re symbols of monarchy, bravery, regality and any number of other positive qualities, and there are depictions of lions in popular culture reaching all the way back into prehistory.

Sadly, this noble species is classified as ‘vulnerable’ by the IUCN. The reasons behind their decline as a species are not fully understood, but it’s thought that this is mostly down to conflict with humans. They do thrive in captivity, however, and reintroductions are possible – so the lion is in no direct threat of complete extinction, and many conservationist groups are working to ensure that this continues to be the case.

Male lions are instantly recognisable by their magnificent golden manes, which females lack. Otherwise, the sexes are superficially very similar: females are slightly smaller, but they both have plain coats of sand-coloured fur, rounded ears and large, broad paws with powerful claws. All lions can roar loudly, though they make other sounds too – snarls, hisses, coughs, mews and distinctive ‘woofing’ noises.

Cubs are born without manes regardless of their sex, but other than that are mostly of the colourations seen in adult lions. Both black and white lions have been known to occur, but are rare. 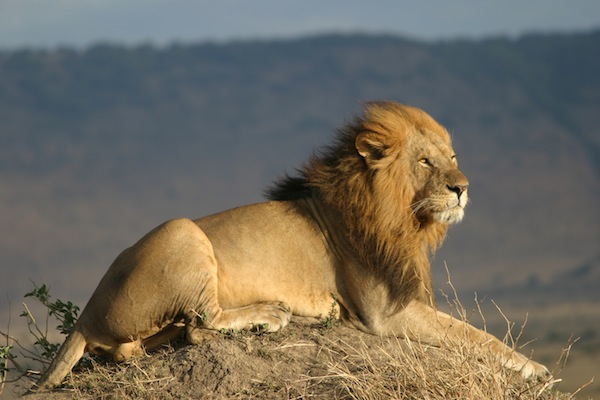 Lions live in savannah, as they require both open ground to hunt and shelter under which they can sleep, hide and raise cubs.

Once widespread across almost all of Africa, lion populations are limited. They are known to exist in the wild in relatively small numbers in various of the eastern and southern African countries, most predominately in Kenya. There are a few lions left in some regions of India, but they are becoming increasingly rare – largely due to their faulty reputation there as being “man eaters”, one that is actually mostly attributable to leopards.

Lions are famously the most social of all cats. They live in ‘prides’, social groups that usually consist of a small number of males who operate a strict hierarchy and a larger group of females, accompanied by their cubs. These prides live, feed, hunt and breed together, though for the sake of genetic diversity cubs tend to both leave and join prides over time.

Rather than being strictly nocturnal, lions are what is described as ‘crepuscular’: they are most active at dawn and dusk, generally spending the depths of night socialising and the height of day asleep.

It is possible to tame a lion. This is a dangerous procedure and is not suitable, but they can be trained and tamed– a fact that has been utilised in any number of performances over the years.

Lionesses are, by nature, more aggressive than male lions. As such, they hunt in groups to feed the entire pride – leaving the males to stay at care the young. Generally speaking, they co-ordinate to surround their prey and stalk them for a while before sprinting in a short burst, killing them by strangulation, and sharing the load on the journey back to the group where all the lions eat.

They kill mostly large, herbivorous mammals – wildebeest, impala, zebra, buffalo, warthog, boar, gazelle and springbok. They are capable of taking down a fully grown male giraffe, but only do so in dire circumstances – giraffes are surprisingly fierce, and attacking one runs a high risk of injury to the lioness. The same goes for hippopotamus, rhinoceros and elephant – each is possible if needs absolutely must, but this is a dangerous hunt and to be attempted only when there is no other choice.

Once a kill has been dragged back to the pride, the male lions feed first – and lionesses often have to snarl or fight for their share. All lions seem to allow cubs to share food freely, however. Males prefer to go hunting at night.

Lionesses can come into heat at any time of year, and while she is in such a state – which usually persists for two or three days – she will mate thirty to forty times a day with the males in her pride. This is a point of competition for male lions, however; they will often fight for the privilege of mating with a lioness in heat first or exclusively.

Toward the end of the gestation period (usually a little over a hundred days), the lioness will retreat from her pride for a while. She gives birth alone, and raises the tiny, helpless, born-blind cubs by herself for approximately six weeks; hunting alone and moving them from den to den by carrying them in her mouth. After this time – which is slightly shortened if there is another lioness in a similar stage – she will return to the pride, shepherding her cubs with her. 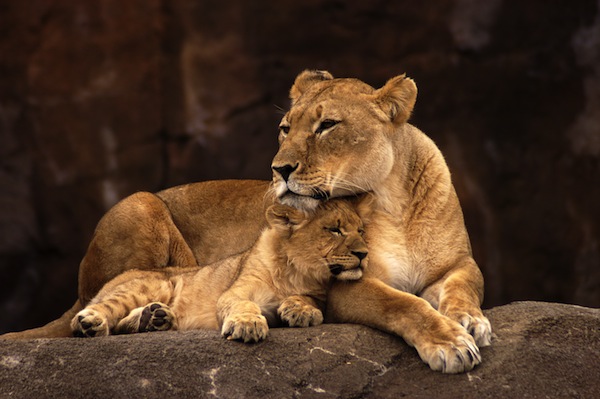 Once reintegrated, raising the infants becomes a group concern. Cubs suckle indiscriminately from any lactating female, and play with and socialise with each other as they grow. They attempt to initiate play behaviour with adult lions, too, and some allow this – sitting patiently while a cub plays with his tail or mane – but others snarl and bat them away.

It’s rare for an adult lion to attack a lion cub, but when it does happen it’s almost always because there has been a change in leadership. Newly-dominant male lions will usually attempt to kill any currently-suckling cubs, largely because a female will not come back into heat until her cubs are either grown or dead and he wishes for his DNA to be propagated as soon as possible. This is the main reason that lionesses often come into heat simultaneously – if there are a group of mothers defending their cubs, they have a far greater chance of collectively driving off a usurper than a single mother alone. Lionesses protect their cubs with a fierceness that is almost unparalleled in the animal kingdom.

At around three years of age, a newly-matured male lion has two options: he can leave the pride, become nomadic for a while, and attempt to join another (usually by attacking the current leader), or he can attempt to take over his own pride, by beating its leader and sending him away. Lionesses almost always stay with the pride to which they were born, but sometimes – particularly if a pride has grown large – they will be forcibly sent away by their relatives. Although nomadic lionesses do sometimes successfully integrate with another pride, it is very common for them to die while trying to find a group who will have them.