Life-cycle of The Three-Toed Sloth 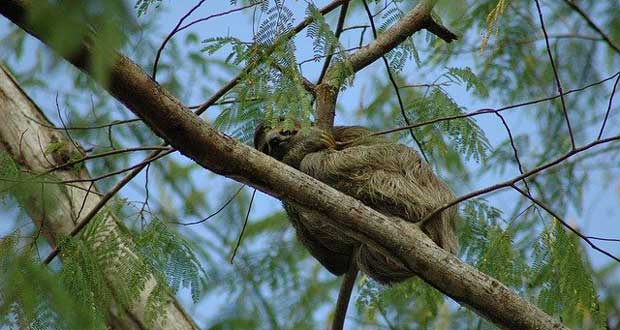 Three-toed sloths are Latin American critters, famous for being slow and cute.  Their bodies aren’t good at walking, but they’re great at climbing around and swinging from tree branches, which is where they spend most of their time.  Their slow movements and tendency to grow algae-covered green fur helps to hide them from predators, and their slow metabolism means they don’t need to eat too much.  Let’s learn about their lifecycle!

Sloths are only ever pregnant with a single child. A mother sloth will be pregnant for about 6 months before giving birth. Then, she’ll then hang out full time with her offspring for about 9 more months with her baby clinging to her belly! This is all before the baby is “weaned,” and she can begin roaming further and further away while leaving the child at home.

Scientists have found that sloths will tend to occupy different trees. For example, even when the mother’s territory still overlaps with her child, they may keep to different species of tree so everybody has their own space.

Three-toed sloths pretty much just do their own thing at this point.  They’re active during the day, and tend to continue sticking to one kind of tree (but will switch trees a few times a day).  Sloths tend to stay high above the forest floor for up to a week at a time, moving down only to eliminate waste.  Three-toed sloths are different from their two-toed cousins in their ability to swim well, but they still move very slowly and have to drag themselves around by their arms if they’re on the ground.

Sloth diets consist almost entirely of leaves, which aren’t too nutritious — so it’s just as well that they don’t move quickly or have a fast metabolism.  They sleep about 10 hours a day, which seems like a lot, but they’re mostly vulnerable to predators like jaguars, snakes, and eagles when they’re on the forest floor.  Their long, scary claws are perfect to hang from trees, and they have a literal “death grip” — even after they’re dead, they won’t let go!

Sloths have notoriously horrible eyesight and slow reflexes, but they can turn their head about 270 degrees, probably because they have 2 extra vertebrae in their spines when compared to almost every other mammal (even the long-necked giraffe only has 7 compared to the sloth’s 9!)  As for how slow they are — sloths are literally the slowest animal in the world, even slower than snails or turtles, but remember that this helps hide them from predators who hunt for movement.

Once a sloth is about 5 or 6 years old, they’re mature enough to have kids of their own.  Most sloths live for 20-30 years, but one sloth in an Australian zoo recently made it to 43 years old!  Females don’t have a mating period and are sexually active all year round, and sloth sex lasts for about 25 minutes.

One male sloth will hook up with many females, searching them out in the trees by their distinctive screaming “I’m looking for a man” calls. He’ll attempt to keep other males out of his territory, marked by scent and large heaps of dung.

Now you know a little bit more about these slow, yet fascinating and exotic creatures.