Getting To Know The Lesser Flamingo

Of all of the flamingo species, the Lesser flamingo is the smallest in size, but the largest in numbers. They may also be the longest lived breed of flamingo, reaching the ripe old age of fifty in some recorded cases.

As stated, the Lesser flamingo is the smallest of all the six different species of flamingo, standing a little over two feet tall, and weighing at maximum, six pounds. From beak to tail, the Lesser flamingo is also only about 2.7 feet long. They retain most of the coloration of their Greater counterparts, but are generally just a bit lighter in tone.

The Lesser flamingo is most commonly found in sub-tropical areas of Africa. Unlike most other breeds of flamingo who are likely to mate wherever the colony lands when the females begin the mating cycle, the Lesser flamingo will often return to the same breeding sites generationally, unless it is otherwise considered unsuitable. The southern tip of Africa is the most common place to find the Lesser flamingo, they have been known to travel with other migrations of similar species of flamingos. They are known to frequent coastal areas, where food would be easy to obtain in the more arid winter months. 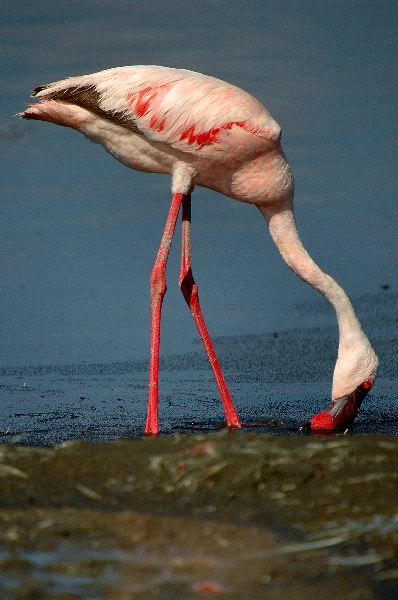 The Lesser flamingo also is separated from its cousin species, by its habits of migration. While it is still a highly migratory animal, the Lesser flamingo does not cover the huge amount of ground that other species of flamingos may, and while most flamingos travel during the day, the Lesser species migrates almost exclusively at night time. Also, while most other flamingos flock in a disorganized and fairly chaotic fashion, the lesser varieties tend to fly in the distinct v-shaped collection you would expect from migrating birds.

The most interesting aspect of the flamingo of any species is its different eating habits. Its specialized gummy membrane known as the lamellae can sift through sediment, rocks, and inedible creatures, specifically swallowing the foods it needs. The flamingo’s tongue is also a powerful mechanism for pumping water out of the Lesser flamingos mouth, and this portion of the flamingo is considered a rare delicacy in some regions of the world, because it is such a powerful muscle.

The Lesser flamingos’ diet consists primarily of invertebrate animal life stirred up by the flamingo’s feet, and some vertebrates, such as small fish. The deep coloration of the flamingo is due to the beta-Carotene found in shrimp and some of the microbial plankton they ingest. The most sought after food for the flamingo, is the diatom, a small zooplankton life form rich in nutrients and minerals present in the bottom of the mudflats the flamingos frequent. 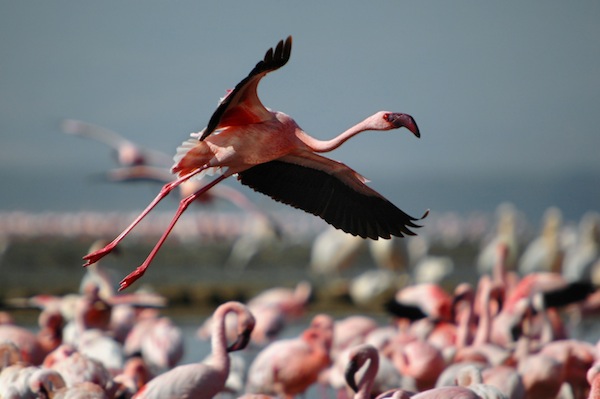 The reproduction cycle of the Lesser flamingo is a highly ritualized and practiced event. The colonies mates at the same time, the males gathering in huge collectives to flap their wings and swing their necks in a funny fashion. When the female chooses an appropriate mate, the two will go on to a separate location and copulate.

The nest is created by both the male and female, and both parties will incubate the egg to hatching. It takes about 28 days for the egg to hatch, and the chickling will come out all gray, or very rarely white. The young chick takes about six years to reach full sexual maturity. They have fairly particular breeding locations, and may be genetically meme based, or based on where they were originally hatched.