The Leopard Lizard is one of the most unusually in terms of the colors on it. The pattern of spots on it that are colored and similar in design to those of the Leopard are where the name comes from. This delightful Lizard is also the feature of may forms of mythological stories that bring both man and reptiles together.

The body of the Leopard Lizard is very long and drawn out. They lie very flat to the ground with appendages that span out very similar to the alligator which is also a reptile that is distantly related. The tail is extremely long and very thin. The spots cover the tail as well as the rest of the body.

There is quite a diverse habitat out there for the Leopard Lizard. They live in many areas around the United States and throughout the Northern part of Mexico. They are also found around Baja Peninsula, the Pacific Islands, and through the Gulf of California. They are also dominate in various deserts including the Mojave, Great Basin, Chihuahuan, and Sonoran.

They have a diverse habitat that they live in along all of these areas. Some of them live in the very hot areas, thus the deserts. They may live around sea level or up to 6,000 feet above it. It is believed that the Saltan Sea in California draws the Leopard Lizard to that region.

Leopard Lizards are very alert, curious, and intelligent. They tend to spend time investigating their surroundings. They spend a great deal of time lying in ambush to find food. Even when they aren’t hungry they seem to thrive on the ability to readily capture and kill. It is believed that they have a very strong instinct to be dominate in their habitat but that it isn’t limited to only their own species. They don’t want to share that environment with any other living things. 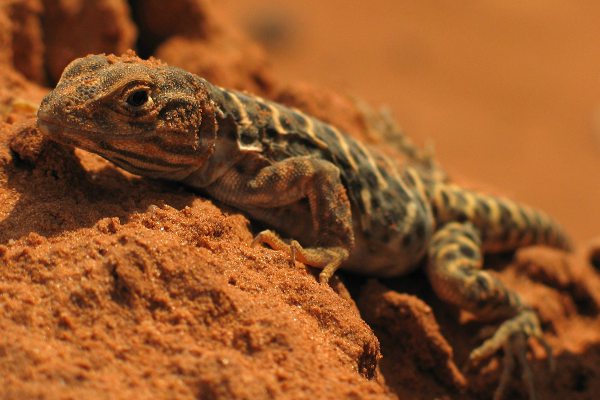 This Lizard is a very skilled predator. It is able to move quickly, to pounce on prey, and to do all it can to survive. They like wide open areas where they can enjoy the thrill of chasing their prey. This Lizard is very fast even though their physical appearance often gives the impression that isn’t the case.

Their diet includes crickets, mice, mealworms, beetles, flies, bees, termites, and grasshoppers. There are studies that show when food supplies are short the Leopard Lizard will resort to cannibalism. Typically they will eat the young that aren’t as strong as they are. However, they will also try to kill others their side to feed on and to make sure that they eliminate threats to their own territory.

The Leopard Lizard is isolated most of the time other than when they are ready to mate. The time of year for mating varies based on the location where they live. The males will fight aggressively with each other in order to be more attractive to the females that they want to mate with.

The process is that once mating is done the two separate and the male heads off to find another female for mating. The females have to find a save location for the eggs to be deposited. Those eggs will arrive in 2 – 4 weeks. She has to find a place where they will be warm and where they will be able to avoid predators finding them.

The female has no other responsibility for her eggs once she places them in a nest. She doesn’t stay to protect them or to see if they survive. The young emerge in about 2 months and care for their own needs. Each clutch of eggs can have from 5 to 6 in it.