One of the interesting shark species out there that still is very mysterious is the Lemon Shark. They seem to be able to do very well in any type of location, feeding at the surface or along the sand at the bottom of the water. They are large in size and they are able to defend themselves well. They also have been known to bite humans so that makes them unfavorable in the eyes of many people.

The name for the Lemon Shark derives from the fact that it has a yellowish color to it. This is the result of various lighting within the depths of the water where they live. The result is a look that is pitted and yellow –resembling the outer look of a lemon. This species of shark can grow to be up to 10 feet in length. They weigh around to 420 pounds.

The body is very stalky and they are able to easily move through the water. The head of the Lemon Shark is very flat and they have a snout that is short. They have two dorsal fins but they are almost the same size as each other rather than one being substantially larger than the first.

This particular species of shark is very patient when it comes to hunting. They are able to use their yellow coloring to help them successfully hide in their natural habitat. They are often found swimming along the sand of the bottom of the water so they blend in with ease. This makes it easy to hide from predators and also to be able to find food sources.

It is believed that this shark has a special set up with the retina. This enables them to be able to see very clearly even in the murky depths under the water. The Lemon Shark can be aggressive to humans and it has a bite that is very powerful. Most of the attacks that have been noted were provoked, but that isn’t always the case with them. Since they blend into their surroundings so well, it is easy for someone to accidentally disrupt the shark.

What is encouraging about the Lemon Shark is that they are able to do fairly well in captivity. That isn’t usually the case with species of sharks. Still, many experts worry that they won’t copy all they do in the wild in captivity so they don’t usually rely on such details and observations as facts if they can’t also be confirmed in the wild. They are very social though and they do develop a hierarchy based on gender and size that is very complex.

The Lemon Shark is gentle in nature and doesn’t seem to be aggressive towards people in the water including divers. They have been known to bite humans but it is believed this is due to being spooked or provoked. They aren’t seen as a major threat to sharing the waters with humans. 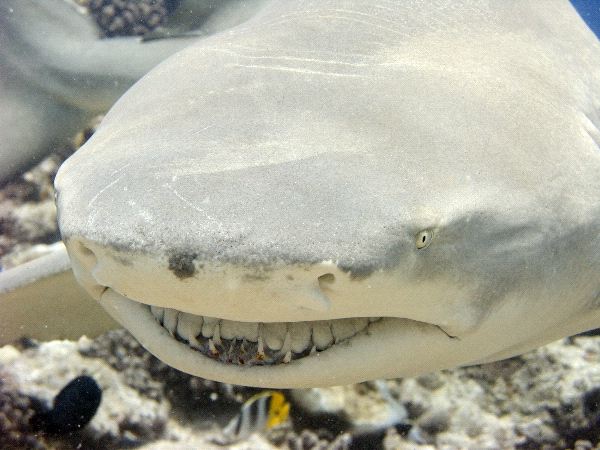 Due to the amount of camouflage the Lemon Shark has, they don’t seem to have too much trouble getting food sources. They often wait and then will use the element of surprise to help them. They can find a variety of squid, crustaceans, stingrays, and eagle rays in the water. They also are known to consume sea birds close to the surface of the water.

It isn’t unusual for them to dive more than 1,300 feet in order to get to food. However, they will look for food by the shore first to help them conserve energy. When they are frequently diving, that is an indicator that there isn’t enough food for them in that given habitat.

There is a lack of adequate research to show the overall mating rituals and process for the Lemon Shark. It is believed though that they migrate long distances in order to find mates. This information is based on tracking devices that have been placed on some of the Lemon Sharks. It is believed that the females give birth to pups every couple of years. They may have up to 17 pups at a time. They young are born in shallow water and must care for their own needs from birth. The average age of maturity for mating with Lemon Sharks is from 12 years to 15 years.