The largest of all 7 species of sea turtles is the Leatherback Sea Turtle. They are also categorized as the #4 largest of all reptiles on Earth – those above them are 3 difference species of crocodiles. They can be up to 7.5 feet long and weigh up to 2,000 pounds. The largest ever found was over 9.8 feet.

The most unique thing about the Leatherback Sea Turtle is that they don’t feature a hard shell. Instead, they have layers of skin that are very oily. The flippers of this species are also longer than others. They don’t have any teeth but they do have a jaw that is well designed for them to eat their diet successfully. They have pointed areas on the upper lip that feature backward spines to the throat so they can swallow their food easily.

The body of the Leatherback Sea Turtle is designed for them to do very well in the water, and it is considered to be the most hydrodynamic of all the species. They have a teardrop shaped body with powerful front flippers that help them move through the water with ease and without using large amounts of energy.

They are varied in color from dark gray to black. They may have spots and small blotchy areas of white on their bodies. They are lighter on the underside belly area than on the top. They are the only species of reptile that lacks keratin on their scales.

The Leatherback Sea Turtle lives in oceans around the world. They are found around St. Croix, Florida, Central America and Puerto Rico in the largest populations. While most sea turtles tend to stick to the warmer waters this species is able to live both in warm and cool waters. They are able to slow down their metabolism to live in the cooler areas.

To aid them with being able to survive in the cold waters, Leatherback Sea Turtles have brown tissue that covers them and offers them protection. They are also able to counter the exchange of heat between the core of their body and their front flippers. They are known to migrate up to thousands of miles. This could be to find a mate, to find food, and for the females to get to their nesting grounds to deposit their eggs.

This species of sea turtle is a great diver and they tend to spend much of their time in the deeper waters. It is believed that their metabolic rate is able to be slowed about three times more than the average reptile. It is believed this has been a significant element for their survival in waters that other sea turtles can’t thrive in. 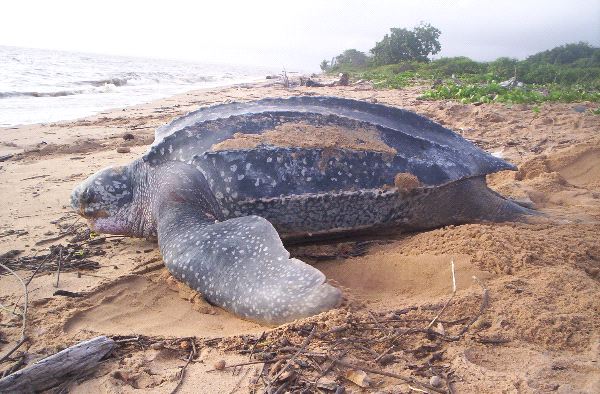 The amount of food that the Leatherback Sea Turtle consumes is very high, and they seem to be looking for it all the time. They will travel long distances if necessary to find enough food. Almost all of their diet consists of jellyfish but they are known to eat other items when necessary.

A common problem for them though is that their intestines get blocked and they can’t digest this food which results in death. This is due to consuming plastic bags in the water because they may be mistaking them for jellyfish.

Mating takes place for the Leatherback Sea Turtles between the ages of 6 years and 12 years old. Females seem to be able to mate at a younger age than the males. They mate in the water, but little else than that is really known about how they select a mate or anything.  Once mating has occurred, the females will make their journey to the nesting grounds. Interestingly enough, they avoid beaches that are surrounded by coral reefs.

There they will use their flippers to dig a place in the sand and to bury their eggs. They can lay up to 100 of them at a time. It is common for a female to next up to three times per breeding season with about 12 days between them. Once the eggs are deposited, she will cover them up to protect them from predators and to keep the shells moist. It will be anywhere from 60 to 70 days before the hatchlings come out. 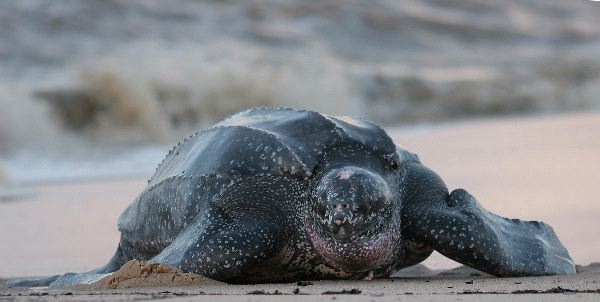 The Leatherback Sea Turtles are listed as an endangered species at this point in time – along with all the other species of sea turtles. They don’t have too many predators in the water but humans killing them and loss of habitat prove to make it difficult for them to survive. The beach areas where eggs are deposited are being destroyed and that reduces the chances of young being produced successfully.

The eggs are often harvested too in many locations for people to eat. Pollution is a common problem in the water. As mentioned previously, plastic bags in the water are a huge threat to them. Once consumed they can cause internal digestion problems for the Leatherback Sea Turtles.

The problems with commercial fishing tools such as nets and traps also accounts for volumes of these sea turtles being injured or killed annually. Due to conservation efforts, many of the fishermen that do find them will return those that aren’t harmed to the waters.

Currently, it is believed that there are approximately 115,000 of them that remain in the wild. However, it is hard to get their exact numbers due to them living in the deeper waters and the fact that the males never come to shore. Migration also makes it hard to get a good count on these sea turtles.