Kodiak bears got their name because the only place where you can find them is in the Kodiak Archipelago in Alaska.

Kodiak bears are the largest subspecies of the Brown bears which has given them a reputation in the wild a being a force to reckon with. Seeing one unexpectedly in the wild definitely isn’t something most people are prepared for. The males can grow to be about 10 feet tall and weigh from 800 to 1,400 pounds. The females are smaller than that but still a very large size overall. They can be about 500 to 700 pounds.

This particular bear is brown in color. However, it can have any color of brown so some of them are very light colored and others are very dark-colored. The overall coloring on the face is going to be lighter than what is found on the rest of the body. This is the distinct way to tell them apart from the Grizzly Bear.

The enormous head of the Kodiak bear is worth taking a close look at. They also have powerful teeth and jaws that can tear through prey very quickly. They have bulky bodies so that they can store up fat. They will eat all they can in the summer so that they can live on the fat reserves while hibernating in the wintertime.

The claws of a Kodiak bear are very sharp and long. They don’t have very good eyesight but they make up for it with their great sense of hearing and smell.

The Kodiak bear is a subspecies of the Brown Bear. They branched off from other North American bears like the Grizzly bear about 10,000-12,000 years ago during the last ice age. These particular bears were able to become much larger in size due to the fact that they don’t have any natural predators in the area and the vast food supply offered allowed them to thrive. Due to the colder weather where they live through hibernation became a necessary part of their survival skills. 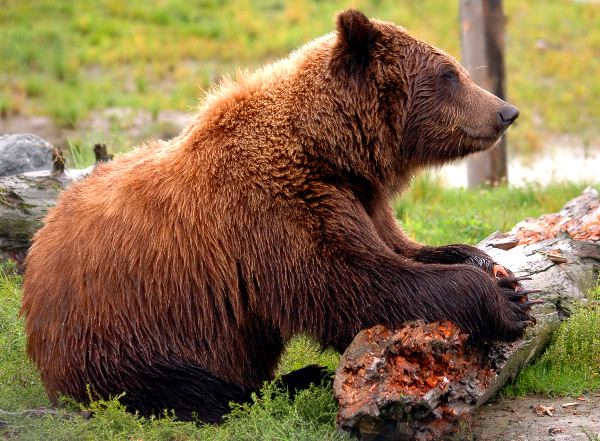 Kodiak bears are naturally diurnal, but when faced with competition, they can become more nocturnal. Yet the Kodiak bear is one that is very active during the daylight hours. Sometimes they will also be moving around at night but not often. They are very solitary in nature but they do not defend territories.

The females have a smaller range that they travel and it can often overlap that of males. Generally, these types of relationships are fine and the males will ignore these females. There is only a problem when the supply of food available is low. Then the males will want to keep their territories all to themselves as well as the food that is found within it.

Many people are confused when they read that Kodiak Bears live alone as they have seen them in the wild in groups or in photos. What is very interesting is that they will tolerate each other when they have to. For example when there is ample food in one given location but not in others. They are intelligent enough to learn to get the food they need by working together than to starve. This is a very interesting concept that researchers are still looking into further.

The name for the Kodiak bear comes from the fact that they live only in the Kodiak Archipelago. The restricted area where they live has shown adverse signs of inbreeding. It is believed that the limited region where they live is the main reason why they are prone to more problems with disease and parasites than any other species of bear.

The Kodiak Wildlife Refuge has become the primary location for these bears to reside. In this environment, humans can come to observe the bears but not harm them. This is a great place to get to experience these amazing bears in the wild with your own eyes.

The diet of this particular bear consists mostly of fish from May through September when the Salmon returns. Therefore they will be found in the areas around the waters on a regular basis during these months. After that, they also feed on berries and various types of fruit. Nuts will be consumed if they find them as well. Other plants will be a last resort of food when other sources aren’t readily available. Sometimes they will kill other animals as well in order to get enough food.

Kodiak Bears are able to identify where they should be at a given time of the year for feeding. They are able to determine what is in the season so they will feed in that given area and then move on to another. This allows them to take advantage of the various food sources which may only be available to them during a limited period of time. 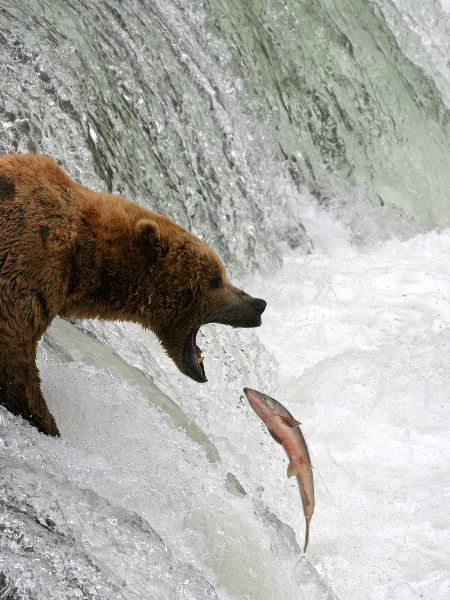 The Kodiak Bears mating season is during May and June. This is the time of year when food is the most plentiful. Unlike most other species of bears, the males will only find one female to mate with. As a result, there is less competition among males for mating rights. Once the courting has been completed the pair may stay together for a couple of weeks.

Delayed fertilization is part of the process for the Kodiak Bears. This means that even though the females have successfully conceived, they will prevent the embryo from attaching to the uterus right away. By doing so, the birth of the cubs will occur while she is still in her den hibernating during the cold winter months. The young will arrive in either January or February of the following year.

Kodiak Bears can have up to 2 or 3 cubs. The females are sometimes seen with five or six cubs, but probably due to adopting cubs from other litters.
The mortality rate of these cubs is also higher than with any other species of bears. Those that do survive can stay with their mothers for about 3 years. Then they will part ways and be on their own for survival. It is at that point in time that she will consider mating again. The slow rate of reproduction among them combined with the mortality rate makes it hard to increase the population.

The biggest threat to Kodiak bears cubs are the adult males once they emerge from the den with their mother. Adult males want to be able to mate again with the females early on but when she has cubs to care for, she will only mate every 4 or 5 years. The females may fight fiercely to protect the cubs but often they are no match for the size and strength of the males.

It is a great success history the way Kodiak bears have been protected in the Kodiak Archipelago, mainly because about half of the archipelago is included in the Kodiak National Wildlife Refuge.