The Kiwi Bird doesn’t fly and that is one distinction from it and other types of birds. They are about the size of a chicken. There are 5 species of them that have been recognized. They range in size based on location and species but they are about 18 inches tall and weigh about 7 pounds. This particular bird doesn’t have a tail either.

They are the only bird species that have nostrils at the end of their long beak. They have a beak that is about 1/3 the length of their body. It is extremely sensitive to touch. They have wings but they don’t have any muscle which is why they don’t fly. The wings blend in so well to their feathers that you have to look closely to see that they have them.

They have a roundish body like a chicken. They have claw like feet that are very sharp and they use them for protection when necessary. They also use them to dig for food.

The Southern Alps are the main location for the Kiwi Bird. New Zealand is where about 20,000 of them live. They like dark forests areas, they are able to adapt to a variety of locations. As their natural habitat has been removed they have been forced to live in areas that weren’t common to them before. Breeding programs at the the zoos have helped to increase their overall population. 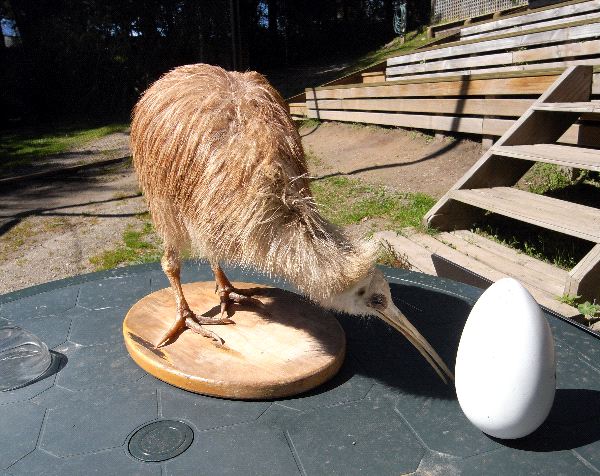 They consume a variety of foods including small invertebrates, grubs, seeds, and various types of worms. They will consume fruit when it is in season and various types of amphibians. They are able to locate insects and worms under the ground without having to see them due to their great sense of smell.

The males and females have dance rituals from March to June when they will take part in mating. They are very particular about who they choose for a mate because they will stay loyal to that same partner for life. If one of them dies there could be another mate in the future..

This particular bird lays the largest size of egg in proportion to their body size of any birds. Only 1 egg is placed into the nest that both the male and the female will create. The female will spend most of the time incubating the egg while the male looks for food to bring back to her.

They young will arrive in about 63 to 92 days. The parents will take turns protecting it and bringing food back to the nest. In a few weeks the bird will be able to leave the nest with them. They can live up to 20 years in the wild.

All 5 of the Kiwi Bird species are at risk of extinction due to increased numbers of predators and loss of habitat. They are preserved in many National Parks and forests but there is still more work that has to be done in order to protect them.