Second in size only to the Emperor Penguin is the King Penguin. This is a species that many people are familiar with. They are often on display in captivity, seen in the movies, and used for pictures in books. They offer coloring and features that are unique compared to other penguins, and that is part of the overall attraction with them that people have.

One of the distinct features of this penguin is that they have feathers on their neck that are golden and orange in color. The King Penguin is approximately 3 feet tall and they range in weight from 25 to 35 pounds. Males and females look very similar but the males tend to be just a bit larger. The body is designed to allow them to swim with ease.

The King Penguin lives in very cold climates, and they have four layers of feathers. They feature approximately 70 feathers per square inch. The outer layer offers them waterproofing and they will preen it with oil that is made from a gland by the tail. The other three layers off them plenty of overall insulation. They are also able to consume salt water due to the ability to filter the excess out through their glands. The extra salt is removed through their nostrils. 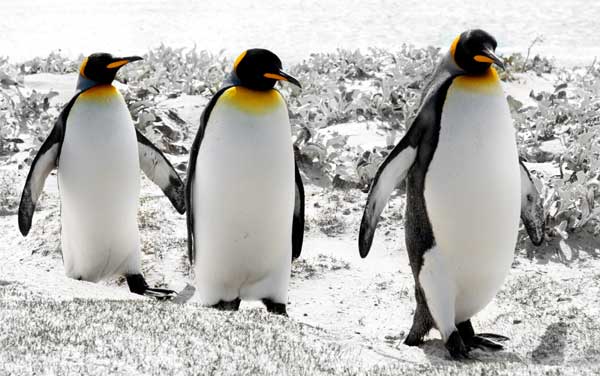 There are several locations where you will find the King Penguins living, and they are colder areas where few other creatures would be able to survive the climate. This includes the far Northern locations of Antarctica. They are located around Falkland Islands and Tierra del Fuego as well. When it comes to mating, the largest location is Crozet Island and Prince Edward Islands.

Some of them are found around the Antarctic Peninsula and into New Zealand as well as parts of South Africa. There are at least 30 separate colonies out there that have been identified. All of them seem to have high numbers.

Many people don’t realize that the King Penguins thriving in Finnmark, Rost, and Gjesvaer weren’t originally in these parts of Norway. Instead, they were part of a project to introduce them by the Nature Protection Society in 1936. However, they haven’t been successfully identified in these locations since the end of the 1940s.

The King Penguin is believed to be one of the best species when it comes to diving. They can swim extremely fast and well. They don’t use very much energy in the water. They can dive more than 300 meters for food when they need to, but will dive to less depth as long as they can find enough food.

They walk very slowly on land though which is why they tend to spend as much time as they can in the water. They come land mainly for mating and for molting. Some of the locations where they live offer them plenty of ice and snow pack that they have to walk through. They are known to slide on their belly to help them maneuver through such areas.

These penguins seem to thrive in a setting that offers them very high numbers. They are noisy penguins and that can seem chaotic watching from the outside. Yet they seem to have sub groups within the larger group. They rely on their vocalizations to allow them to easily identify each other.

A great deal of observation and research has been conducted on the vocalizations of the King Penguins. They are noted to have up to 7 syllables available in their communication efforts that allow them to be uniquely identified. The young chicks can identify the sounds of their own parents from the time they are born.

These penguins are able to dive up to 300 meters so they are quite adaptable when it comes to finding food. They will try to find food sources closer to the surface of the water whenever possible though. Eating large amounts of food is essential to the survival of the King Penguin. They need to be able to rely on the amount of fat they have stored up while fasting. When they are molting and when they are involved with mating they aren’t going to go into the water for food.

Fish and squid make up their diet of the King Penguins. They rely on spiny elements in their mouth and also located on the tongue to help them successfully swallow their food whole. Their food sources are slimy so this structure helps prevent food from slipping back out of the mouth. They tend to do most of their feeding during the daylight hours. 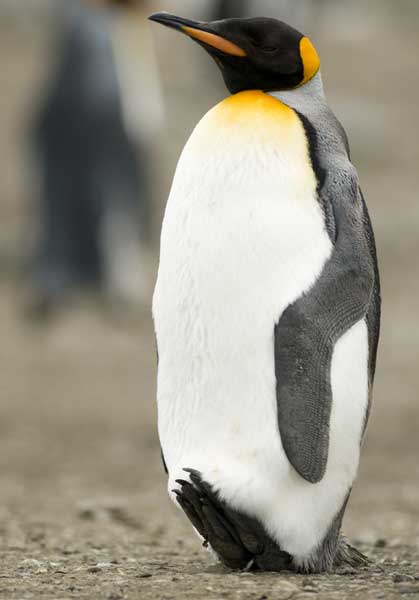 Mating will occur around 3 years of age for them. Like most species of penguins, they will secure a mate for life when possible. When the males get to the mating grounds, they will start to fight for territory to place the nest. The females will arrive several weeks later. They can call out to each other and easily recognize the sound of their mate in spite of all the other penguins surrounding them.

For those without a mate, the process for securing one is ritualistic. The males will make calls and put their body on display. Their efforts will likely encourage a female to copy the sounds and movements. This creates a bond for the two of them to pair up. Then they will work on creating a nest for the eggs to be placed into.

The mating colonies of King Penguins are found in the open grounds with very little vegetation. They are often going to create these locations around the shores and around the beaches. In some locations, they are in valleys though quite a distance from the water. They are adaptive and do what they can to find a location where their young can be safe and the parents still have access to get food sources to their young.

The young chicks have a light brown and gray coloring to them. They will get a thicker coat of feathers that is much darker when they go through their annual molting. This can happen between 10 and 12 months of age. In the wild they have a life span of 15 to 20 years. There is estimated to be about 2.25 million King Penguins in the wild. There is a high mortality rate though and only a fraction of them will reach the age of maturity.