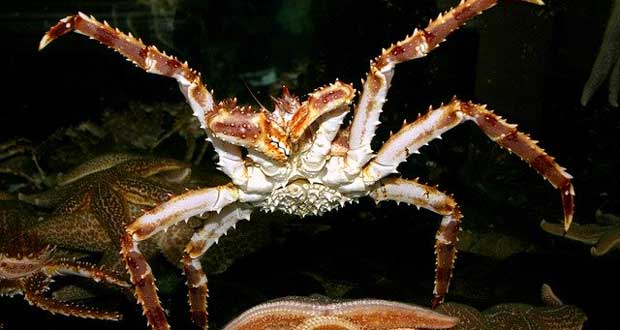 King crabs are large crustaceans that are marine invertebrates. They are a delicacy for many seafood lovers and the demand for King habitat in the cold waters in Alaska. The demand for King crab meat has soared. Commercially, it is the blue, golden and red king crab that is in demand. Read on to find out 6 amazing facts about King crabs.

There are 120 species of King crabs. They reside in shallow or steep ocean floors. While most species are found in warm waters of the Southern hemisphere, few such as the Alaskan king crab have made a  Follow us as we dive deep in the 6 amazing facts About King crabs.

The King crab can grow to a carapace width of 11 inches. They can weigh between 10.5 to 24 pounds. Some species of the King crab can have a leg span of up to 6 feet. Generally, the males are larger in size compared to the females.  Aside from body size, the abdomen is used to distinguish males and females. The females have a wide and fan-shaped abdomen whereas the males have a narrow and triangular abdomen.

King crabs are sexually mature when they are 4- 5 years old. The female carries fertilized eggs, in thousands, beneath her broad abdomen. A year after mating, small larvae emerge from the eggs.  The larvae swim and feed on phytoplankton and zooplankton then molt and morph into non-swimming juveniles and settle on the seafloor. In the initial stages of their life, King crabs molt their shell frequently. Due to their role in reproduction, its only the female King crabs that molt in their adult life. Another fun fact is that outside of the mating season,  the King crab is a solitary creature.

The King crab has 5 pairs of legs. The first pair of legs transform into unevenly-sized pincers, with the right claw being larger. They are used for feeding. The fifth pair of legs, which are specialized for reproductive functions, are small in size. They are used to transfer sperm cells during the mating process and to clean fertilized eggs.

King crabs are carnivorous and they feed on sea stars, worms,  barnacles, clams, sea urchins, fish, sand dollars, and snails. Other factors such as their age and the location in which they reside influence their diet. The marine predators that are hostile to King crabs include octopuses, sea otters and fish like the halibut and Pacific cod. Its body is covered with a thick, armored shell that serves as protection against the predators. It also uses its pincers to fend off attackers. Their natural habitat is usually near coral reefs as they provide good hiding space and plenty of food.

Just like most marine creatures, the King crab breathes via gills.  Its blood pigment, hemocyanin, contains copper.  For this reason, King crabs have blue-colored blood. How cool is that?

Although the King crab lives in water, it cannot swim. It uses its long legs to move on the ocean floor. At the beginning of spring season, it migrates from deep waters to shallow waters, which are their breeding grounds. The King crab can walk a distance of 1mile per day. During annual migrations, they can cover a distance of up to 100 miles.

We hope that now that you know these amazing facts about King crabs, you will appreciate this crustacean. If you get a chance to deep-dive near the coral reefs, be on the lookout for them. If you have a dish that includes the King crab, enjoy the bite!