Many people don’t realize it but the Killer Whale is very closely related to the different species of dolphins. This is the largest of all dolphins in the family. A common name it is known by is the Orca. They are the most powerful among predators in the world. They are also responsible for the most human deaths out of any dolphins.

It is hard to image the size of a Killer Whale as they can weigh from 6,000 to 10,000 pounds. They can also range in size from 20 to 30 feet long. The females are smaller in size than the males but still quite enormous. The males have a dorsal fin that is quite a bit larger than that of the females. They are black and white with a patch of gray on the back behind the dorsal fin. Their areas of black and white are very distinct. They also have white on the belly. There is white around the eyes and behind them. They are able to swim quite well for being so large, and this is due to the forelimbs. They are able to use the pectoral flippers and their fluke to navigate around in the water.

All of the oceans in the world are home to the Killer Whale. They live very close to the ice pack found in the Arctic Ocean as well. They are South of the Antarctic Ocean and they do seem to like the cooler water more than the warm regions. Yet they also live in the tropical areas so they have quite a bit of diversity to be found in their habitat. When they need to find food they may move long distances in order to get it. They aren’t migrational for the most part but can move often for resources when it is a matter of overall survival. The deeper waters are where you may find the Killer Whale but typically it will be from 65 to 200 feet deep. Sometimes, they are found in waters shallow around the coastline to find food. They have to be careful not to get stuck in water that isn’t deep enough. They can dive up to 980 feet. When they have enough food though they will stay very close to their identified home range. 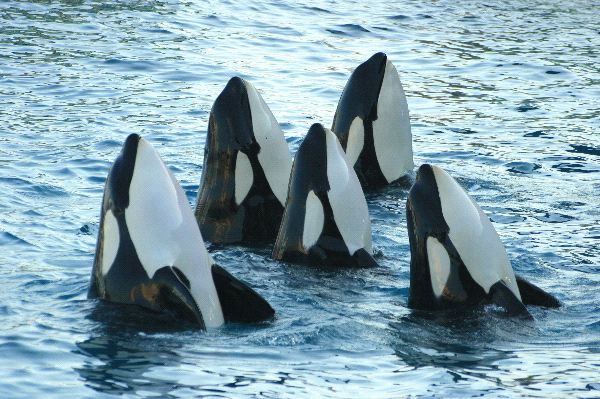 They are every bit as social as other dolphins, and they use clicks and whistles to communicate. They also use screams that can be quite different for various meanings. The dialect can vary from one pod to the next for Killer Whales. They often engage in touching as a way to socialize and to form bonds within their pods. This can include rubbing on each other, slapping flippers, and even smacking with the tails. When they are seen with their head out of the water, it is referred to as sky hopping. They can be very curious about their surroundings. Echolocation is a big part of communication for them. They use it to collaborate efforts for hunting and also to find their food resources in the water. Killer Whale pods often have 40 or 50 members in them, with a very deliberate hierarchy. Socially, they create very deep bonds and it isn’t uncommon for the offspring to remain in the pod with the mother for life. This is especially true of the females. This is believed to be a big part of why the Killer Whales will mate outside of their pod. Sometimes, they are seen playing around with other living things in the water, but they have no plans to eat them. They can be aggressive or just having a good time.

The large size of the Killer Whale makes it no surprise that they need to eat lots of food daily. They often take to consuming very large marine mammals such as sea lions and seals. They have been seen consuming small dolphins or whales. When these larger food items aren’t readily available they will consume fish, squid, sea turtles, sea otters, and birds. They can consume just shy of 100 pounds of food per day. They have very long teeth that can be up to 4 inches. They rely on their teeth to hold the prey. For larger prey, they have to tear of big pieces of it and then swallow it. The efforts of a small group of them to get enough food is very important. This allows them to get their prey before it can escape and to feed without using lots of energy. They will often circle around their food sources. Another option is to stun the prey by hitting it with the fluke.

Mating occurs later in life for the Killer Whales. For females it is usually in their early teens. For males it can be from 15 to 21 years old. They are able to mate at any time of the year. The young will arrive from 15 to 18 months after mating, depending on the location. They can be from 6 ½ to 8 feet long when they are born. They can also weigh as much as 3,000 pounds at birth. They will drink the milk from their mothers for the first couple of years. However, they also start to consume solid food when they are about 4 months old. The females will only mate once every 3 to 8 years and that can be a significant problem for their survival rates. The females will stop mating when they are around 40 but they can live up to 90 years in the wild. Still, the females that no longer mate are a vital assistance in the pod. They often care for the young in various capacities.

There are several threats to the future for the Killer Whale. Since they are so large, some hunters love the idea of being able to take down one of them. They high guides that will take them to the locations where they can hunt for them. Even though it is considered to be illegal in many places, the process continues as the laws can be tough to enforce. Commercial fishing has increased and they can get caught up in the equipment or collide with the heavy boats. The heavy fishing in many of these locations also means that the Killer Whale struggles to find enough food. Since they need so much food every day, even small decreases in food supplies can have a huge negative impact on them. There are programs in place on National and International levels though to help protect their natural habitat. Reducing problems with pollution and hunting are high on the list of strategies to help them. It is very hard to keep a Killer Whale in captivity due to the amount of food they eat and the amount of space they need. Transporting them from the wild to such a facility is also difficult. As a result, the efforts focus on helping them to thrive in the wild. It is also hard to get a good handle on the number of Killer Whales that remain in the wild. They are listed as endangered due to the risk factors surrounding them and their slow rate of reproduction.