It is believed that the Jellyfish is one of the oldest living creatures on Earth. There is evidence to suggest that they have been around for over 700 million years. Such information is based on fossil remains that have been carefully collected and analyzed. These creatures live in ocean waters around the world. They live in various temperatures of water and depths of the water depending on their specific species.

Some of them are less than an inch in diameter while others are very large. The Lion’s mane jellyfish is the largest known species of jellyfish in the world. It has 120 feet long, including the tentacles. They range in a vast variety of colors, sizes, and shapes. That is why it can be hard for the average person to know what they just saw was in fact a Jellyfish.

The diversity among the Jellyfish has been something experts have continued to study over the years. That is also why they have been divided into various group species based on characteristics. Today there are over 2,000 species of Jellyfish that have been identified. Most experts believe that there are many more that they haven’t yet discovered though.

The lifespan of a Jellyfish takes place in the water. There they are able to move gracefully, quickly, and they can give the appearance of being very dangerous. When they end up on shore though is when people typically get a good look at them. If they can’t get back into the water they will surely die.

One of the most fascinating things about a Jellyfish is their ability to move around in the water. They are simple invertebrates but they have the ability to move in ways that others fitting that same category don’t display. It is believed that the wind and the current often play a vital role in the movements of the Jellyfish. Yet they can also move vertically in the water under their own control as well. They aren’t able to move horizontally on their own. 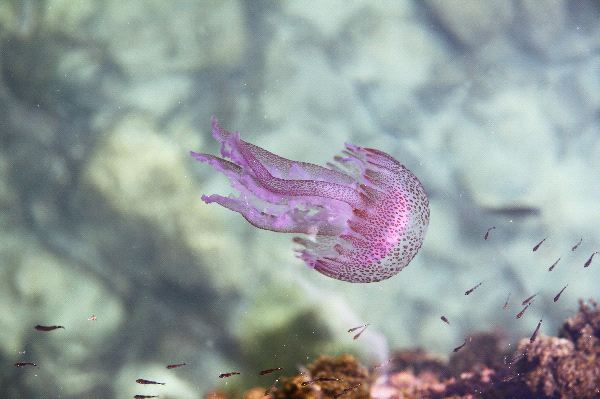 However, most people don’t understand this is a natural reaction. The Jellyfish isn’t a predator of humans. In fact, they don’t even have a brain! They are naturally designed though to release toxins through the tentacles when they come into contact with something or someone. That toxin can cause pain, swelling, and illness for a human that just happened to be in the wrong place at the wrong time in the ocean.

The lifespan of a Jellyfish is quite remarkable. They don’t need the opposite gender in order to create offspring. Experts believe that this is why the Jellyfish has been able to survive through harsh conditions including pollution in the ocean waters where they live.

However, that lifespan is also quite short. The longest that any of the species survive is up to 6 months. For others though they only live for a few short hours. The Turritopsis nutricula is an immortal jellyfish because it can revert to the polyp stage after becoming sexually mature.
The fast pace of their life from start to finish is something that experts continue to explore in great detail. Even with all of the information collected so far, they believe there is still plenty we don’t fully understand yet about the Jellyfish. They are committed to finding out all they can and sharing it with the public.