All Jellyfish have the ability to sting their prey. They do this though their tentacles that contain toxins. Jellyfish aren’t mean or on a quest to hurt people which is often the scenario that people think about in their minds. Instead, it is a trigger that occurs any time a Jellyfish comes into contact with anything. The pressure that builds up is lance like and that is what will pierce a person or another type of living creature.

The toxins can quickly move through the body of the aquatic life of the human. The toxicity level of the Jellyfish though will vary from one species to the next. Most of them only cause mild pain, a rash, and redness with swelling around the affected area. There are some Jellyfish though that can cause an allergic reaction. There have been fatalities due to such stings.

If you see one in the water or on the shore you are best to stay as far away from it as you can. In the Philippines, is estimated that up to 40 people per year die from a sting that a Jellyfish offered. More than 19 million people are treated annually for Jellyfish stings around the world.

The biggest problem in terms of Jellyfish sting toxicity has to do with blooms. This is a group of Jellyfish that live with each other in the water. Then instead of a person getting stung by just one Jellyfish it may be by several. This increased the amount of toxins that go into the body dramatically.

There are various types of treatment offered to help reduce the pain and suffering associated with any Jellyfish sting. Any time you go to the beach you should have those items with you so that you can take swift action. Get the person to shore and assess the area. It may be necessary to remove any tentacles from the body of the person. Sometimes they Jellyfish will still be attached to them. 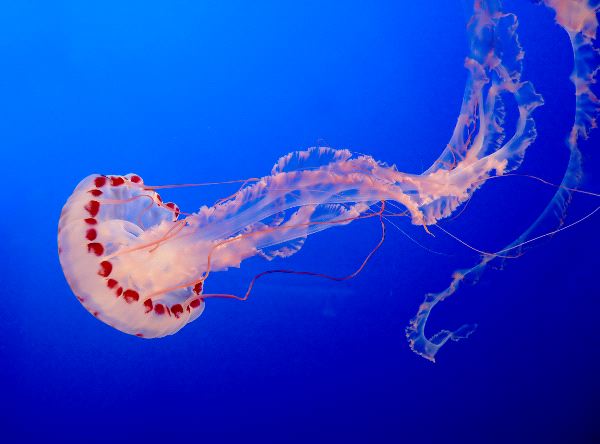 Pouring vinegar on the Jellyfish sting location is a great way to help reduce the pain that is being felt. However, it is important to note that this won’t work for stings that occur from all types of Jellyfish. Vinegar can be poured onto the area of the body or it can be dabbed on with a towel that you may have handy.

When there is nothing to use urine has been identified as a way to remove the sting from the skin. However, if a person has any open sores this can cause a type of infection. That is why urine should only be used as a last resort. There are reports that ammonia is a great idea but that is a harsh chemical. It does more damage to the skin than good so never use it.

A paste that can be created from baking soda and water can be applied to the area. It is a good idea to reapply it every couple of hours. Don’t apply ice or fresh water to the Jellyfish sting along. This can allow the toxin that is still around the area to be able to continue being effective and that means more pain.

For the swelling, itching, and redness that can occur due to a Jellyfish sting consider giving the person Antihistamines such as Benedryl. Make sure you find out if the person is allergic to them though before you do so. This is especially true if you are trying to help a complete stranger at the beach. There are such products for adults and for children so make sure you only give the right dosage. Too much of any Antihistamines can cause adverse health problems for the individual.