The Japanese Macaque is known as an Old World monkey which is native to Japan. The Japanese Macaque is quite distinctive however and can be also known as Saru which means monkey in Japanese. These monkeys can be found in both cold areas of Japan and warmer areas of the country also; however, Macaques from warmer areas weigh less than Macaques which are from the colder areas.

The Japanese Macaque can weigh nineteen pounds, which are females, and males can weigh more than twenty five pounds. There is a considerably difference between male and female; and it will be the same for height. Females are usually shorter than the males who stand at twenty two inches, whereas the females are around twenty inches.

These monkeys are very much like a human.  They do have a pink, naked face with expressive eyes.  Though, their tails are quite short at only around three inches for both male and female.  The rest of the body will have either yellow, brown or grey hair; and the coat can adapt to the different temperatures it lives in.  If the Macaque lives in colder areas, their coats can become thicker to heat themselves.

The Japanese Macaques move on four legs; they do tend to also walk on their hind legs at times.  Usually this happens when they are holding; and the Macaques have opposable thumbs. The female Macaques spend their time in the trees while the males like to spend their time on the ground.  They love swimming and leaping from tree to tree. 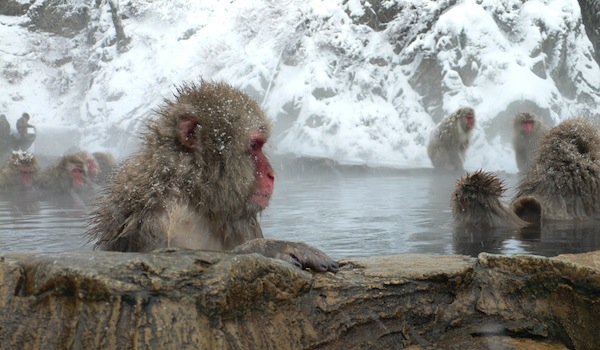 The Habitat and Behavior of a Japanese Macaque

These monkeys are exclusively native to Japan and love subtropical evergreen forests; usually, there are more numbers in these areas than deciduous forests. In Japan’s islands of Kyushu, Honshu and Shikoku are where these Japan Macaque monkeys are found; though some of the smaller islands also home these monkeys.

A group or a troop of Macaques usually home around 25-30 adults; this troop will be led by the dominant male.  His role will be to lead the group and he will be the one who will decide who will get the job to defend the troop against any intruders as well as where they will go.  There are also a few sub leaders which are also males; they keep order amongst the troop.  The troop has a good social bond which keeps them strong; and where some males will move on to other troops, the females don’t.  They stay in the same troop all of their lives.

Some all male groups exist but these groups only last for a short period of time due to the fact that the males are moving onto other troops. Some males spend time away before joining moving on and joining up to another group. The alpha male may be replaced by another if he loses his rank; and if a troop should break away, a new leader will be established.

All females will have high social relationships and have some of the better hygiene practices than many other primates. With grooming, the females will teach their young the various techniques to their young. Though, the Japanese Macaque has different vocal cries, these will range from warning, aggressiveness, defensiveness and peacefulness. The Macaque loves to make different expressions with their faces and body gestures also. 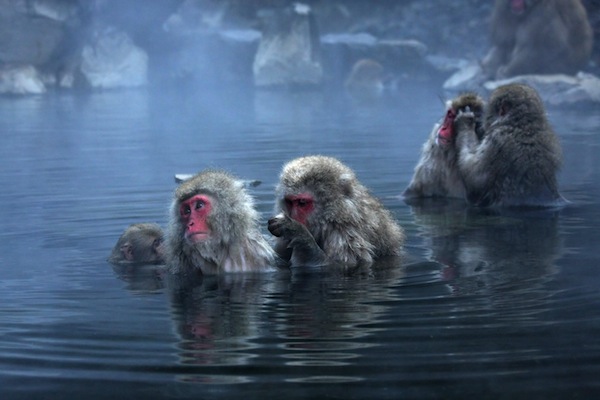 Japanese Monkeys at a hot spring

The Eating Habits of a Japanese Macaque

The Macaques in the north of Japan will eat nuts and fruit so that during the winter months, they can store up fat as some foods can be difficult to find.  Some will take to dig up plant parts underground such as soil or roots and on some occasion fish.

How Do Japanese Macaques Reproduce?

Most males will become sexually mature at just over 4.5 years old; and females are sexually mature at 3 and a half years. Though, all Macaques will have multiple partners during the breeding season. However, female Macaques are the only ones who will choose her mate; mostly the female chooses her mate that has a higher ranking.  Most females are pregnant for 6 months.