The rarest of the known flamingos, the James’s flamingo is sympatric, meaning it can be found in flocks of the Andean and Chilean flamingos, and will be wherever they are found. They are often found nesting in the same areas, and migrating together. It is also known as the Puna flamingo. Up until the 1950’s, this particular species was thought to be extinct, but a small flock was found at that time, in a remote location.

The James’s flamingo is hard to tell from its Andean counterparts, because of its similar coloration and size, and these flamingos are often mistaken with immature Andeans. They are often a lighter pink than the other flamingo families, except for the line of deeper crimson that runs along their necks. They stand about three-feet tall, enough to stand above the waters where they feed, and weight a little over four pounds. The neck of the James’s flamingo is long and angular, giving them a large range of motion from their heads and necks. The ankle joint is further up the leg, to allow for graceful movement while walking in the water, and bending down to scoop up their major food sources.

This particular breed of flamingo is most commonly found in the Andean wetlands, and South American mudflats. They are, like most other species of flamingo, highly migratory, and move to lower elevations when the weather gets colder and the wetlands begin to freeze. During the winter months, the James’s flamingos are most likely found in Bolivia, and some parts of Argentina, but some flocks can even migrate as far north as Florida. They are also commonly found in Peru and Chile, with other species of flamingos.

Flamingos in general have a highly ordered society, which seems to largely be based on feeding and mating habits. They are a highly colonial species, like most other flamingos, and can be found in groups that number as large as in the thousands of birds. They will even march through the wetlands as a colony, appearing as a throng of birds in a highly ordered line.

Because of their shape, to fly the James’s flamingo must get a running start, taking many long strides, before taking flight. While in the air, they stay fairly low to the ground, and must flap their wings almost constantly to stay aloft. They will often migrate in the colonies that they feed with. When landing, they must also slow before stopping, taking several running steps to slow their momentum from flight. These flamingos have been recording fly at speeds of over thirty miles per hour. 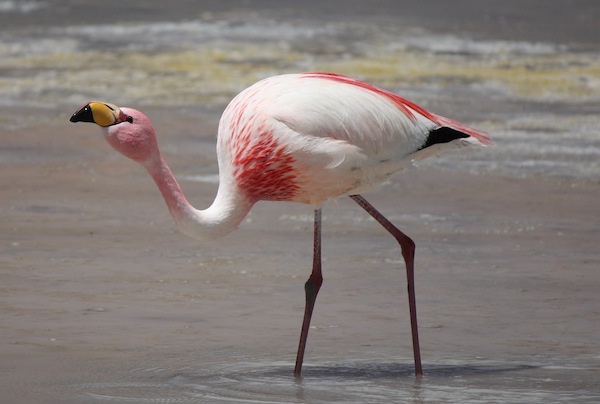 One of the most interesting features of the James’s flamingo, are its eating habits. Their primary food source is diatoms and other microscopic plankton, which they sift from the bottom of the water sources that they frequent. Their ability to filter sediment and water from the microscopic food sources is amazing, and they can sort through even the smallest bits of plant life.

The James’s flamingo has the finest filtering mechanism of any of the flamingo species, and have more of the gummy flaps than their counterparts, up to twice as many. These gummy flaps are known as lamellae, and it is the flamingos version of human teeth. This species of flamingo feeds closest to the shore, where the smallest diatoms and zooplankton reside.

Flamingo mating rituals are complex affairs, often involving a lot of wing flapping and neck craning. The entire colony often mates together, the males collecting together to form a graceful procession, and when the female chooses a suitable mate, takes the male of to the side to have intercourse.

The James’s flamingo generally reaches sexual maturity at six years of age, when it has achieved full coloration of it’s feathers. A mated pair of flamingos will lay just one egg, in a mud nest formed by their beaks and feet. The males and females incubate the egg together, for about thirty days, until the chick hatches.

The James’s flamingo is monogamous, meaning that it will choose one lifelong mate. If the mate dies, it may or may not choose another one during the next cycle. These flamingos will often skip a year in the mating cycle, only giving birth every other season. For the first year of their lives, the chicks are all gray.