Jaguars are iconic cats in any number of ways. They’re the only “big cat” found in the Americas; they’re elegant, beautiful creatures, with numerous mentioned in the myths and legends of the Mayan and Native American peoples. They’re used as symbols of power, beauty and strength; they’re present in rituals and healing techniques of times long past; they’ve been indicated as being one of the few animals through whom it is possible to communicate with the mostly-hidden spiritual world.

Despite – or, some say, perhaps because of the effects of – this reverence, jaguar populations are in decline. They’re described as “near threatened” by the IUCN, and they’ve been eradicated from most of the places where they originally made their home.

They’re brilliant, gorgeous, skilled animals who are perfectly designed for life in any number of conditions and environments. Their preservation is, thankfully, of paramount concern to many animal conservation organisations – and plans are in place to ensure that the jaguar population in the wild ceases its decline.

The first thing that one notices about the jaguar is its incredible coat. It differs from that of a leopard in that the rosettes have a black spot in the middle and the colours more stark – every minute detail of its patterning is distinct. Unusually, jaguar cubs are born with all their adult markings already in place – their bone structure develops and their shape alters as they grow, but their markings remain largely the same from birth to death.

The second thing to bear in mind when considering the physical characteristics of this beast is its bite. Most cats kill their prey with a bite to the back of the neck – but a jaguar’s powerful jaw allows it to crunch straight through the skull and slay its quarry instantly by sinking its teeth into the brain. Their bite is one of the strongest of any animal we know of – preceded only by the spotted hyena and crocodile – and allows it to pulverise bones and crack open the shells of even the largest turtles.

Jaguars are large, powerfully built, well-muscled creatures. They’re designed to be able to climb, crawl and swim. They are perhaps the sleekest of all the big cats, and their coats remain highly prized. Sadly, legislation has slowed but not ended the fur trade – it is still possible to buy jaguar pelts, and they are still illegally hunted for them in many places. 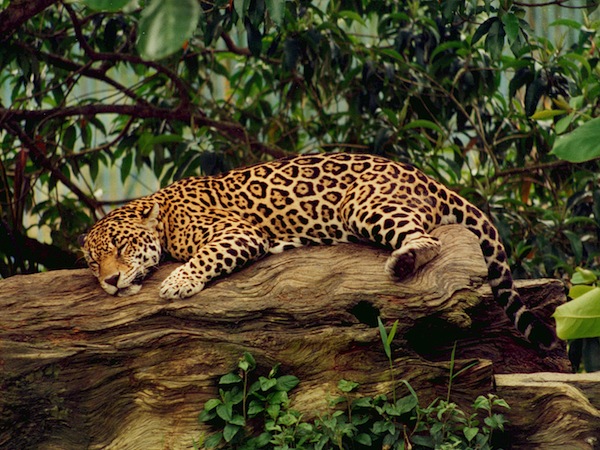 Today, jaguars are by and large only found in remote regions of South and Central America. They’re particularly common in the Amazon Basin, but this is still nothing in comparison to the areas they used to live in. They’re capable of adapting to a wide variety of habitats. Jaguars can live in swamps, grasslands, mountain scrub, woodland and rainforests – meaning that, given the chance, they can settle into any number of different areas and terrains. They do need rather a lot of space, though, and they tend to maintain large territories.

Like many cats, jaguars are solitary other than during the act of mating and for the period that a mother is raising her cubs. Generally speaking, adult jaguars meet only to court and mate – although certain anecdotal evidence has it that there is a small amount of socialisation outside of these times.

Jaguars have also frequently been observed engaging in play behaviour, though usually only among juvenile sibling groups. They love the water, and they’re often to be found hunting, bathing, swimming or playing in streams and pools. Jaguars are amongst the strongest swimmers of all cats, something that they share with fellow big cat the tiger.

It is common amongst felines that the males hold large territories that overlap with or in some cases entirely contain the smaller territories of one or more females. Jaguars are the exception to this rule – while male territories are usually roughly twice the size of the ones that females hold, they tend to be isolated and much further away from any other jaguars. The territories of females, however, do sometimes overlap – and there is a little small, anecdotal evidence of females very occasionally helping with the raising of cubs that are not theirs.

Males, however, are only tolerated in a female territory during the act of mating. They are driven out immediately afterwards, not least because of their tendency toward infanticide. 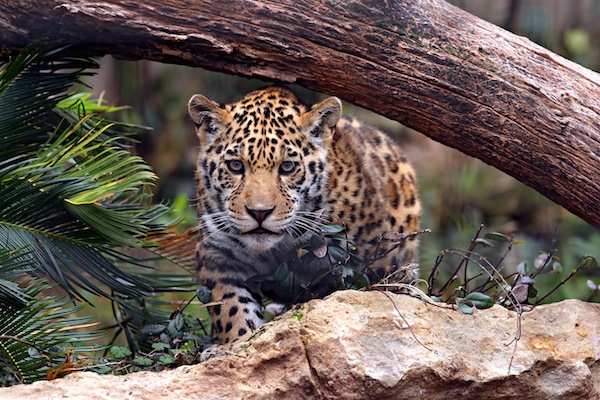 Like most cats, the jaguar will pursue every type of animal prey inside its range. Their preferred game, however, is either the peccary or the capybara – both large enough to provide a solid meal while also being slow enough to hunt with relative ease.

They hunt mostly round about the hours of dawn and dusk, spending both the depths of night and the heights of day resting and eating – or, in the case of females, rearing and teaching their young.

Once they’ve succeeded in mating and driving out the male, female jaguars retreat to a hidden den to wait out the approximately hundred day gestation period. Cubs are born helpless and blind, and are entirely incapable of doing anything for themselves until the third month of their life. They remain inside the den even after weaning, however, and do not emerge until they are six months old. From that time onwards they play, hunt, stalk and learn alongside their mother, waiting until they’re ready to strike out alone and find a territory to live in by themselves.

Jaguars are also unusual in that they mature at widely divergent times dependent on sex. Female jaguars tend to find their own territory round about their second year, whereas males will wait for most of a third year and then roam, nomadic, not settling entirely on a territory until they reach sexual maturity at the age of about four.