There are several different names that the Indochinese Tiger is known by. It is often called the Corbett’s Tiger after Jim Corbett.

This tiger can be from 8 to 9 ½ feet long. The males can weigh about 420 pounds for the males and around 250 pounds for the females. The females are often shorter too with an average length around 7 feet. They feature a light orange color with black stripes. They also have white on the belly, face, and tail.

There are several known locations where the Indochinese Tiger is found. They include the Southwestern part of China, Laos, Cambodia, Thailand, and Vietnam. These tigers live in the hills and mountains around secluded forest locations. They tend to be found in the lowland areas as well as the highland tropical regions. They can survive in both the evergreen forests and the semi evergreen locations around Indochina.

In many areas, these locations are off limits to exploration to help with protecting them. However, there have been some permits approved to allow researchers to find out some more details about the habitat and the status of these tigers in the wild.

There is little really known about the behaviors of these tigers due to their isolated and remote locations. They are believed to be aggressive and they may kill humans or livestock in order to survive due to loss of habitat and natural food resources. 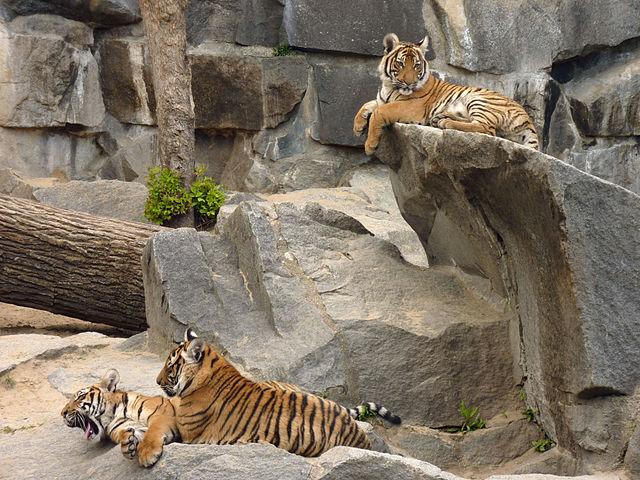 The diet of the Indochinese Tiger is mainly medium and large animals. This can include deer, pigs, serow, and bovids. One of the problems these tigers face though is that the normal food sources that were once available to them have become heavily depleted due to hunting by humans. Most of this hunting is illegal but efforts to stop it don’t seem to have the resources necessary to be effective.

As a result, many of them have been forced to make changes to their eating and rely on small sources of prey for survival. This can include deer, badgers, and porcupines. The problem is that this prey alone doesn’t give them enough energy from the food to really make up for what they spend to get it.

When there is little food, the body of the Indochinese Tiger is going to stop producing the hormones for successful mating. This can result in very few offspring and that is a major threat to their overall survival. Females are ready to mate around 3 years of age and males around 5 years.

It is possible though for these tigers to take part in mating during any part of the year. It will mainly occur though from November through April. The females give off a sent in estrus that attracts a male mate. The pair will mate for several days and then go their separate ways. Usually, a litter of cubs has 2 or 3 offspring will result, but there can be as many as 7. There is a mortality rate of about 35% within the 1st year of birth.

There haven’t been any Indochinese Tigers seen around China since 2007 and this has many concerned. A man is in prison for killing the last one and eating it when it was protected through conservation efforts. Today, this tiger subspecies is classified as endangered by the IUCN. It is on the verge of being upgraded to critically endangered, but the status of it is very hard to determine due to how spread out the remaining population is in the wild.

Illegal poaching of this tiger for the use of traditional Chinese medicine continues to be a problem. It is considered to be one of the biggest threats to the future of the Indochinese Tiger. Approximately 60 of these tigers are currently living in captivity in zoos around the world.