The Ibex is a type of wild goat with a bearded chin for the males and a very short tail. The males have horns that are very long and that curve at the top and then back down again. They use these horns for fighting and to protect themselves. Females also have horns but they are much shorter than those of the males. This is one of the 9 different species of goats in the world.

They are brown and gray in coloring. Their size ranges from 4 ½ to 5 feet tall. They have a very sturdy build as well. They have powerful legs and a body that can move quickly. They can weigh up to 220 pounds but the females are usually around 110 pounds.

The Ibex live in small herds that have about 20 members in it. The males have a strong odor about them that helps them to mark their territory. It also enables them to be able to determine dominance in their herds. The males usually live alone and only join an herd for mating purposes. There can be a great deal of fighting and aggression among the males to determine who will fight.

The Ibex can be very curious and adventurous. They can quickly climb up and down difficult terrain. This helps them to escape from any types of predators with ease. Even if a predator does see them, they won’t risk that climb or the amount of energy that it would take to reach them. 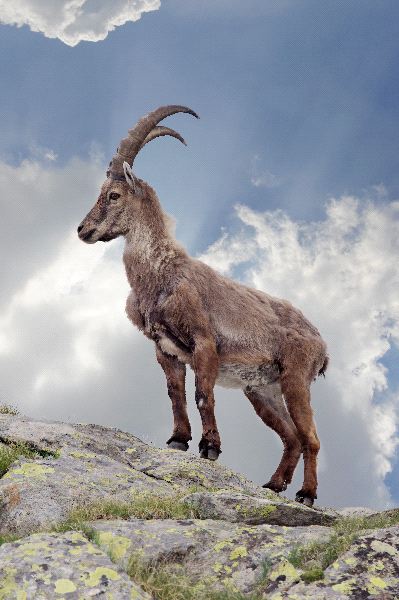 They are able to eat a wide variety of different types of vegetation. They consume mainly grass and bushes. They move around a great deal looking for food. They will consume types of vegetation that many other types of animals will skip over. They can spend several hours per day grazing and consuming food. Since there is very little nutritional value in the foods they eat, they have to take in a great deal of it.

The Ibex is ready to mate around 3 years of age for the females. It can be up to 6 years of age for the males, many of them won’t mate until much later due to the dominance factor. They have to be able to challenge stronger males and beat them if they are going to get the chance to mate.

The breeding season for the Ibex can be in the spring or in the fall, depending on their location. The males will fight with each other for mating and that entices the females to be with them. Once mating has occurred the male will wonder off to find another female to try to mate with.

The females will carry the young in the body for a time period that can range from 147 days to 180 days. The female may have up to 1 offspring, the young are very adventurous and they will be playful within the first 24 hours of life. They will drink milk from the mother’s body for about 3 to 12 months. They will often remain with her until she is ready to have her next mating season.