One of the larger parrots in the world is the Hyacinth Macaw. It is easy to recognize due to the blue coloring it offers. They have a body that can be just over 3 feet long. They can range in weight from about 2 pounds to about 4 pounds. It depends on location and food resources.

Like all Macaws the tail is very long. This particular section of the body alone can be about half his length. The colors of blue on the feathers often varies in places from light to dark blue. The colors blend in very nicely with each other to give this bird a magnificent appearance.

They have wide eyes that are black in color with yellow around them. They also feature yellow under the chin. The beak is dark black and curves downward.

South America is home to the Hyacinth Macaw. Brazil, Paraguay, and Bolivia are the three main places where there bird is found living in the wild. It tends to stick to regions that are along open rivers. This bird does do well in captivity as long as it is well cared for.

They offer a variety of calls that help them to interact with each other. They also use those calls to warn off danger. The most common use of them has to do with communication with their young. They form very strong bonds as a family unit. Such calls from the Hyacinth Macaw can be heard from very long distances.

They are sometimes seen in flocks. It is common for them to spend some time around others for socializing though and then they will fly off to be alone for a while. They can be very aggressive in the wild as well as when they are pets. 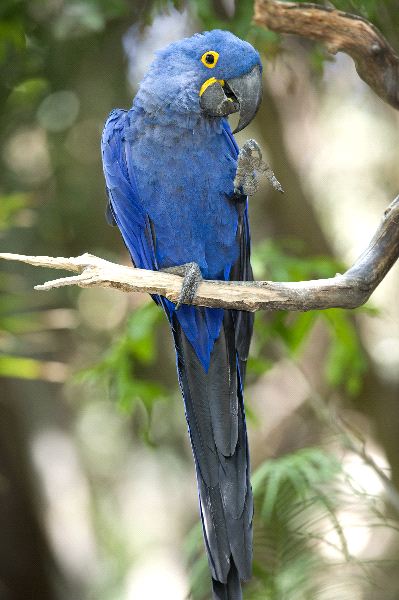 The beak of the Hyacinth Macaw is extremely strong. They allows them to get to the nuts that could be inside of very hard outer shells. They also use their beak to be able to open up coconuts in some regions. Fruits are part of their diet but they are likely to be seasonal. They will dine on them when they can though as they tend to be a favorite choice of this particular bird.

The males offer lots of calls and displaying of their feathers to gain the attention females. Once mating has occurred a nest is created in holes of various trees. They will have only 1 or 2 eggs to place into that nest. Both parents strive to keep them warm and well protected.

When there are two young, the first will emerge several days before the second. This means the second one is too small and weak to compete with the older one for food and it will likely die. In captivity it is common for that second one to be removed from the nest. This is a strategy that helps the number of Hyacinth Macaw birds to increase.

The young that do remain in the nest will be fed by the parents for about 3 months. Then they will be on their own to find their habitat and food. The Hyacinth Macaw is usually about 7 years old when it is able to mate.

The Hyacinth Macaw is considered to be endangered at this time. The loss of their natural habitat along with the pet trade has taken a significant toll on them. Even with conservation efforts in place including permits for the pet trade and stiff penalties against poachers it is tough for them to increase in numbers. 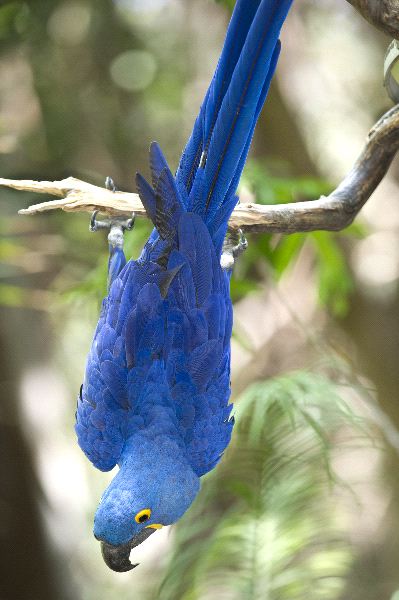