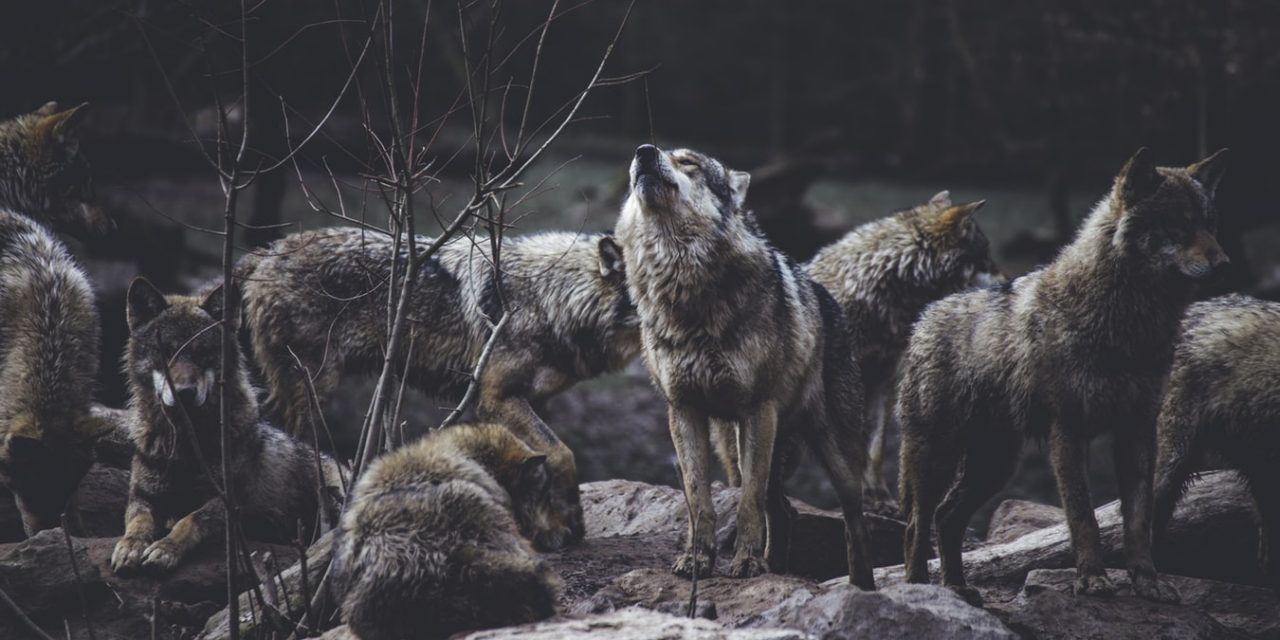 The largest living canine is the Canis lupus, or the Grey Wolf.  Some people hate them; some people love them. It all depends on your region. They are carnivores and prefer to hunt down their food. But what do we actually know about how these wolves hunt?

When they hunt together, wolves usually start at sundown and go all night.  They can run quickly for short periods, but their real strength lies in their ability to lope at a medium pace for hours and hours, following regular routes, tracking prey by scent, and by sight.  Their ability to communicate and form intelligent strategies is an important part of how they hunt.  Wolves howl mostly before and after the hunt, to gather the pack together.

When hunting, they prefer to remain silent, so they communicate partly by body language — focusing their gaze at the same thing other wolves are looking at.  They hold their heads level and their tails down when on the hunt, but this can change if they need to communicate something.  They learn and develop new strategies quickly.  For prey about the size of an elk, four wolves make an optimal pack size; larger prey is safer to hunt with larger packs.

Surprisingly, wolf scientists have found that wolves hunting alone or in mated pairs can be more successful than wolf packs, although that depends on the size of the animal being hunted.  When hunting during the summer, wolves are less likely to hunt in a group and more likely to go solo.  They’re also more likely to abandon the idea of chasing something down and just try to ambush dinner.

While a pack of wolves can take on something massive like a moose or a bison, single wolves are better off hunting smaller animals which are less dangerous — birds, rabbits, and beavers are examples.  Still, scientists have shown that even a single wolf can still triumph over a mighty moose on occasion.

Bringing Down Their Prey

Wolves can easily be hurt or killed in a fight with a large hooved animal, many of whom have evolved defenses specifically for this purpose.  Rather than going after a large herd (which is more dangerous), wolves prefer to take on a few animals at a time.  Wolves are smart, and they aren’t interested in a fair fight; if the animal stands its ground, the wolves will usually give up and leave — or try to scare it into running.  Once the herbivore tries to get away, the chase is on.

The wolf tactic is to sprint up to 40 mph and lunge to deliver debilitating bite wounds so that the animal can’t run anymore.  On large critters like a moose, wolves will often try to go for the rear legs and cripple it, then keep their distance and rest while it becomes weaker from blood loss.  Smaller animals like deer may just be killed immediately with a bite to the throat or even penetrating through the skull.

Stocking Up for the Future

Wolves have been shown to be able to think ahead and plan for the future. While they normally don’t kill more than they need, in certain times this behavior will change; scientists call this a “surplus kill.” If wolves think they need to stock up a food supply to wait out a heavy snowstorm, or maybe if there are a lot of young wolves waiting for dinner back in the den, wolves may kill excess animals and save them up for later.  This happens more commonly with smaller animals which are easier to kill quickly.

Wolves often focus on hunting the weakest of an animal’s herd or pack. This natural selection can then strengthen the remaining group of animals. Because of this, wolves can actually be a great help to other populations in the animal kingdom.