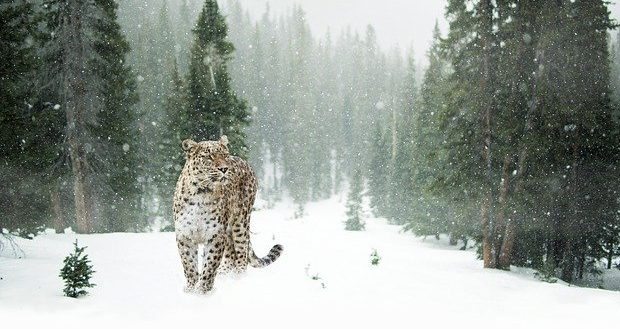 Snow leopards are some of the world’s rarest and most unstudied big cats. There are several reasons as to why scientists know so little about snow leopards, one having to do with the snow leopard’s camouflage. Their elusive appearance not only fools prey but researchers as well! Despite the difficulties in trying to find snow leopards in the wild, scientists have been able to learn quite a bit about their behavior and hunting patterns.

For the most part, snow leopards roam solo, marking their territory wherever they go in order to communicate with other snow leopards. The only time they physically associate with one another is during their mating season. They do not hunt in packs, therefore making hunting a solitary experience.

Snow leopards do not have a den they return to each night as they are always on the move. They will sleep in different spots nearly every night. This is how they track and capture their prey. Wherever the prey goes, so does the snow leopard.

Snow leopards will spend up to a week tracking and pursuing an animal. Once they are ready to make the kill snow leopards will attack from above. After taking it down, it takes 3-4 days for the big cat to eat the carcass. They stay near it at all times.

Due to their habitat, snow leopards follow the seasonal migration paths of their prey. Snow leopards live among the mountains of 12 different countries ranging over south and central Asia. They tend to keep to the steep, rocky slopes and alpine steppes above the tree line.

Snow leopards are most active during the night and twilight hours of dusk and dawn. The power of their eyesight and low light vision allows the snow leopard to hunt in near darkness, making this the perfect time to seek out the next, unsuspecting animal.

What Do Snow Leopards Eat?

Snow leopards eat all sorts of animals and stick to territories that have a low number of other predators. More prey for the snow leopard!

They eat anything from ibex, argali, and urial sheep to wild boars, yaks, and turkey-size snow cocks. If the wild prey is not available, the snow leopards will eat domesticated animals. Snow leopards have also been known to eat Myricaria, a feathery shrub.

Despite the wide range of prey that snow leopards eat and their ability to take down up to three times their body weight, they generally keep to smaller prey such as wild goats, sheep, marmots, pikas, hares, and birds.

How Their Body Helps Them Hunt

A snow leopard’s tail is unusually long and vital in its balance and staying warm. There have even been stories of snow leopards waving their tails to attract curious prey closer to them. Can you imagine the snow leopard using its tail like a lure? Snow leopards are generally 39-49 inches in length, but that measurement does not count the tail, which can be 31-39 inches long. That’s about 70% of the cat’s body length!

An adult cat weighs between 80-120 pounds and stands about 2 feet tall at the shoulder. Snow leopards have long, thick, white fur to keep them warm in their cold, high altitude homes. Their black spots are arranged in distinct rows that can sometimes continue on down the tail—this aids in its ability to camouflage.

Snow leopards’ front legs are short but very powerful. Combined with strong chest muscles, the cat can climb and sprint through the rugged terrain of their home. Snow leopards can leap up to seven times their own body length with the aid of their long, muscular back legs. These characteristics make hunting that much easier.

The paws are wide and cushioned with extra fur to help the animal grip rocks firmly and help the big cat move silently. Since they are ambush hunters, the more silent they can be, the better.

Everything about the snow leopard helps them stalk and capture their prey, from their muscular body and large tail to the camouflage that makes even scientists wonder where they are. You may not be able to see the snow leopard, but chances are it can see you. You definitely do not want to be the next poor wild goat tracked by the snow leopard.