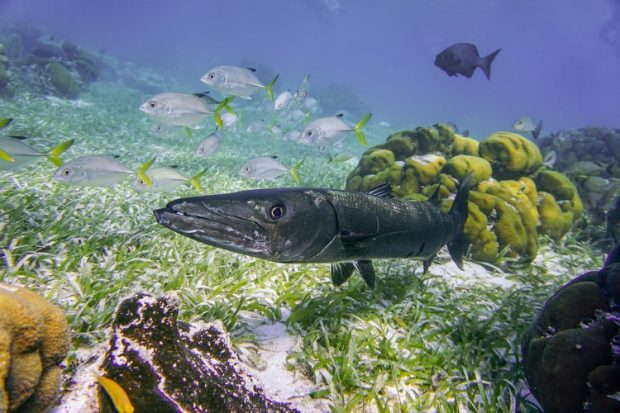 Barracudas are slender, muscular fish with a mouthful of teeth. They are found in the warmer waters of the Atlantic, Pacific, and Indian Oceans in addition to the Caribbean and Red seas. Unfortunately because of their looks and teeth, barracudas have been the stars of films and given a monstrous reputation.

Barracudas eat fish such as small tunas, jacks, grunts, groupers, snappers, killifishes, herrings, and anchovies. They have also been known to eat crustaceans and squid. Barracudas hunt using two main strategies. The first is sitting and waiting for prey to come close. When barracudas ambush they attack before the prey even knows that danger is close.

The second method barracudas use to hunt is the active prowl. The barracuda is capable of incredible speeds. They cannot go very fast for very long, but they can put on a sudden burst of speed in a split second. The barracuda has been known to swim up to 35 mph. They spend most of their time swimming at a leisurely pace and hit the gas when prey is close.

Barracudas prefer to live in warm waters where the temperatures stay between 74 and 82 degrees. Adult barracudas live around coral reefs that provide plenty of hunting ground for the fish that can easily get into cracks and crevices. Barracudas are also known to live in seagrass beds and mangroves. Barracudas stay primarily in saltwater though some varieties of the species can stand brackish water sometimes. Brackish water is water where freshwater and saltwater mix.

Barracudas have elongated, sleek bodies that taper at both ends and thicker in the middle. A barracudas head is a little flattened on top and pointed in the front. The two dorsal fins are far apart while the pectoral fins are low on the body. Most barracudas are dark on top with silver sides and a clear line that extends from the head to the tail on each side of the fish. The caudal fin is forked a little and curved on the trailing edge.

The jaw is very large and the lower jaw is longer than the top. They have a mouthful of two rows of sharp pointy teeth. The outer row of small but very sharp teeth is for tearing flesh apart. The inner row is long, dagger-like teeth to firmly grasp prey. Some of the teeth even point backward as an extra way to grasp squirmy fish.

Smaller varieties of the species only grow to be 20 inches long, but the larger varieties can grow up to 6 feet or longer.

The exact location and time when new barracudas are spawned are not yet well known. Scientists have been able to figure out that mating takes place in deeper waters offshore and probably during the spring. Females release the eggs and males fertilize them in open waters. The eggs are then dispersed by the currents.

Barracuda larvae live in shallow, vegetated estuaries and leave them when they have grown to about 2 inches in length. The young will then remain in the mangrove and seagrass habitats until they are one year old. Dominant adult barracudas tend to swim solo. However, juveniles and adults will sometimes gather in schools to hunt together or protect themselves.

Barracudas hunt using their keen eyesight. Many other fish hunt relying on smell, but the barracuda are attracted to fish that are shiny. They will move through the water scanning for flashes of movement from quick, silver or white fish. Because of the barracuda’s good eyesight and attraction to shiny objects, this causes misunderstandings between the fearsome fish and humans. Divers and swimmers who wear reflective objects such a watches or anything else shiny can find themselves the objects of inquiry from a curious barracuda.

The barracuda is not necessarily attacking the human, but humans often mistake the curious bump from a barracuda as aggressive hunting behavior. The most important thing is to stay calm if you’re approached by one of these misunderstood, curious creatures.