One of the species of Baleen Whales is the Humpback Whale. The very distinctive hump on the back that is also where their name comes from makes it very easy to identify this species. They are quite large and they seem to be a type of what that people are very interested in observing and learning about.

The Humpback Whale is very large, and they have a wide range of sizes. They can be from 39 to 52 feet long when they are fully grown. They can weigh as much as 79,000 pounds. The females are a bit larger than the males. The overall body coloring is dark gray and there can be white or cream on the pectoral fins and the belly. They have distinct marks under the flukes which can be used to identify them from each other the way that humans rely on fingerprints to do so.

They have a body featuring long pectoral fins. They also have a large head. They feature black colors on the dorsal fin. There are tubercles on the lower jaw and head. The tail is often seen when they are coming to the surface of the water. The tail fluke is long and can be up to 1/3 of their overall body length. It is also black in color.

This whale species features from 270 to 400 dark colored baleen plates on each side of their mouth. They can be from inches to 3 feet in size. There are ventral grooves in the lower jaw that help them with gathering prey and swallowing it. They feature two blowholes, and it is believed that they are able to send blow up to 20 feet in the air.

When migrating, the Humpback Whale is usually found in deep waters. They don’t come to the coastal areas until they reach areas of New York and Massachusetts. While they are migrating, they tend to remain close to the surface of the water. When they are feeding they tend to stay in shallow areas. Some of them make a migrational journey of over 5,000 miles! 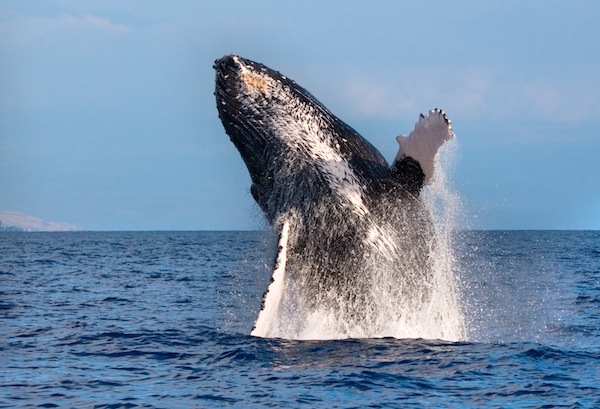 Humpback Whale Breaching out of the water

The male Humpback Whale is very popular for the amazing and complex song that they create. It can last for up to 20 minutes from start to finish, and they may repeat it for hours at a time. It is believed that the role of such songs is for attracting mates but that hasn’t been verified. Females vocalize as well, but they don’t sing the songs. What is interesting is that males in a given location sing the same song. Yet those in another sing one that is entirely different.

While these whales are social, they have a very loose organization. They may live alone or in small groups. They may move out of one group and into another with ease after a few hours or a couple of days.

During the summer, there seems to be more grouping due to finding food. There have been some bonds though where a pair have been with each other for months or for years. Females seem to create longer lasting bonds than males. They also take part in efforts for cooperative feeding than males.

While the distribution of the Humpback Whale often brings them into the same area as other species of whales, there is very little socializing with them. In bodies of water surrounding Hawaii though, they have been seen interacting and playing with Bottlenose Dolphins.

During the summer months, the Humpback Whale will consume as much food as it possibly can. They can consume up to 3,000 pounds of it per day! This enables it to build up layers of fat called blubber. They rely on that fat to help them survive the winter when they will live off those reserves. They will only rarely look for food in the winter, and will dine when they have an opportunity that presents itself. They are very energetic when it comes to feeding. They consume school schools of fish and lots of krill.

When it comes the various techniques that they use for feeding, they have the more diverse elements of all Baleen Whales. They use a type of technique called bubble net feeding where a group of them swim around a school of fish and blow bubbled at them. They close in tighter and tighter to confine them to a very small space. In just a few minutes, they can have a ring of food that is about 98 feet in diameter!

Fast speed moving and diving have also been noted for feeding. They create a frenzy with the fast movements and have their mouth wide open. They can swallow thousands of fish at once as the water they take in with the fish is filtered back out. The Humpback Whale is very mobile and they are able to evaluate the hunting situation and then implement only the best technique to yield great results. 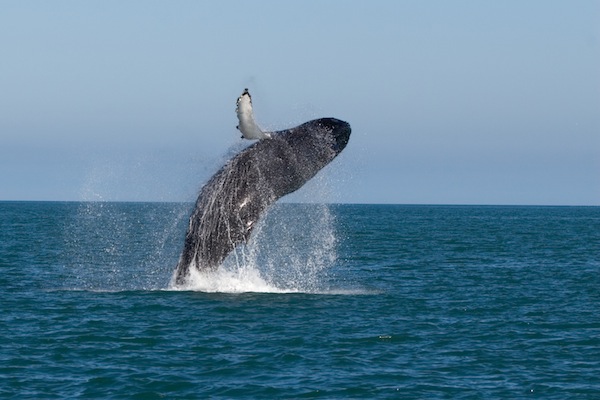 Humpback in the ocean

They are mature for mating around 5 years of age. Mating occurs in the winter, and the males will compete with each other for the females. They will chase the females and become increasingly vocal to get their attention. The males may use their tails to physically strike each other. After successfully mating, it takes about 11 months before the calf is born. They can be from 13 to 16 feet long. They can weigh up to 2,000 pounds. They will consume milk from their mother’s body for the first 6 to 10 months.

The young are born in the warm waters of tropical and sub-tropical locations. Females create a very close bond with their offspring, and are very protective of them. They will usually mate every 2 years, but in some instances, they are known to mate twice in 3 years.

The number of Humpback Whales was drastically reduced due to whaling efforts. It is believed that prior to laws implemented in 1966, only about 10% of their original population remained. There have been some improvements in numbers, but issues with vessels, commercial fishing equipment, noise, and pollution are all factors that still keep them from fully recovering. There is estimated to be about 80,000 of them in the wild today.