How Grasshoppers Become Swarms of Locusts 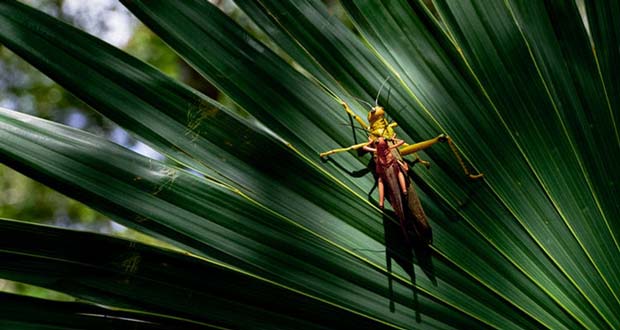 There are about 8,000 different species of grasshoppers on this planet and only about 10 of them could possibly change into swarming masses of locusts. Grasshoppers are usually solitary creatures that live in all parts of the globe. The only areas grasshoppers do not live are the very cold climates. After times of lots of rain food for the grasshoppers becomes bounteous. During these plentiful periods, the grasshopper population explodes. Despite the influx of the bugs they still remain alone instead of seeking out each other.

Frequently the time of plenty is followed by drought, causing the grains, grasses, and weeds that the bugs eat to disappear. As the food supply dwindles the grasshoppers are forced to come together. At first, this will not change anything in the bug’s behavior. However, as the numbers begin to increase the tipping point gets closer. When the food gets so low and the search for sustenance becomes so desperate grasshoppers gather in such large numbers that two things happen.

First, due to the large number and density, the grasshoppers become overstimulated. They rub against each other and their back legs get stimulated much more than if the bugs were apart. The second thing that happens is the serotonin skyrockets in their bodies. With the combination of stimulation and serotonin levels, the grasshoppers begin to change from bugs that stay in one place to nomadic. In a matter of hours, the grasshoppers become a nomadic, angry mass. They physically change from green to brown and look so different, that until the 1920s, they were thought to be two different species.

Once the swarm change takes over, the grasshoppers become locusts. They are able to fly and will move great distances in search of food. Sadly for thousands of people swarming locusts mean that their crops will disappear. Every bit of food will be consumed by the bugs. Crops will be severely damaged and fields stripped. In 2008 Australia was devastated by a swarm of locusts more than three and a half (six kilometers) long. Practically nothing stops the locusts. Only the ocean or complete loss of food supply will stop the bugs from wiping out all grains, grasses, and weeds in their path.

Scientists have discovered that if serotonin is not introduced into the grasshopper’s system they will not swarm even during circumstances that would usually cause them to do so. This finding was noted in the publication Science in January 2009. Grasshoppers that were purposefully injected with serotonin would change to locusts within two to three hours. However, if the bugs were given serotonin blockers they would remain grasshoppers even if they were placed in conditions that would have caused them to change.

Due to this finding scientists are now working on a chemical that will block serotonin from being produced in the grasshopper’s body. At this time invasions of locusts are controlled by pesticides that also wipe out other bugs. The new chemical would only target the grasshopper and leave the other insect alone.

The Dark Side to Grasshoppers

Grasshoppers are normally peaceful creatures living in the wild, feeding on all sorts of grasses, grains, and weeds. But unfortunately, like many other things grasshoppers have a dark side to them. When food becomes scarce the insects will change from solitary grasshoppers to swarming locusts; moving en mass to find any type of food. Research is being conducted continually to figure out what exactly causes the switch and what can be done to protect future crops from the total devastation locusts do to local farmer’s fields. That answer may have been found in 2009. Now we just need the solution.