Many people feel uneasy when they see the Horned Lizard due to the mean appearance of it. This has been the basis for many stories in various cultures over time. Some of those stories about the evil of Lizards such as this one have been circulating for hundreds of years. There are 15 subspecies of this particular Lizards that have been identified.

As you may have guessed from the name, the Horned Lizard features horns on the head. They are short horns that are found in a row along the crown of the head. They feature a body that is very flat and that resembles that of large toads. They have a very short but wide tail.

Both the tail and the sides of the body for this Lizard feature spines that are very sharp. It is no wonder that the Horned Lizard has fewer problems with predators than many other species of Lizards. The overall colors of this species are grayish with various areas of black, brown, or tan. The coloring often depends on the colors of the soil where they live so that they are able to blend into their surroundings.
Four species are also able to squirt an aimed stream of blood (with a very unpleasant taste) from its eyes to protect itself.

The natural location of the Horned Lizard is in many areas of Mexico and in the Western part of the United States. Arkansas is one of the places where you will find large numbers of them. Both Guatemala and British Columbia have a fair share of them as well.

This species of Lizard thrives in a habitat that is very hot and dry. They tend to stick to the sandy regions as much as possible. They have a very diverse span of locations though. Some of them live on the desert areas where the ground is too hot for just about all living things including humans. Others though live higher up in the mountain regions. 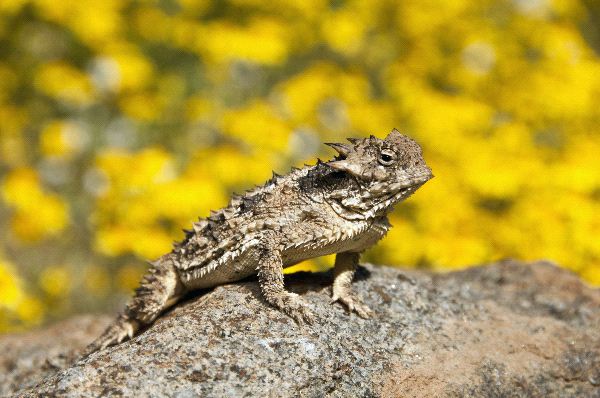 During the fall the Horned Lizard will bury itself in the sand. It blends in very well and so it is often able to hibernate there without being disturbed by humans or other living creatures. They will come back out in the spring as the temperatures start to warm up.

They are often see basking in the sunlight during the day on rocks. They tilt the body so that they are able to get the most heat absorbed as possible. At night they lie flat on the ground and will burrow up to 4 inches below the surface of the sand. This helps to keep them warm until the sun comes out the next morning.

The hotter the temperatures are, the more active the Horned Lizard is. Then they need to find more food than when they aren’t moving much. The diet consists of an array of insects, spiders, ticks, butterflies, and moths. They are opportunistic and will eat when food is available even if they have had more than enough already. One of their main diet staples are ants. They are patient hunters and will stand very stick. Then in an instance they flick out the long tongue and get their prey. 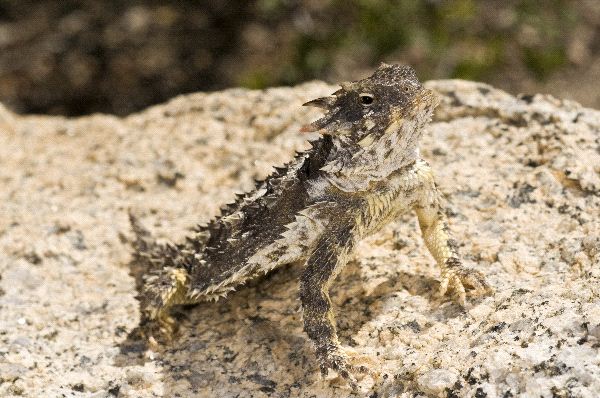 Mating takes place for the Horned Lizard from mid April until the end of July. The males will fight with each other for the ability to mate with females. After mating the male goes to find another female. The females will have to quickly find a place to create a nest as the eggs will arrive in just a couple of weeks.

The eggs are often covered with a layer of sand to help keep them warm and to keep predators away. Then the female will leave them and never come back. She may deposit from 10 to 30 eggs. The young have to hunt and find shelter all on their own.