The Hermit Crab is a type of crustacean. If you go to the beach to pick up seashells you may get a surprise. You any inadvertently pick up one of these crabs. If you leave it alone though it will come out of the shell and move around. They often have to abandon shells though and find a larger one as they grow.

The Hermit Crab has a shell that is also their home. They crawl in it and live in it when they need to rest or they fear what is around them. They have a long body and long legs that are very soft. Their bodies are quite vulnerable and that is why they have to rely on that shell to offer them plenty of protection.

They size of them will vary based on the species. Some of them are extremely tiny but the largest are about the size of a coconut. They can vary in color too but they are usually light brown or a shade of gray.

You will find the hermit crab living in a variety of locations. They are highly adaptable but they do need to be where they can find shells. This is why you will mainly find them living around the oceans. Hermit Crabs are often common pets that people find fascinating but that they also find them to be unique and easy to care for.

The Hermit Crab loves to climb and that is something that allows them to explore their environment. If you have one in captivity it should have a cage that it can use for climbing activities. They tend to be in their shells during the day but then come out at night and can be very active.

There have been some species of the Hermit Crab reported to make croaking noises. Experts are still looking into what form of communication that this serves. They feel it could range from alerting about dangers, finding a mate, or a simple way for them to be able to explore their surroundings and get feedback from other living creatures around them. 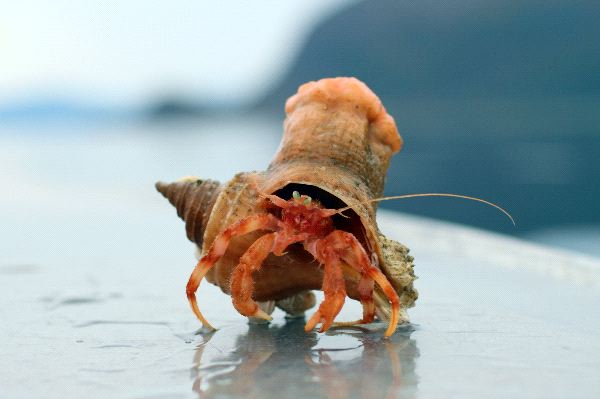 The diet for the Hermit Crab is very diverse. They consume both small insects and plants so they are omnivores. They require a balanced form of nutrients and calcium from their diet in order for them to be able to survive. They do have to drink water and this is fascinating to watch. They dip their claws into the water and then lift out small drops.

Mating for this Crab occurs during the late spring or early summer. The males offer sperm but the female will store it. She will use it to fertilize her eggs once she gets them to her destination. They do have an instinct to go to a spawning area to deposit their eggs. As a result they won’t mate in captivity.

The Hermit Crab young will start out as larvae. They will have their abdomen and some spines. After they molt several times they will become a young Crab. These young Crabs are often consumed by various predators both in the water and on land. Even though they have their shell to protect them, it is when they are out of the shell that they are very vulnerable to those fast predators. 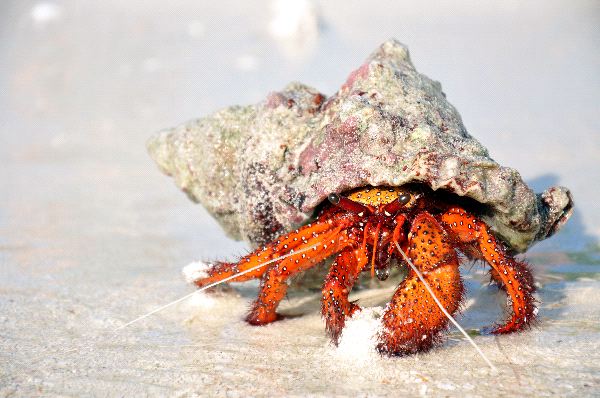