Some dolphin species, including the Hector’s Dolphin, are very rare. They are considered to be the smallest of all marine dolphins. The first person to notice them and research them was Sir James Hector, whom they are named after. He was a scientist from New Zealand but even today we still don’t have too much information about them.

With a torpedo shaped body, the Hector’s Dolphin is short and stocky in design. They are able to move with ease in the water though as the body becomes narrow further back. This is also one of the few species of dolphins that doesn’t feature a beak. They are light gray in color with white and cream on the belly. They have a stripe of dark gray that runs down the middle of the body. They also have a black mark that identifies around the flipper, the eye, and the back of the snout.

Females are larger than the male. The overall weight and size of the dolphins tends to depend on where they live and what they eat. They range from 3 ½ to 4 ½ feet in length and their weight is from 90 to 110 pounds.

New Zealand’s coastal waters is the only known place where the Hector’s Dolphins live. They are divided into four populations that are geographically located. They will only mate within that one population that they belong to. This is a problem though as one of the populations has only about 111 members. This is the one found between New Plymouth and Dargaville. Yet the fact that there are four populations out there is still a reason to have hope for their survival.

Hector’s Dolphins live in water that isn’t very deep, no more than 300 feet. They tend to stay within ½ a mile of the shoreline. However, they may venture further out during certain times of the year if necessary in order to find enough food. 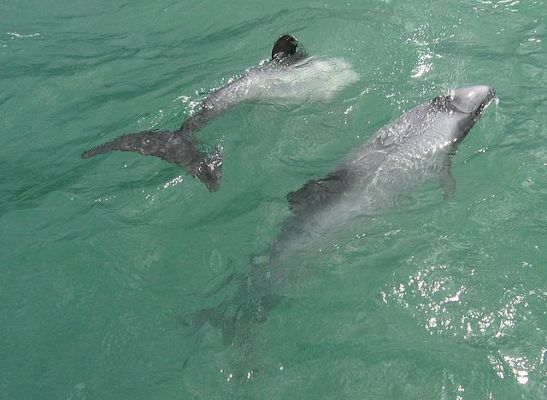 These dolphins are very social and they live in groups referred to as pods. They have strong bonds among the pod members and they also have many subgroups. It is possible for the dynamics within the pods to change over time. There are usually about 8 core members in the pod that are leaders.

The role that one may have changes over time too depending on their age. For example, the role is different for a juvenile than a mature dolphin. It is also different for a female with a calf than for an older female that is no longer mating.

Hector’s Dolphins have been known to be very aggressive towards each other. They may bite or blow bubbles at each other. They do have a great deal of fun too though such as tail splashing and chasing. They don’t swim as fast as other types of dolphins, but they are able to move around the water with ease.

They may stay under the water for up to 3 minutes before they have to come to the surface for a breath. They usually rely on clicking to communicate with each other. What is very interesting is that this species of dolphin doesn’t whistle. They are the only ones that don’t do so, and it remains a mystery why they don’t.

To help them find food, they rely on echolocation. This allows them to find out where it is located in terms of distance. They will eat fish and squid and with collaborative efforts of hunting they can round up large amounts of food in very little time. They will move to follow the fish during spawning season. That is when they move very close to the shoreline.

Mating times vary and they can start as young as 7 to 9 years of age for the females. For the males that range is typically from 5 to 9 years. Pairs spent plenty of time with various courtship rituals prior to mating. They may be seen chasing each other, displaying their belly, leaping, and touching. They swim very close to each other too during this courtship.

After a pair of Hector’s Dolphins have successfully mated, it can take from 10 to 12 months for a calf to be born. They are born with the fluke coming out first which is unusual for mammals. The young will be born in the spring or the summer and they will develop a close bond with their mother. She will give them milk from her body until they are about 2 years of age. However, they will be introduced to fish around 6 months of age too.

Hector’s Dolphins reproduce at a slow rate and that is a huge concern in regards to their population. The females may only mate every 4 years because she won’t when she has a calf to care for. If something happens to it, then she may mate every 2 years. In the wild these dolphins have a lifespan ranging from 20 to 25 years. 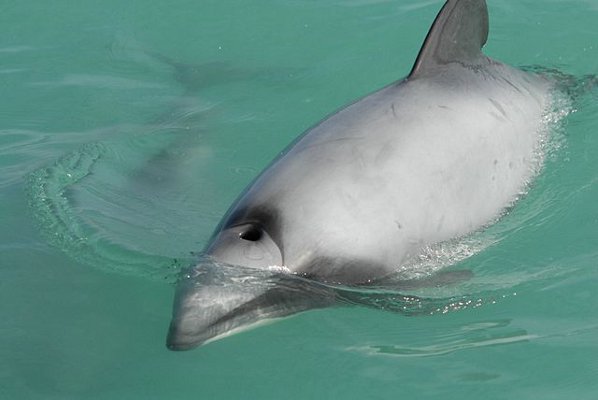 There is an estimated population of 7,400 Hector’s Dolphins in the wild. They are considered to be vulnerable right now due to problems in their environment that can deplete their numbers and due to their low rate of reproduction. One of the big problems for them used to be capture to be used as bait but that has seemed to diminish.

Pollution in the water is also a big concern as they are vulnerable to skin and internal problems from chemicals. The amount of stress that can be caused for them due to lots of boats around also has to be addressed. The stress is evident because they will swim very close to each other in the pods when there are boats around. They don’t do this when such noise isn’t in their environment. Limiting where boats can go and even the types of boats in some areas has been helpful.

Commercial fishing nets used to be a problem but that too is improving. The Department of Conservation created the Banks Peninsula Marine Mammal Sanctuary in 1988 to help offer refuge to those Hector’s Dolphins that had gotten injured.