One of the smaller species of sea turtles is the Hawksbill Sea Turtle. They move very slowly when they are on land due to the design of their bodies. They are about 3 feet long and weigh about 200 pounds when fully grown.

The shell of this particular species of sea turtle is one that changes over time. When they are young, it is heart shaped but that will change as they get older and the shell becomes longer. They have a small head and the mouth is similar to that of the hawk. It does feature more of a hook too than other species of sea turtles.

Along the front part of the body you will see two scales. The Hawksbill Sea Turtle have a pair of claws on each flipper. The body is well designed for swimming. They can be brown or black depending on the temperature of the water. They also feature areas of lighter and darker coloring on their bodies. It is believed this helps with them blending into their surroundings as a type of camouflage.

The Hawksbill Sea Turtle prefers to live in the warmer, tropical regions. They are found both in the Pacific Ocean and the Atlantic Ocean. However, they can be found in the United States living in some of the cooler areas. This includes New Jersey and Massachusetts. They are going to be found mostly in shallow, rocky areas. They tend to stay closer to the surface than other species of sea turtles too. Rarely are they found more than 65 feet below the surface of the water. You will be able to find these sea turtles living in regions where there is plenty of coral reef.

The Eretmochelys imbricata are found in the coasts of Africa, South America, Australia, Red Sea, Japanese Archipelago and New Zealand to name a few.

There isn’t much to share about the known behaviors of these sea turtles as they haven’t been observed enough. They are believed to travel the least amount of distance though for mating and for their nesting grounds. 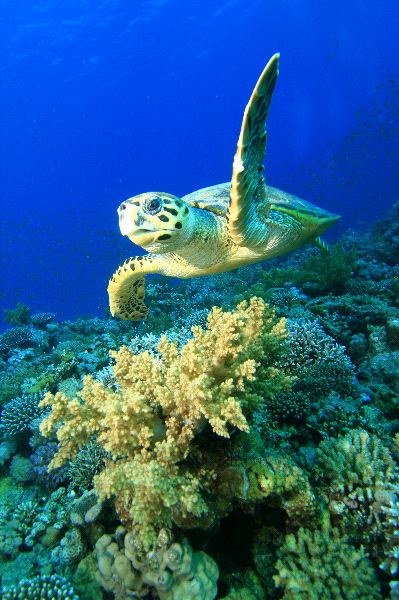 Sea sponges make up the majority of the food source for the Hawksbill Sea Turtle.  It is believed that is what they eat 95% of the time. What is interesting though is that they are very selective about which of them they will consume. They will leave some of them unless they have a very limited food source to pick from at that point in time. Other types of food sources for them include worms, small fish, jellyfish, and crustaceans.

This species of sea turtle is able to mate when they are from 3 to 10 years of age. This is significantly younger than most of the species out there. The females will only make every 2 or 3 years. Mating will occur in the water close to the beach that is very shallow. The females are the aggressors and they will pick the male they wish to mate with. Some studies indicate that they will mate with the same male each time, but there isn’t enough information to verify such theories at this time.

When it is time for the eggs to be deposited, the female will make her way to the beach. Even though the Hawksbill Sea Turtle is slow moving, they are very good at climbing. The females often face the challenge of rocks and such to be able to get to shore to deposit their eggs. This process usually occurs 3 times each mating season, about 15 days apart.

The eggs will be placed in clutches with anywhere from 100 to 140 eggs at a time. She will take the time to cover them back up. The sand keeps them moist and helps to protect them from various predators on the beach. It will take about 2 months for the hatchlings to emerge and it take them several days to dig their way out and then go to the water.

The young have to survive at the surface of the water by the coastline. As a result, only a very small fraction of the young will live to adulthood. They can live up to 50 years in the wild. 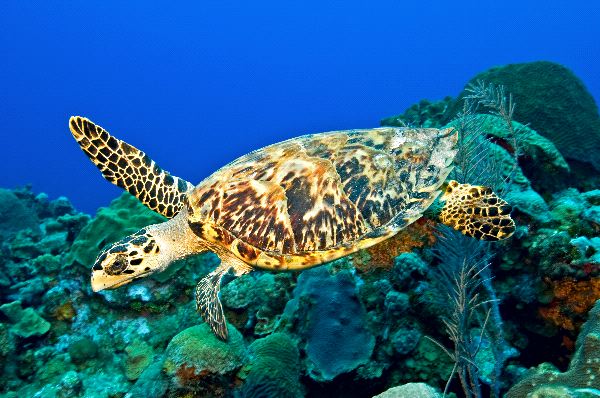 One of the risks for the Hawksbill Sea Turtle is that they have been consumed for hundreds of years for the quality of their meat. In many locations, their eggs are also taken and consumed. There used to be problems with the shells from these turtles being sold in Japan. However, that was banned in 1994 but still is believed to occur on some level on the black market.

Conservation efforts in many location now make it illegal to hunt for this sea turtle or to cause them any harm. They are listed as endangered but it is very hard to find out how many of them there are and how well the conservation efforts have improved their numbers.