When you think of bears in general, it may be the well known Grizzly Bear that you have a vision of. They are among the largest of all bears in the world so they definitely get their share of attention. Many early documentaries in the wild also covered this particular species so people are able to recognize them easier than when it comes to a variety of other species. However, they are quite often mistaken with other subspecies of Brown Bears due to the similarities in their features.

Grizzly Bear males can grow to be about 6.5-8 feet tall. The females are about 4-6 feet so there is quite a bit of difference with them as full grown adults. Males can reach weights of about 400-800 pounds, with extreme cases up to 1500 pounds, while females are often around 290-440 pounds.

Grizzly Bears are brown in color but the shade of it can range from golden brown to a chocolate brown. The older bears will start to get white on the tips of their coat.

The hump on the back of them is where they get their power and strength from. This is actually a muscle and this allows them to drag large animals they have killed great distances with ease. The nonretractile claws can be about four inches in length. They are powerful and allow them to dig, to break open egg shells, and to kill their prey.

The coat of a Grizzly Bear provides it with the insulation it needs throughout the cold time of the year. Many people don’t know that these bears shed the thicker part of the coat in the summer time. This coat also protects them from various types of insects or bugs. Like all bears, this one has a huge head and very powerful jaws.

The evolution process of the Grizzly Bear is still relatively unknown. They are believed to have travelled to North America approximately 50,000 years ago. They are subspecies of the Brown Bear and it is believed that due to environmental changes the Grizzly Bear ended up in the higher parts of North America. In order to survive it had to develop a different type of coat as well as the hump on the back to help it have the strength necessary for survival. 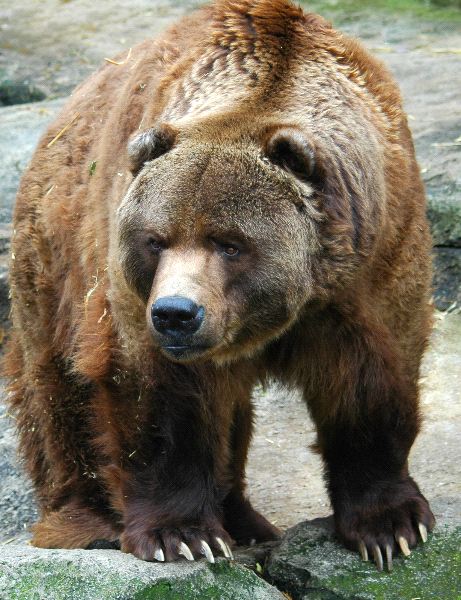 Once a Grizzly Bear is a couple of years old it will go off on its own. They do very well being alone and seem to prefer it that way. They may come into contact with each other for feeding purposes as well as to mate. The males are extremely territorial and they will mark their range heavily. This can be through urine, scratching at trees, and through making loud roars.

The males are also very aggressive when it comes to finding females to mate with. They will fight with other males for the right to mate in a given area. They will also fight with females that refuse to mate with them. Male Grizzly Bears aren’t very accepting of cubs either. The range of females can often overlap with that of a male. Generally they will ignore the situation unless she has cubs.

The males often will try to kill the young so that they don’t have competition. They also do so in order to get the females to mate again sooner. As long as she has cubs with her it can be several years between mating. Even though the females are smaller, they won’t give up the battle to save their young without a fight.

Several areas around North America are home to the Grizzly Bears. This includes Canada, Alaska and northwester United States.

One of the favorite foods of the Grizzly Bears is salmon from the rivers and Alaskan rivers offer plenty of great food for them. During the spawning of the salmon in the summer there are many Grizzly Bears in this particular area.

Grizzly Bears have a very large home range that they will roam through. It is common for them to spend hours a day walking around. They mostly move at a steady pace but don’t underestimate them. When they need to move quickly through their habitat it can be done so at a speed of up to 30 miles per hour.

It is very interesting to watch the Grizzly Bears catch fish. They will use their powerful claws to do so. They can be very patient waiting for the right moment to attack. Then with a quick swipe of the claws they will have their fish to eat. The young are amazing to watch as they practice this skill over and over again in order to get it right.

These bears enjoy a variety of other sources of meat as well. They will take what they can readily find around them. This ranges from very small rodents in the wild to taking down a full grown moose. Grizzly Bears are very skilled when it comes to hunting and they have speed as well as strength on their side. They will also consume leaves, tree bark, nuts, and seasonal fruits. 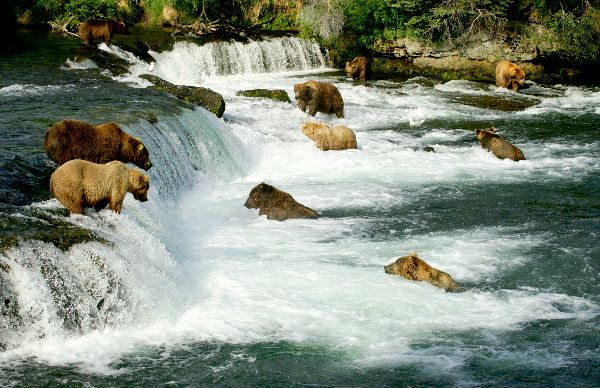 The Mating season for Grizzly Bears starts in mid-May and will continue until the middle of July, with cubs born between the end of January and early March. The males will become increasingly aggressive during this period of time. They don’t want any other males in their area but at the same time they are trying to reach the females whose scents they are picking up on. The courting is very simple with the bears chasing each other, play fight or even nuzzle.

After mating the male and the female will go their own ways. The males may find several females to mate with during any given mating season. The younger males aren’t very successful at finding mates though. They are often ran off or defeated by the older and more powerful males.

The time it takes for the young cubs to be born can range from 180 days to 270 days, including the time of the delayed implantation. There will usually be two cubs born but sometimes there is only one. These cubs are very small at birth, weighing only about one pound. The females are exceptional when it comes to nurturing and caring for their young. They will keep them with her for about 2-4 years. Sometimes the young cubs are ready to go on their own though when they are 2 years of age.

Grizzly Bears aren’t faced with any real predators in the wild. They can be their own worst enemies though. Battles that ensue between the males or when a female is protecting cubs can cause death. When food is scarce these battles become more common.

Humans though pose a huge threat to the survival of the Grizzly Bears. There are only 1,000-2,000 of them remain in the lower 48 US states, although in Alaska and Canada is believed that there are 30,000 Grizzly Bears.

There are many trophy hunters out there that want to score one of them. The thrill of killing such a powerful and rare animal seems to be more important to them than seeing this species of bear have some type of future.