One of the larger species of sea turtles is the Green Sea Turtle. It can be up to 400 pounds and as long as 5 ½ feet. They are a common tourist attraction that people love to observe when they come to Hawaii during certain times of the year. This is a big part of the economic development there as well as educating people about the value of these sea turtles.

Many people are surprised that this sea turtle has such a name because it isn’t green. It is more of a dark brown or olive color. The name for it comes from the fact that it has fat that is green in color. However, the top of the shell can be various shades of orange and red too. The coloring will actually change at different points in their life. The body of this sea turtle is large and the carapace is tear drop shaped. They have very large flippers that look like paddles.

The snout of this sea turtle is very short and it doesn’t have a hooked beak. The lower jaw has a serrated element to it. On the surface of the head there is a pair of pre-frontal scales. The carapace offers five central scutes and then four pairs of lateral scutes. The underside of it also has four pairs of scutes.

The sub tropic and tropical regions are home to the Green Sea Turtle. The largest population of them is believed to be around Hawaii. They are also known to live in Asia, Australia, and the waters around Mexico.

They are known to migrate long distances – even thousands of miles – to find food, for mating, and to reach their nesting ground destination. They tend to stay closer to the shore than other sea turtles so they are more observed at the surface of the water and out of the water.

They are known to go to the shore during the day and just soak up the sun. There isn’t a great deal of other information well known about their behaviors. 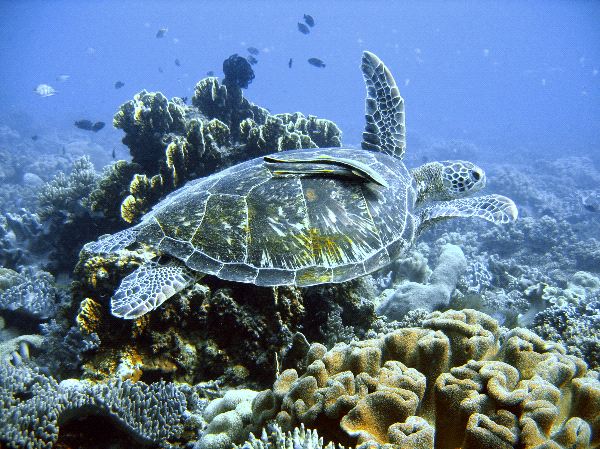 The young Green Sea Turtles feed on meat, and will do so for about the first years of life. Then they will start to eat various forms of plant life include sea grass and algae. By the time they are fully mature, they are going to switch to a diet that is only plant related.  They will start to eat much more though as they switch to plants because they aren’t as filling as meat. They do need to get air about every 5 minutes, but still they are known to be deep divers to get food.

For the Green Seat Turtle, mating won’t occur until they are 15 or more years of age. Usually, that time frame is more dependent on their size than on age. The larger they get, the more likely they are to start mating. Males will return to the location where they were born to find a mate annually.

This could prove to be a short distance or a very significant distance. Females may end up at the location where they were born but they tend to have several breeding locations that they can pick from. Some females go to the same location year after year but that isn’t always the case. The females don’t mate annually, only ever 2 to 4 years. Once the females are ready to lay their eggs, they go to the shore and they will dig a nest to place them in. She may offer from 100 to 200 eggs and then cover them up to protect them from predators and the elements.

The hatchlings will emerge a couple of months down the road and then dig their way out. They will then make the journey to the water, but only a small fraction of them actually make it.  In the wild, they can live up to 80 years. 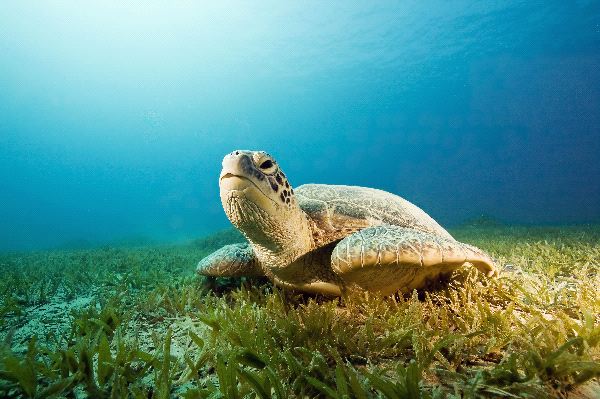 Like all other species of sea turtles, this one is on the list of endangered species. There are conservation efforts in place to try to protect them as much as possible. A big part of that protection involves being able to preserve the beach areas where they bask in the sun and where the females deposit their eggs. Tourists are welcome to see them in many areas including Hawaii but there are limits in place about where they can go to do their observations.

Keeping the waters clean of debris, chemicals, and trash is important too in order to conserve the environment for the Green Sea Turtles. They are very vulnerable to disease and it is believed such pollutants in the water can increase the risk of tumors forming on their flippers.

In some locations, consuming the meat of these sea turtles has occurred for very long periods of time. As a result, there are many adult Green Sea Turtles killed to be harvest for that meat. Increasing numbers can be tough due to the volume of eggs that are taken by humans for food as well. Even though efforts have been implemented to reduce them being used for food it still continues on a very large scale.

Another common issue for their conservation has been real estate development. The locations along the beach front are considered to be prime locations for building homes. Yet this means these sea turtles have less area to place their eggs than before. It can be difficult to get such beach locations preserved though so that homes aren’t being built there.

Due to the increased technology for commercial fishing, these sea turtles often get caught in traps or nets and they aren’t able to surface for air as they need to. They can also become very injured due to being trapped or getting too close to boats in the water.