The Green Iguana is often referred to as the Common Iguana. It is one of the larger species of Lizards. This is one species that is very often kept as a pet due to the exotic nature of it. They can be very demanding to care for though so it isn’t something that a person should do without thinking about the time they will need to dedicate to the needs of the Lizard.

The Green Iguana is about 5 feet in length and it is a light gray or green color. They have very light yellowish coloring down the front and under the belly. They typically will weigh about 20 pounds. However, their region where they live will influence how much they weigh. Some don’t eat as much due to their habitat and so they are on the lighter side.

This species of Lizard has a very wide tail that is strong and powerful. They can use it as a whip when they feel that they are in danger. Since they can’t run as fast as smaller Lizards this is a type of compensation that allows them to defend themselves as best as they can. They also feature a row of spines along the back that allow them to be well protected.

Central and South America is where this species of Lizard can be found. They span a very large geographical area though. They are mainly found around Paraguay and Brazil. However, they have also been identified in the North around Mexico and down to the Caribbean Islands. There are some found in the USA around Florida and Texas. They are also heavily populated on the islands of Hawaii. 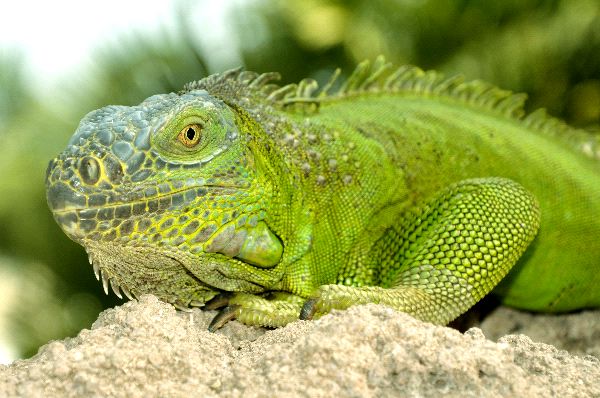 The Green Iguana has a very calm and gentle demeanor which is another reason why it is very often kept as a pet. They tend to be very curious about their surroundings and cover a wide home range. For the most part they are tolerant of each other being in close proximity. The exceptions are when it is time for mating and when there is a shortage of food.

The Green Iguana consumes only plants, fruits and shrubs. They don’t consume any type of meat even though such myths continue to circulate. Chances are it is because of their size that it is assumed they do consume meat. They do have very sharp teeth and they use them to shred leaves. When they are kept as pets humans have to be careful as those teeth can easily break through the skin. 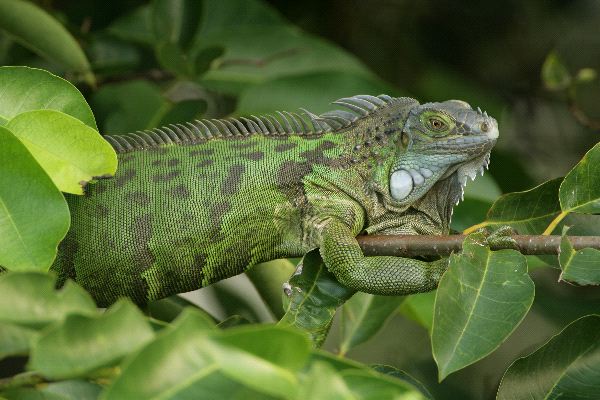 The males and females give off strong scents that become even more dominant during the mating season. The time of year when it will occur varies depending on the climate and location of the Lizards. After a pair have met up and mated the will immediately go their separate ways. The males will continue to find other females that they may be able to mate with.

The females will look for a place to create a nest for her eggs. She can deposit anywhere from 20 to 70 eggs at a time. She wants to offer a place where those eggs will be warm and also protected from predators. It takes from 10 to 15 weeks of incubation before the young emerge. The warmer the climate is the less time it takes for them to be able to emerge.

The females leave those eggs as soon as they deposit them. The young have to instinctively be able to find food and shelter from the second they are born. As a result there is a very high mortality rate for the Green Iguana but their numbers are still high overall.