The Great Flamingo is one of the most widespread of the six flamingo species. This flamingo is distinctly recognizable for its long neck, light pink color and black-tipped beak with a harsh downward curve. The Greater Flamingo appears more whitish pink than the American Flamingo that is very bright. It is the largest of all of the flamingo species found in Africa, Asia and parts of Southern Europe include Italy, Greece, Turkey and Spain – the Greater Flamingo is the state bird of Gujarat, India. In general is the largest living species of flamingo.

The juvenile Greater Flamingo appears grayish or white when it is born and does not develop its true pink color until it is several years of age. Their bill also takes a while to develop its full color – it is yellow when the chick is first born. Greater Flamingo chicks develop quite rapidly and are able to fly at approximately three months of age. The chick will then form a group with the other chicks to keep safe from predators.

One of the standout features of the Greater Flamingo is their downward curved bill that allows them to feed on small fish, insects, plankton, algae and small crustaceans. The lower portion of the bill is larger than the top portion, which is ideal for filter feeding and similar to the feeding mechanism of whales and oysters. The bill is equipped with a filter system with hair-like structures that allows them to filter food from the water and mud they pick up. It is one of the standout qualities of the entire species, but especially the Greater Flamingo.

The population of the Greater Flamingo spreads across the Middle East to northern India to Africa and the Mediterranean. There are limited numbers found in northern Europe. They can be found primarily in the coastal area or even further inward in lakes, swamps, lagoons or estuaries. Greater Flamingos prefer a habitat that lacks vegetation. An abundance of vegetation can prove to be competition for some of the flamingo’s diet. Vegetation may also attracts or gain the attention of predators.

Breeding populations are calculated for the protection of the species. As of 2010, the Greater Flamingo was said to have a breeding population of 180,000 pairs in Asia. The Greater Flamingos are not stationary birds; some of their populations migrate. The flocks that reside in Camargue, a town in Southern France, have been monitored closely since 1977. Their migratory patterns have been recorded. Scientists learned that the birds fly southwest in the winter to Turkey, Spain or Tunisia. Their migratory patterns are concerned with the direction of the autumn wind.

The population of the Greater Flamingo in the regions of Iran, West Africa and Kazakhstan is said to reach more than 300,000. The Saharan African population is estimated to be approximately 100,000 to 120,000. 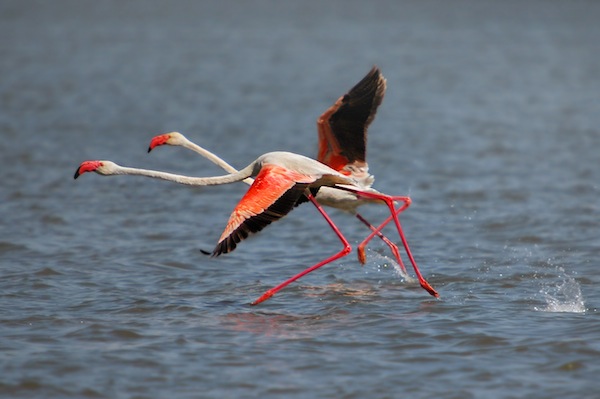 Greater Flamingos are social birds, like all flamingos. Their flocks can be very large and numerous. The great number of flamingos residing in a single area leaves room for aggressive behavior between the members of the flock. Sometimes Greater Flamingo males fight over nesting grounds or mates. The males can use their bill to fight or they have been observed chasing each other in the wild. They have other mechanisms of protecting and threatening other small birds.

Like all other flamingo species, the Greater Flamingo receives its color from its food intake. The color is specifically created when enzymes brake down the cartenoid pigments. Sometimes flamingos find themselves living inlands in dams that are polluted and not safe for life and food consumption. Pollution has cut off some of the Greater Flamingo’s food sources in some areas and this is detrimental to the breed.

Greater Flamingos follow all other flamingo species in that they breed irregularly. The species can breed every year if favorable conditions present themselves, in some locations they do, and sometimes not even once a year if there is a lack of food resources or rain. Greater Flamingos lay their egg on a tall mound like the rest of the species. The mound ensures the eggs safety from the heat, flooding and sometimes predators. Predators like felines, vultures and eagles prey on flamingo eggs. The males and females take turns incubating the egg and caring for the chick once it has hatched.

Some groups of Greater Flamingos like the groups found in Southern Asia migrate inland when it is not time for mating and closer to the shore when it is mating season. The mating rituals vary from group to group, but the species generally performs one or a mixture of the common mating rituals than involve moving their necks back and forth and a wing flapping motion.