The one shark species that just about everyone knows about is the Great White Shark. It has a reputation for being very aggressive to humans. It is also the one shark that was feared in the hit thriller Jaws. These sharks are currently in danger of becoming extinct due to their natural habitat being destroyed. Yet there are few that seem to think that conservation for them is important – not when they are such a danger in the water to humans.

This is one of the larger sized sharks in the world. They can grow as large as 20 feet and weigh as much as 5,000 pounds. However, they are still able to move through the water with amazing speed and agility.

The snout of the Great White Shark is very large and it is one of the most distinctive features that it has. They also have great control over movement due to the upper and lower lobes of the tail. You will notice that they are about the same size rather than one being larger than the other which is the case with most other species of sharks.

The top part of the body for this species of shark is a light gray. However, they also feature colors of brown or blue which many people don’t know about. The belly of them is a light cream or white color. Overall, they have a mottled appearance but it all helps them to avoid prey from noticing them. Their coloring allows them to blend from above as well as below the water.

The extraordinary senses that they have help them to find movement of living creatures into the water. They are able to use the electrical field and the vibrations to help them find even very small movements. Even for animals that are still, the heart beating is enough or these sharks to find them!

The teeth of this species of shark are extremely sharp. They are serrated and there are many rows of them. As the front row gets damaged, new ones will continue to rotate into place so that they can continue to bite into their prey at any age. Studies have been conducted that indicate the bite force from the Great White Shark is as much as 4,000 pounds! 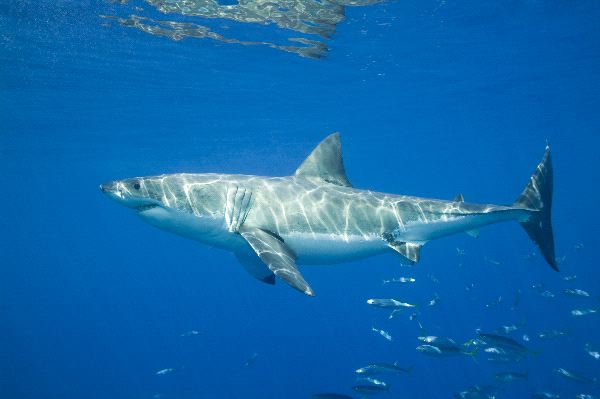 You will find the Great White Shark living in all of the oceans around the world. They tend to enjoy the habitat around the coastal areas. However, they have also been identified living as deep as 4,000 feet below the surface of the water. With that in mind, you really just never know where they may be found.

Migration is very common for the Great White Shark. They tend to move around for food, for mating, and to be able to stay in bodies of water that are the right temperature for them to thrive. During the cooler periods, there are more of them moving into the areas of Baja California to be able to benefit from the warmer temperatures found there.

Due to the aggressive nature of the Great White Shark, it holds the record for the most attacks and deaths for humans. This is also why so few people seem to be making it a priority to protect them in their habitat. The fact that humans also want to benefit from using the same water areas means the two are continually in conflict. Right now this shark species is declared as being vulnerable and at risk.

Unfortunately, there is still plenty about the behaviors and social hierarchy of the Great White Shark that isn’t known. They are simply too dangerous to do in depth studies with in their natural environment on many levels. At the same time, these sharks, like so many others, don’t do well in captivity.

However, it is believed that there is some type of dominance that is based on the size and gender. Females are the dominate ones over the males. They do stay together often, but when it comes to hunting they are independent of each other. They often take care of conflicts with displays of aggression.  They may bite each other as a warning.

They are very curious by nature and they are also believed to be very intelligent. They live in clans that can have as many as six members. They do seem to form some very solid bonds in that clan in spite of their aggressive behaviors. 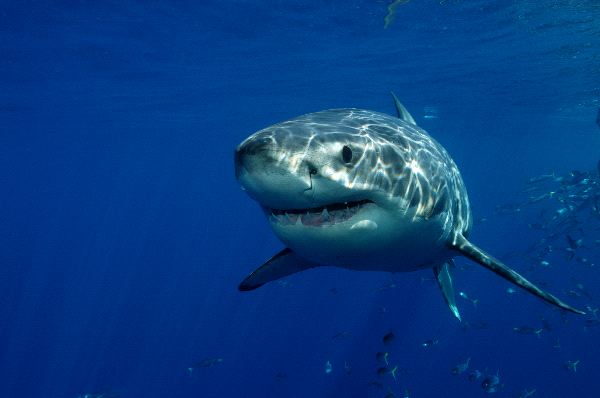 There is no denying the predatory nature of the Great White Shark. In fact, to is believed to be one of the most aggressive predators in the world. They consume a variety of types of food sources including seabirds, fish, and various sized marine life animals. They are known to lift their heads out of the water from time to time. It is believed by experts that this is a way for them to survey the area for their prey.

These sharks are very opportunistic when it comes to eating. They will consume just about anything that they can find. They have also been reported to try to consume other sharks and even other types of debris that is too large for them to properly digest it.

For the Great White Shark, reproduction doesn’t occur until around 15 years of age. However, due to their aggressiveness there is little more known about their mating rituals. While there has been the ability to examine females that are pregnant, there has never been any birth of the young recorded or witnessed.  It is believed the gestation period is about 11 months and that the pups are born in the late spring or early summer. The average lifespan for this particular species of shark is 30 years.