The Great Blue Heron is a very large bird, the largest of all Heron in North America. They can range in length from 38 to 54 inches. Their wing span can range from 66 to 79 inches wide. They have an overall weight of about 5.5 pounds.

This particular bird is often found along the shore of wetland areas. They are located in both Central America and North America. Their range is also part of the Galapagos Islands and into the West Indies. There have been some spottings of them in England and the Caribbean.

They are often heard making various croaking sounds. They can use them to communicate such as calling for a mate, defending territory, and even out of curiosity to see what is going on in their habitat.

They create their nests in trees that are very tall. This allows them to be able to offer safety for their offspring from various predators. They tend to live inland when they are going to be mating and creating nests for their young to be raised in. They may return to the same locations annually for their mating and raising of the young to occur. 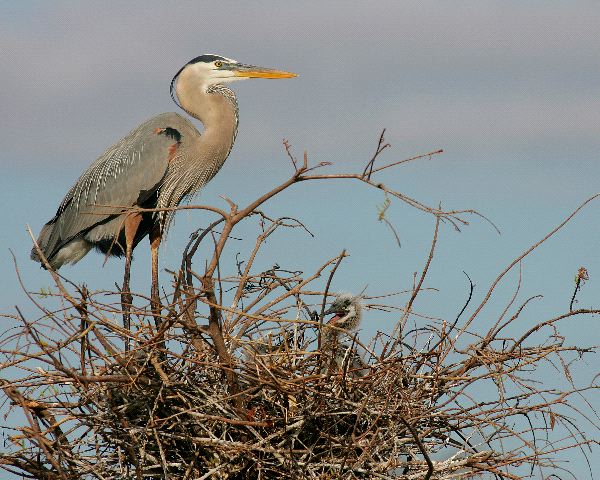 There are plenty of food choices for the Great Blue Heron but the majority of their diet consists of small fish. They also consume shrimp and crabs. They may dine on rodents, amphibians, and small reptiles. They have excellent vision that allows them to find their prey. They move very quickly so they often have the element of surprise on their side when it comes to getting their prey successfully.

They swallow their food whole so they need to only consume what they can handle. However, a common problem with the Great Blue Heron is that it can be very greedy when it comes to food. Many of them have died due to choking on prey that was simply too large for them to swallow.

The Great Blue Heron tend to create large colonies for breeding purposes. They create them along the marsh areas of bodies of water. These colonies can also include other species of Heron. They can create up to 500 nests per colony. After a pair mates they will create a nest together.

The female will lay up to 6 eggs in that nest; they are going to be pale blue in color. The pair take turns with incubating the young until they emerge. This is usually about 28 days after mating. If the temperatures are high though it can be as soon as 27 days. If the eggs are destroyed by nature or taken by predators early on the couple can often mate again and create another clutch.

Then they take turns caring for them and going to find food that that can bring back to the offspring. There is a hierarchy that quickly develops among the young. Those that are larger and stronger are able to fight for the food that the parents bring back. When there is a large number of them several of the younger, weaker ones will be pushed out of the nest or they will die of starvation. 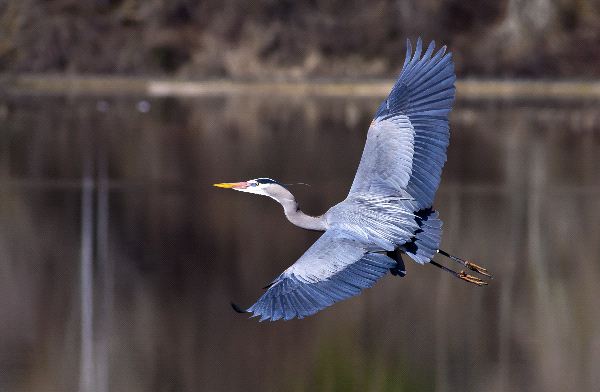