The Golden Lion Tamarin can usually be found closer to coastal forests on the Atlantic Ocean.  Mostly, these small New World monkeys can be found deep within the Brazilian forests.  Native to the forests of Brazil, these small monkeys have become endangered species with the population still left untouched in the wild, to be only 1500.  This seem might a large number but 1500 is a very, very small number compared to the numbers there used to be.

The Golden Lion Tamarin can be found within three different locations in Brazil, mostly in the South-eastern parts along the coast.  However, in captive, these little monkeys have numbers of almost 500, at last count, it was 490.  These stretch across over a hundred zoos globally so there is an opportunity to help with a new breeding program to help these endangered animals.

The Golden Lion Tamarin monkeys are very beautiful.  Their silky golden manes allow them to be very distinctive; because they do have this very orange, reddish mane surrounding their faces and ear.  Their hair is longer than what other species of monkeys will have but their hair allows these creatures to be easily identified.  However, the Tamarin’s face is completely dark and doesn’t have any hair whatsoever here.

Due to their striking manes, the Tamarin gets the title of Golden Lion because in a way they do resemble a lion with their thick manes.  However, there are very common differences.  The New World monkeys usually get their hair colour directly from the sunlight they receive daily as well as the endless carotenoids contained within their foods.

The Tamarin’s forepaws and tail can be completely black or brown; and have long claw like nails. When they move, the Tamarin can be squirrel like than primate like.

Males can be a little bigger than female Tamarin; usually the monkeys can grow anywhere between eight inches to thirteen and this doesn’t include it tail which is quite long also.  Usually they will weigh a good 600 grams or more. 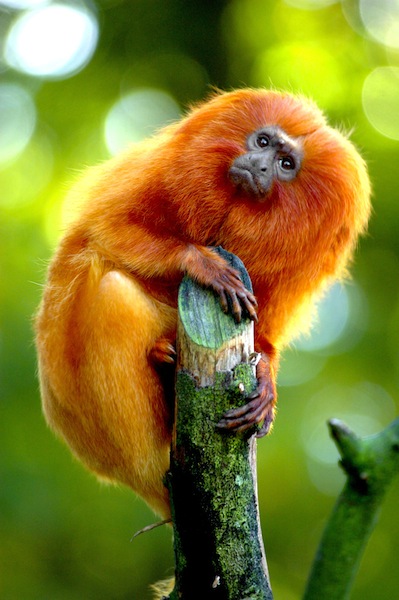 The Golden Lion Tamarin did have a huge habitat at one time, but, as time has progressed, almost 5% of their homes have been lost.  This has caused a rapid decline in the numbers of Tamarin.  However, these monkeys can be found in three prime locations.

First of all, there is the Fazenda Uniao Biological Reserve and the Poco das Antas Biological Reserve but there is also a private land reserve for the monkeys which is homed with the Reintroduction Program. There is said to be a small number of Tamarin monkeys left in the wild, but there are a few hundred animals homed in zoos.

Though, the Tamarin’s do love to live in swamp and hilltop forests, as long as they are 300 meters above sea level, the Tamarin’s can set up home. The Tamarin’s are also able to adapt to their surroundings. They are able to live in degraded forests with a large fruit supply all year long; and love to sleep in tree holes at night.  This is to help predators from reaching them and to gain heat during the night.

The Tamarin’s behaviour can become a little chaotic at times.  Most of the time, a group of six -eight can live together peacefully.  They can share food, create good, strong social bonds with one another and the group will be active for up to twelve hours each day.  However, the group often moves around a lot to prevent any scent being left behind reducing the risk of predators hunting them.  They do use long calls to communicate with one another also. 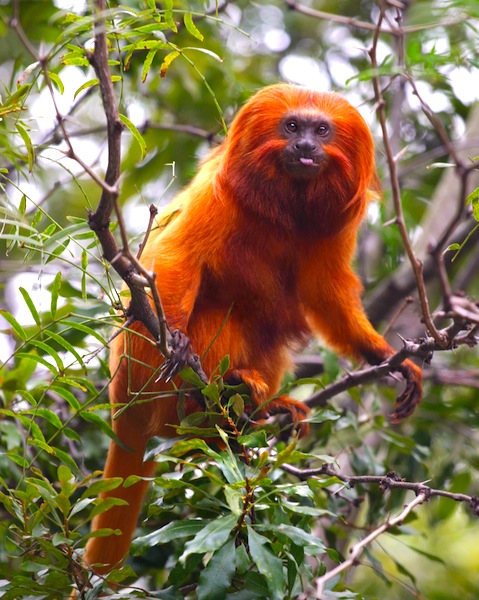 A golden marmoset in branches

The Golden Lion Tamarin’s use their long fingers to catch things such as;

Their feeding patterns range considerably because they can forge for almost any creature that is small enough and slow enough to catch.

Tamarin groups usually will have only one male which will mate with all females.  Usually the mating season will occur from March until the middle of June and the birthing months come between September through to February.  Most females mature quicker than males, than it is only when females are 30 months old when they can reproduce their own young.