There is nothing quite like the look of the Goblin Shark. The fact that they live where you often can’t see them has made them a mystery that many people and even experts are curious about. Even with advanced technology, there is still a great deal more research that has to be done in order for us to fully understand what they are all about.

A full grown Goblin Shark will be from 8 feet to 12 feet in length, with females usually being larger than the males. They average in weight is 450 pounds and their location and food sources play a role in overall size. The body is semi fusiform and allows them to reduce the use of energy in the water.

One of the significant differences between them and other species of sharks is the appearance of their fins. They aren’t pointed but instead they are round and they are lower on the body. They also have pelvic fins that are quite a bit larger than their dorsal fins. The tail features an upper lobe that is longer than what you will see on any other species of shark. The tail doesn’t have the common ventral lobe either.

The Goblin Shark features a snout that is short and flat. Many people have dubbed it the ugliest looking of all sharks due to that design of the snout. The flatness of it is also wide and contains many rows of teeth that are long and smooth with the exception of the back teeth. Those are designed for crushing food sources.

The pinkish color of this species of shark is very interesting. The experts believe that this has to do with the blood vessels that are under the skin that is easily going to bruise. The fins are blue colored because they don’t have a nictitating membrane. About ¼ of the weight of this shark is the liver and that helps them to conserve energy and to be buoyant.

The Goblin Shark is mainly found towards the bottom of the water so it is hard to find it and to observe it. The majority of them have been sighted around Japan, mainly the areas of Boso Peninsula and Tosa Bay. They do have a wide range and seem to migrate for food and for mating purposes. They have also been spotted around the waters of South Africa, New Zealand, and Australia.

They have been noted to be living in the Atlantic Ocean with sightings around French Guiana, the Bay of Biscay, and around Portugal. In the past decade they have also been found living around the Gulf of Mexico. It is believed that environmental issues have created the need for movement if they are going to survive in some areas.

This is one species of shark that is in danger of very low numbers. However, due to their vast distribution it is hard to get a good grasp on the number of hem that remain. Still, there are main conservation efforts out there including around Japan to try to increase their distribution and improve the genetic pool. 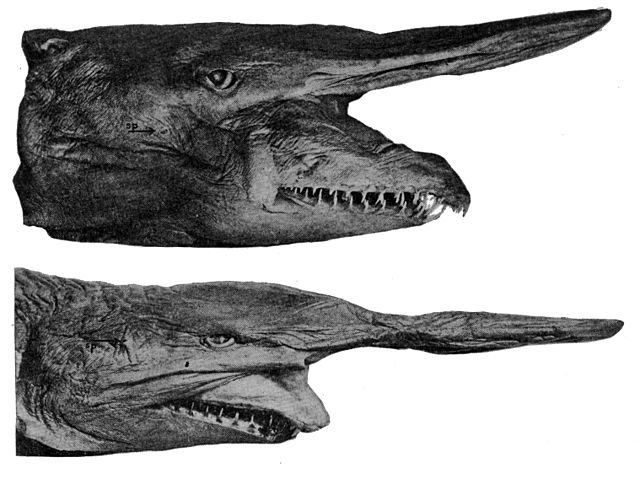 These sharks tend to be loners and they are also very curious about their environment. They tend to get into locations where they shouldn’t including various crevices or too close to boats because of that curiosity. They are able to use receptors in the snout to help them identify electro currents in the water as well as vibrations of movements around them.

The Goblin Shark uses the ability to sense prey with electro sensitive organs of the snout when they aren’t able to see well in the depth of the water where they live. When they do find prey, they will use a tongue like muscle that comes out of the jaw to suck it into their front teeth which are very sharp. They feed on crustaceans, cephalopods, and deep sea rockfish.

This species of shark is able to keep its body perfectly still and that helps it have the element of surprise in the darkness of the water. This is one way that they can get the volume of food they need but still conserve their energy.

There is virtually no information about the reproduction habits of the Goblin Shark. There has never been any female that was pregnant found or captured. It is believed that that are ovoviviparous and that their eggs hatch in the body of the mother and then she gives live birth to them. As far as their mating rituals, age of maturity, and gestation period though there is no solid information for experts to go on.

They are hopeful that as technology improves over time, they will be able to gather more information on these fascinating and elusive species of sharks.