The Gila Monster is one species of Lizard that people are afraid of. It has a terrible reputation and the fact that it is one of two that can offer venom it isn’t one that you want to be found too close to. People continue to keep them as pets illegally though because they like the idea of owning something so original.

This Lizard features a very stout body and they range in length up to 2 feet. They may be a variety of different colors depending on where they live. Some of them have shades of yellow, pink, orange, and black on them. They are covered with various designs too that include stripes and bars. The light and dark areas contrast and give the strong impression that the body is made up of several segments that blend from one into the next all down the body from head to tail. The tail of the Gila Monster is very thick and long.

There is plenty of information to suggest that Lizards have been on Earth for at least 200 million years. They have been able to survive the times when dinosaurs died but they didn’t. Was the Gila Monster a much larger Lizard during that period of time? That is one of the common theorize. Then they got smaller so that they would be able to survive on less food.

It is hard to determine where all of the branches of the Lizard species really come from. Since there are over 3,800 species of Lizards a great deal has taken place over the course of time. One thing that we do know is that the Gila Monster is highly adaptable and that has been part of its evolution process.

A slow pace is what the Gila Monster has to offer. They are aggressive by nature though and that is why they live in isolation. They don’t have the same level of vision as many other types of Lizards. Many researchers believe that this lack of sight is part of why this Lizard can be so willing to attack. They don’t want to take a risk that something in their environment isn’t safe for them to be around.

There are times when the Gila Monster has bitten humans. However, there is no evidence that they go hunting for them or that they take small children to eat as a meal. These could be big part of the legends that continue to circulate in the various cultures out there. A bite from one of them though can make a human very sick due to the bacteria found in their mouth. The venom can make a person ill too so always seek help from a doctor if you get bit or injected as soon as you can. 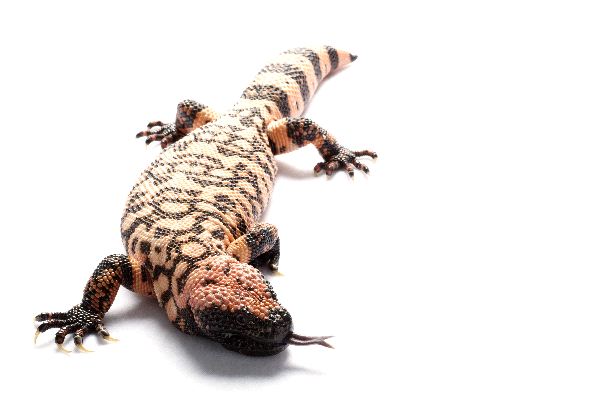 The warmer and the dryer the location happens to be the more the Gila Monster is able to thrive there. They do very well in harsh environments that other living things won’t do well in at all. They tend to enjoy areas where there is lots of gravel and sand. Areas that have some large rocks are common for them. It is also a characteristic of this Lizard to burrow under the ground.

You may have a hard time seeing them during the day as they are very active in the evening hours. However, don’t rule them out as being available in the daylight as they have a very unpredictable schedule. This is especially true during mating season and when there is very little food available.

There are many places in the USA where the Gila Monster is known to reside. These areas include sections of Arizona, New Mexico, California, Utah, and Nevada. They have also been found in areas of Mexico. They love the desert areas and so several of them are also living in the Mojave, Chihuahuan, and Sonoran Desert areas.

There are a variety of different types of food that this species of Lizard consumes. They include birds, eggs, and a variety of small mammals. They will eat what they can when they can in an effort to store up fat for when it is harder to get food. The Gila Monster tends to do most of its hunting under the cover of darkness.

Since they move very slowly they have to rely on being able to surprise their prey. Once they get a hold of them they have a bite that makes it very hard for prey to escape. They are then able to inject enough venom to immobilize their prey. This allows them to consume it while it is still alive but it is frozen and can’t run away.

For the Gila Monster mating takes place during the summer when they have the most food. They live alone with the exception of when they are looking for a mate. Both the males and the females are going to be looking for each other. The females tend to not mind each other but the males will fiercely fight when they come into contact with each other.

After mating has occurred the male may linger for a small bit of time. This will annoy the female though and she will run him off. His next plan of action will be to find another female that he could have the opportunity to mate with. The female will be looking for a place where she can create a burrow or she will take over one that has been abandoned by other creatures.

It that burrow she will place her eggs – up to five of them. The hope is that they will stay hidden and warm long enough for them to hatch in the fall. The eggs are left completely alone as she won’t be coming to help them in any way. She has no maternal role other than leaving the eggs in a safe location. The young have the ability to care for themselves once they come out of the shells. 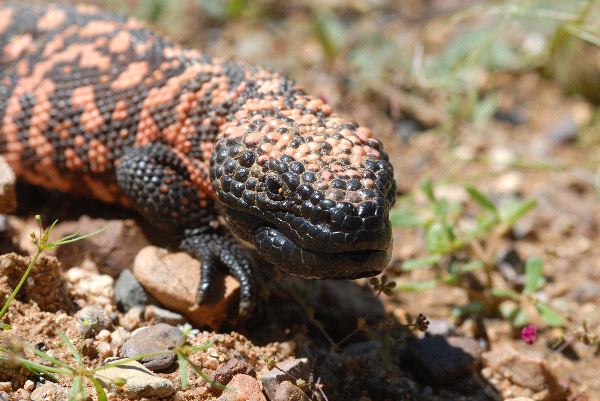 The smaller the Gila Monster is the bigger risk there is of predators reaching them. Some of the known predators include birds, and coyotes. However, since they stay in burrows for a long time they also have a chance to survive. Coyotes though may get into those areas and find them.

Humans are the biggest threat to the Gila Monster. Many people will hunt them due to the fact that they are afraid of this species of Lizard. Others hunt them simply to have the opportunity to kill something so unique and that not everyone else has had the chance to hunt. The use of the meat and the skin of this Lizard is also very common. In some cultures the consumption of the young eggs is considered to be a delicacy.