Gibbons are large apes of the Hylobatidae family. There are four different genera of the gibbon ape: Hoolock, Symphalangus, Nomascus and Hylobates; though there was one species of the gibbon genus that is extinct and that is the Bunopithecus sericus.  Though, when it comes to the gibbons, most people consider them to be ‘lesser’ apes.  However, they are going to differ from other types of primates such as orang-utans, chimpanzees and gorillas because they are quite small, smaller than these other primates.

However, when it comes to the gibbons, they are going to be quite unique with different aspects.  Their wrists are actually made up from a ball and a socket joint which allows them for easier movements. What this actually means, is that the gibbons are going to have more reduced energy that is needed with their torso and arms. This helps to stop putting stress on to the joints in the shoulder and put less pressure clefts on the arms and shoulders also.

There are times when the gibbon’s wrists can dislocate themselves; this can happen when they are swinging their hands from side to side. This might sound strange but they will repair themselves once they stop swinging their arms around.  Though, the gibbons do have longer feet and hands than many other primates. The gibbons will have clefts, deep clefts on their hands with this being between their 1st and 2nd digits.

The fur they will have will be grey, brown or black in colour and at times, they can have some white markings around their face, hands and feet.  When it comes to the males, they will have darker patches near their white fur which shows the females that they are ready to mate.  Though, the gibbons can have larger throats; this is used for calls but it can inflate.  However, the teeth and skull of the gibbons, closely resemble an ape and their noses are similar other primates.

Their hands are very strong; and are hook shaped which are used for grabbing onto branches and their arms are rather long also.  Their legs are also very long and powerful which are used to help propel the primates from place to place. However, they do get a really great range of motion with their elongated arms and legs.  They don’t have any tails however but their long coats help to make them look distinctive. The gibbons can weight almost 29 pounds also.

The Habitat of Gibbons

These amazing gibbons are mostly found in south Asia such as Indonesia, Borneo, Java, China and India.  They can freely adapt to live in the trees but strangely they do not often go to ground.  Most do not like going to the ground if they don’t have to; though the forests and tropical evergreen forests are going to be areas in which the gibbons can be found.

The Behavior of Gibbons

The gibbons swing from tree to tree which is called brachiating because it is so fast and unique.  They will be able to move almost at 35 miles an hour through the trees and forest areas which is amazing. They will even be able to reach between gaps of almost 50 feet with just one swing and leap!  This allows the gibbons to be able to reach fruits from branches. There isn’t really a lot of competition when it comes to food however.

Though, the gibbon is a very social animal. They will be of course very territorial and will strongly defend all of their homes; they do this by sounding warning calls to any immediate danger as well as visual displays.  With their calls, they can be heard in long distances – usually about one kilometre and this happens with a couple – usually a female and male who have mated.

Some females and males will use their singing to try to attract a mate. They will sing solos to one another in order to try attract the tension of another they wish to mate with.  Though, there is a downside with their calls, it can help to attract poachers that may be in the area so they do have to be very careful when they are singing near human population. Many poachers will capture or kill these animals for the use of traditional medicines.

Though, what has to stand out amongst these animals has to be their ball and socket joints because it is this, which allows them to bring up a tremendous amount of speed and accuracy.  This makes these very unique because very few other primates can match their speeds; though the gibbon can often fracture their bones when they swing from tree to tree frequently. 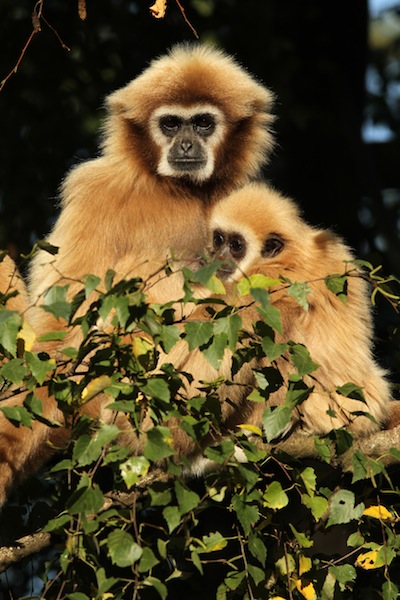 Gibbon with baby in a tree

What Do Gibbons Eat?

The gibbon loves fruits and can often be found near fruit trees lurking intently!  Though, they do like figs and leaves and sometimes insects which will make up a very important diet for these animals.  Most of the times, it will be fruit that the gibbons will eat but they do like to mix things around with adding insects and some vegetable material to their diets.  Mostly, the gibbons like ripe and pulp fruits so in effect, it is only going to be animals such as birds and squirrels which they are going to be in competition with when it comes to their food supplies.

Gibbons have been known to eat some small eggs and vertebrates when food sources have dried up – this is only very occasionally.  Most of the time, it is going to be fruits and leaves that they will eat.  Though, they can spend most of the day feeding; this is a fairly big part of their day while the rest of the day is spent foraging.  For Gibbons found in China, they will eat mostly leaves and fruit.

How Do Gibbons Mate and Give Birth

Most of the gibbons will live in groups – family groups so there will be a male and female adult group which is the parents and their children. They will have their own territory; and many of the families will sing together when they defend their home. Though, for the Hoolock gibbons, they are going to mate throughout the year but will only give birth to one child.  There is a rarity with twins but this can be once every few years.

Most births will come from November through until the month of March; and the young infants will be weaned after two years of so. Though, these animals do not reach their maturity until they are 8 or 9 which is quite late for some primates.  However, this is for gibbons found in the wild; for those in captivity, they can reach maturity at ages of 5, 6 or 9 years so it can vary.