The Panda Bear certainly is very different in appearance than the other species of bears. It features both black and white on the body. The head is white with black around the eyes. The limbs are black as is the band around the back of the neck that extends from both of the front limbs. The back and the stomach of them are white in color, while the ears are black.

Giant Pandas do not portray the same image of a mean bear as the larger species often do. The males are slightly bigger than the females. A full grown Panda Bear will be about 170 pounds in females and 350 pounds in males and from 4 to 6 feet long.

Just like all bears, this one has a very large head. However, the Panda Bear has a very round look to it. As they mature they often get more round in appearance. This is due to the development of the powerful jaws that are used for eating. The Giant Panda has large molar teeth and strong jaw muscles to help them crushing tough bamboo that makes up almost all of their diet.

Their coat is very thick which helps them to keep their body temperature regulated. Unless you look at one very close you won’t know that their paw has a kind of thumb and five fingers. The purpose of them is the same as opposable thumbs for humans and for apes. They will mainly use them to hold bamboo and get to the shoots inside.
Unlike other bear species, the pandas do not have heel pads on their hind feet.

Many people are quite interested in the evolution of the Panda Bear. How did they become so different from other types of bears? For years the taxonomic classification of the Giant Pandas was under debate, until DNA testing confirmed it, there were many that didn’t even believe this was actually a type of bear and part of the Ursidae family.

Some research indicates that Pandas has evolved for more than 3 million years as a separate evolutionary line than that of other bear species.

It is also believed that due to shortages of food they became dependent almost completely on the bamboo and plant life. They weren’t able to find enough animals to thrive on. The movement into trees could account for a survival instinct. Since Panda Bears can’t move fast they could become prey for other animals if they remain on the ground.

There are many stories and legends of the Panda Bear in the Chinese history. It was regarded as having magic powers. Many writings indicate that it helped to keep bad spirits away. The various Emperors of China also had them as pets.

In a zoo setting Panda Bears are generally in pairs. However, in the wild they tend to spend their time alone. The exception is when the females are caring for their young. They aren’t very territorial though so they are tolerant of each other eating in the same areas. They can often be boring to watch though as they mainly eat and sleep for most of the day and night.

Giant Pandas do not hibernate and do not establish permanent dens. They take shelter in trees and caves. 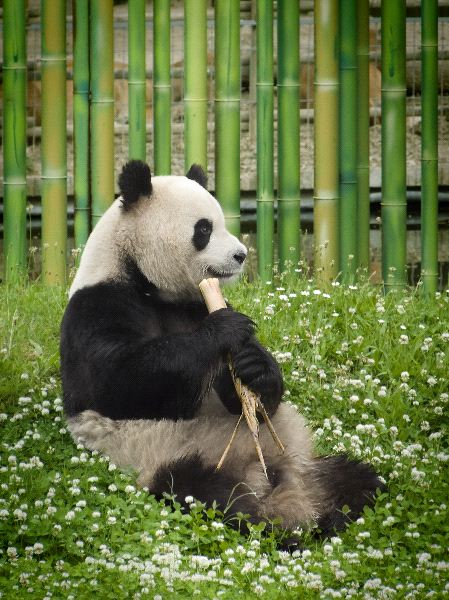 Small patches of mountain regions of central China are the places where Panda Bears reside. The Minshan Mountains and the Qinling Mountains in China are the home for nearly the 65% of the wild population.

They live in temperate montane forests where bamboo stands are present. They can be found in the elevations from 4,000 to 11,000 feet. Through careful observations six different areas where they are known to live in the forests of China have been identified.

They will change the elevation of where they happen to reside based on the growth season of the bamboo. They are able to determine when it will be at its best in a given area. This type of movement in their habitat also prevents them from completely depleting that resource from any given area. Evidence of where these bears were once living in the trees has been found throughout those six regions of China.

While Giant Pandas are classified as carnivores, their main source of food is bamboo, up to 99%. Many people assume that bamboo shoots are the only types of food that these bears eat. They also consume stems, leaves and in rare occasions small mammals. Panda bears can spend up to 10 to 12 hours a day feeding.

The amount of bamboo that these bears can consume per day is unbelievable. In all, they can eat from 20 to 30 pounds of bamboo every day, due to the fact that bamboo has a very little nutritional value.

The bamboo is often left for them because other types of animals can’t chew through it. Bamboo has splinters that can get into the throat and be very uncomfortable. However, the Panda Bear has a thick esophagus that allows them to swallow it without any problems.

Reproduction is a very serious concern when it comes to the Panda Bears. Although they are able to mate at a very early age, most of them don’t seem to have any interest in it until much later. Even when they do mate there isn’t always the success of offspring creation.

Later research shows that this behavior occurs only at captivity as wild Pandas have reproductive rates comparable to other bear species.

The males will fight with each other for the right to mate with females in the area. It is common for the males to mate with several females during a given season. This spans from the months of March through May. The pair may spend 2 to 4 days with each other before going their own ways.

The offspring will be born from 95 to 160 days later. Usually only one cub is born at a time but twins are possible. The reproductive rate is about 1 young every 2 years.

Panda cubs will spend about 18-24 months with their mother in the wild before they go out on their own. Generally they will take up residence within a close proximity of their mother as long as enough food is available.

Panda Bear moms can be stressed out when it comes to caring for their young. Part of the efforts to increase their numbers has to do with artificial means of conception. They also include the young being cared for by humans when the natural mother isn’t able to do so. In the wild Pandas can live to be about 14 to 20 years of age and 30 years old in captivity. 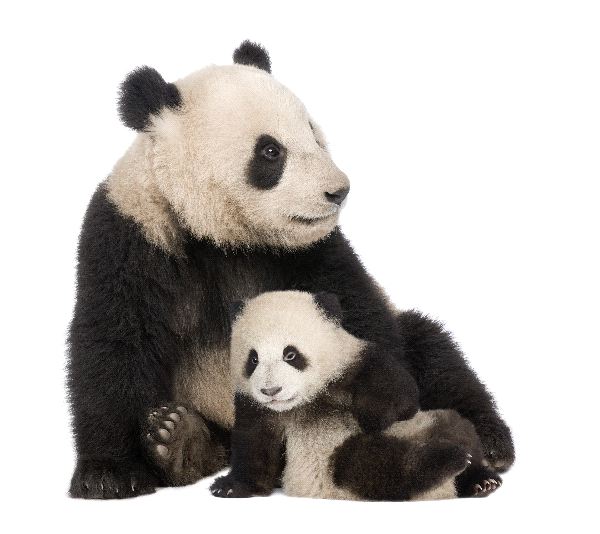 With only about 1,600 Pandas remaining in the wild, you would think that hunters would leave them alone. However, the low numbers often fuels their desire to kill them or capture them.

Even though this type of hunting is illegal in China it continues to take place. There are instances where poachers have been given the death penalty though for killing Panda Bears. Those types of penalties can only be implemented though if the people responsible for the actions are actually caught. The Panda bear is one of the most endangered animals on the planet.