The Giant Anteater is a very unique looking creature, and it is the largest of all Anteaters in the world. It is one creature that doesn’t get confused with any others due to the way it looks!

The Giant Anteater walks with a very peculiar type of gait. This is due to the fact that they walk on their knuckles. They have a tongue that may grow up to 2 feet in length but it is very slender.

Each foot of the Giant Anteater offers 5 digits. On the middle one for each foot there is a very long claw. This is very strong and they use it as a tool to help them break open termite and ant mounds. They also use this claw to protect them from various types of predators.

Both South America and Central America are home to the Giant Anteater. They are high in numbers around Argentina and Honduras. Even though they aren’t found living in Mexico today there are plenty of fossils that have been discovered there. It isn’t known what occurred that caused them to die out in that particular area.

The Giant Anteater is able to adapt to a variety of different environments. They are able to live in grassland areas, the rainforest, and deciduous forest locations.

The Giant Anteater is very solitary and it does well taking care of its own needs. It will usually only interact with others during mating and when there are young to care for. They are able to search for and then to tear into the mounds of termites and ants.

Their long, slender tongue allows them to gather lots of the food at once time. They have a sticky substance on their tongue that causes the prey to stick to it for each consumption. They don’t have very good vision or hearing.

There is plenty of sounds that come from the Giant Anteater that they use for communication. It is typically observed when mating is taking place or when the mothers communicate with their young. They may offer hissing, snorting, roaring, and sniffing to communicate a variety of messages. Experts still aren’t quite certain how to decipher all that they have witnessed in this particular area.

The Giant Anteater spends a great deal of its time eating every single day. As you can tell from the name, they consume large amounts of ants. They also consume termites.

There isn’t much information known about the mating rituals for the Giant Anteater. It is believed that maturity can occur from 2 ½ to 4 years of age. It is believed that sometimes breeding is seasonal but then in other locations it can occur any time of the year. Some experts believe that when there is plenty of habitat and food that allows them to mate more frequently.

The gestation period is about 190 days and then a single offspring will be produced. The young will be well cared for and bond with the mother. They often stay with her until she is ready to give birth again. The first part of the life of the young is often spent on the back of the mother while she is feeding.

The Giant Anteater is listed as Vulnerable in status due to the destruction of their habitat. It is estimated that the population have a reduction of 20% in the next decade. The goal is to slow that decline so that they don’t get into a very serious number drop in regards to their overall population. 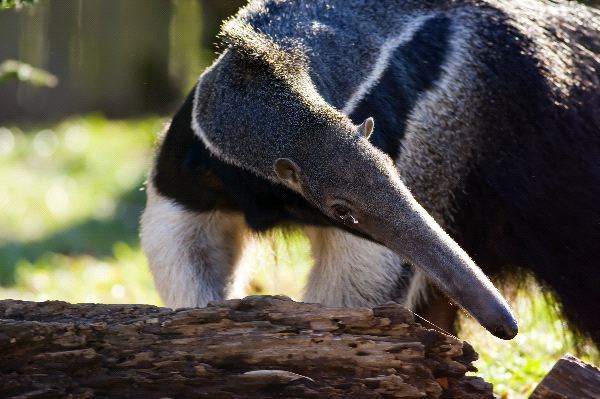