The Gentoo Penguin is closely related to both the Chinstrap Penguin and the Adelie Penguin. It was first identified by Johann Reinhold Forester, a scientist, in 1781.

One of the distinctions of the Gentoo Penguin is that it has a longer tail than most species. This tail sticks out as they move and it sweeps from side to side. This species features a white stripe from that is very wide across the top of the head. It also features a bright color bill that is orange and red. They feature feet that are very fat and that are webbed. They are orange in color and they feature long claws on them that are black.

This allows them to be able to do well on the slippery ice and also to climb in the rocky terrain. They walk with a side to side gait that is quite comical. They tend to move slowly on land. They are also seen sliding on their bellies in areas where there is lots of ice that they have to move across. This helps them to move while exerting less energy.

They chicks have gray coloring on their backs and a white front. Adults range in height from 20 to 36 inches tall. They are ranked as the #3 largest species of all 17 species of penguins. They weigh from 10 to 19 pounds with the males being taller and heavier than the females. Both may drop a considerable amount of weight though during molting. They are able to see very well in the water but their vision isn’t the best on land.

Falkland Islands is the main location where these penguins are found. They have been able to adapt to conditions that are very cold and very harsh. They live around the sub Antarctic Island and the Antarctic Peninsula. This is also where they take part in mating. They are found around Kerugulen and Staten Islands. They have been found around South Sandwich Island and South Orkney too. It isn’t really known where all they will go when they aren’t breeding. They have been found is some far away locations though including Argentina, Australia, and New Zealand. 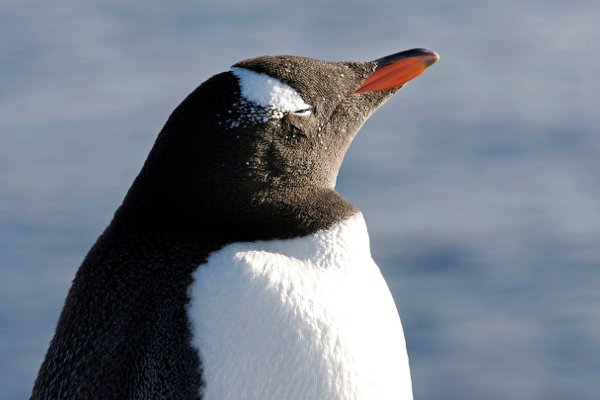 They are very vocal, and use a variety of different sounds to communicate with their mate and young, to warn of dangers, and even to protect their territory when necessary. They are well known for the very loud trumpeting sounds that they offer. They will throw the head all the way back to release this particular sound.

While all species of penguins are good at swimming, The Gentoo Penguin is the fastest underwater swimming of all species. They have feathers that are very fine and that cover the entire body. They must take part in preening more often than other species of penguins due to that fact. The process of preening involves using the bill to get oil from a gland by the tail. Then they will twist and turn their body in various ways to be able to distribute that oil all over the feathers.

Territory is more of a concern with the Gentoo Penguins than most other species. This is due to the fact that they tend to spend most of the year living in the same location where they breed. The big exception is when they need to move to ice free locations during parts of the winter. Fighting over nesting areas is typically going to involve males.

Food is found by the Gentoo Penguins around the inshore waters. They tend to stay close to the shore when they can to find food. When they are struggling to find enough food, they will venture out further and take part in diving. They can dive up to 70 meters. Most of the time they are under the water for food for a period of 2 minutes or less. They will gorge on as much food as they can get in the 2 months before molting.

The process of molting last about 25 days for this species of penguin. During that period of time, the old feathers are pushed out by the new feathers. They aren’t able to go into the water to feed during this period of time. As a result, they need to store up as much fat as they can to survive that time. Approximately 15% of the diet for them is fish. The rest of it is crustaceans and krill.

This species of penguins will return to the same location annually to mate. When possible, they will find their same mate year after use. A variety of calls that they use vocally help them to identify each other. The young also know the distinct calls of their own set of parents. For those new to mating, the males will find a place for the nest to be placed. They will also call out to available females.

When a female shows interest, there can be a couple of hours mimicking each other. This helps them to create a strong bond between them. They will work as a team to create their nests. They tend to look for flat ground for mating. This is going to be very close to the coast. They will sometimes create nests in vegetation locations but most of the time they will be looking for rocky regions. They use small pebbles to be able to create their nests.

There is a high mortality rate for the chicks. The average life span of the Gentoo Penguin is from 10 to 13 years.