The third smallest species of penguin in the world is the Galapagos Penguin. They are well known and loved due to their appearance. The smaller size of them and their side to side movements make them adorable and people can’t seem to get enough of them. They also do well in captivity so they are a common penguin seen at zoo exhibits.

The body of this penguin is designed to enable it to live in locations that are cooler both in overall temperatures and cooler water temperatures. This is one of the banded species of penguins. They range in height from 16 to 19 inches tall, and they average about 5  ½ pounds so they are a small penguin. The females are just a bit smaller than the males.

The head is black and it features a white border that goes behind the eye and around the ears then down to the chin on both sides where it will join at the throat. The Galapagos Penguin feature two black bands across the lower flanks and the breast. The bill is black and it also features a yellow color on it. The bill is very long and thin. They have very short legs and they do tend to look awkward in their land movements.

However, the design of the body serves them very well when it comes to being quite agile in the water. They are to move quickly and without exerting a great deal of energy. Their feathers offer them two layers of insulation so that they are able to stay warm in the water and at night on land.

The Galapagos Penguin is native to the Galapagos Islands. This is the only species of penguin that live North of the equator that isn’t in a captive setting. They are found in the Fernandina Island and west of Isabela Island.

During the day, the Galapagos Penguins stay in the Archipelago. They go to land at night and spend a great deal of the day time hours in the water. They do their feeding during the day. They do create large colonies, and they are often found huddling close to each other at night on land. This helps them to secure their need for social interaction. At the same time, it helps them with keeping their body temperature regulated. During the day, the strong sunlight can be harsh on them so they will go into the water to escape it.

To help them balance on land, they often waddle with their wings stretched out. They also put their wings out when they are hot as a means of helping their body to cool back down as they make their way towards the water. Vocalization is a huge part of the social activities for these penguins. Preening occurs to help them be able to get the oil from the gland by the tail that they spread to all of their feathers. This is very important so that the feathers are able to successfully offer them the level of protection that they need. 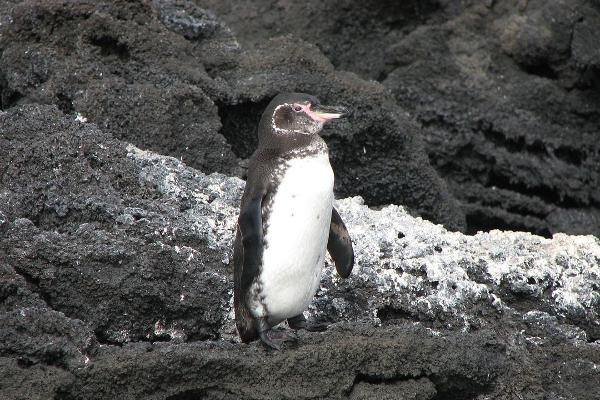 The Galapagos Penguin tends to find most of its food around the shore. They seem to be able to find enough all year long so that isn’t a problem for them. They do need to eat abundantly at times so that they have fat stored up. This is what they live on during molting and mating so that they don’t have to return to the water to feed.

Small fish and crustaceans make up almost all of their diet. Group hunting is often part of their experiences to help them round of schools of fish. They also use this hunting in groups as a means of deterring possible predators.

For the Galapagos Penguin, once they find a mate that is who they will pair up with annually. They rely on their ability to identify the sounds of each other to find their partner in the colony. When younger penguins are ready to mate, the males will put on loud displays of calling and prancing to get the attention of a female. Once he does, she will decide if she is going to stick around or not. If she is interested, she will mimic his movements and this will continue for a period of time.

The nests are created in various cracks, crevices, and caves around the lava flow of the islands. They nest along sandy shores and rocky beach areas. They will often place their nests in hard to reach locations when possible to help secure the safety of the eggs. They also have to put them in a location where the sunlight won’t be too harsh on the eggs.

The males may fight over dominating the best spots for nesting. They are very territorial and that sometimes leads to fighting among the males. Most of the time the vocalizations between them are enough to make one of them back down. Due to the diminishing population, there isn’t as much of a conflict over nesting as there once was.

Once the nest has been created, the female will lay one or two eggs in it. The smaller of the two eggs is likely to produce a chick that won’t survive. The parents will take turns to incubate the eggs for a period of about 42 days. It will be several weeks before they molt and can go into the water to get their own food. Until then, the parents will take turns bringing food.

Mating can occur two or three times a year for these penguins. There are significant concerns about the future of the Galapagos Penguin. They have the smallest breeding range of all penguins. They also have the lowest population of individuals remaining. Efforts to help protect their habitat and to help increase survival rate of the young chicks are a part of trying to get those numbers to gradually increase.