Spending lots of time around water you will find the Galapagos Marine Iguana. It is one of the few species of Lizards that will forage around the sea and that is classified as a marine reptile. They are able to dive down up to 30 feet into the water to find food. They have a natural ability to swim and to move around with speed.

The body of this species of Lizard ranges from black to a light shade of gray. They may be thought of as different Lizard species when someone sees the different colors of them but they are all the same. The darker colors help them to be able to get more sunlight and that helps with their body temperature.

The body is covered with short spikes on the head and all down the back. This helps to deter various predators and even other types of Lizards. This gives them a mean look though which is ironic as they are very timid and shy for the most part. They have webbing between their toes that allow them to move around with ease in the water.

The males are longer than the females with a size of about 5 ½ feet. The females are about 2 feet shorter. In the water they are fast and graceful but movement on land is clumsy and takes lots of energy for the Galapagos Marine Iguana. You will notice that they have dorsal fins and a long tail.

These features of the body allow them to move in the water with little energy being expended. They use their sharp claws to help them when the current is heavy and when they need to get onto land.

If you want to stir up a heated debate among the experts, just talk about evolution in regards to the Galapagos Marine Iguana. There are many theories about what took place with it over the more than 200 million years that Lizards have been around. Did it once only belong in the water and then developed appendages to help it be able to survive on land too?

The flip side is that it was once a land only creature but then due to changes in the environment it was able to live most of the time in the water. Many experts believe this species of Lizard was very huge during the time of the dinosaurs. Then it developed dorsal fins so that it could survive in the water and that accounts for why they didn’t become extinct.

We simply don’t have enough information to know for sure. The early fossils of Lizards so show us that the branches we are familiar with today run very deep. However, that also makes it extremely difficult to find that core ancestor that all of them are related to. Perhaps the addition of new findings along with new technology will give us those answers in the future.

Since so much of the time of the life for a Galapagos Marine Iguana is spent in the water there is still a great deal that we don’t know about them. It is known that they have to come to land to help with regulating their temperature. The water is too cold for them to remain in it all the time.

When the body temperature drops too much they have a hard time moving and that makes them vulnerable to predators. They will become more aggressive too when they are cooler. They tend to spend time on rocks by the water with their head upwards to soak up as much sunlight as they can at once. 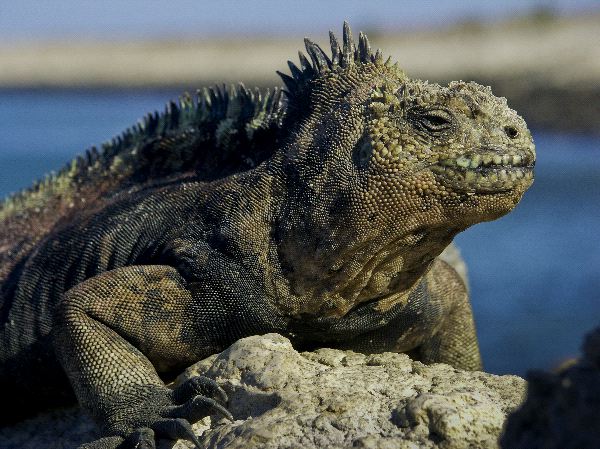 The only location where this species of Lizard is naturally found is the Galapagos Islands. They are found near the shoreline since they have to come to the land often in order to get sunlight to warm up their bodies. They may be found around areas of the marshes and the beaches too.

The Galapagos Marine Iguana has very different feeding habits than most Lizards. They tend to be content with the algae and the seaweed that is found around the water and the rocks. They do have sharp teeth and claws so many people assume that they are meat eaters. Instead they use those teeth and claws to successfully scrape the algae from the rocks.

The flat snout found on this species of Lizard makes it possible for them to get into cracks and crevices for the algae too. There is never any worry about them taking in too much saltwater. Their bodies naturally will expel it through various glands while they are eating.

The overall weight of this Lizard has about a 25% differential depending on the time of the year. They eat heavily in the spring and summer to store up fat for the fall and the winter. During that part of the year it is harder for them to find enough food. Seaweed and algae are always more plentiful when the temperatures are warmer.

Territory is very important concern for the Galapagos Marine Iguana. They don’t enjoy others being in their home range. They see it as a threat to their own survival. The males so allow the females to somewhat overlap as long as food is plentiful. This makes is possible for them to mate with those females. However, they aren’t going to allow other males to come along and steal that opportunity from them.

During mating the females will have stronger scents and that is what tells the males to make their advance. They will continue to look for other females once they have successfully mated with one. The female is on her own to find various types of materials she can use to create a safe nest.

The location where she will place her eggs has to be as secure as possible. Otherwise there is the risk that predators will consume them. At the same time she has to make sure that the eggs will stay warm enough or they won’t survive. Once she is happy with the nesting location and places her eggs into it she will be gone. The young will have to take care of all their own needs from the moment they arrive. 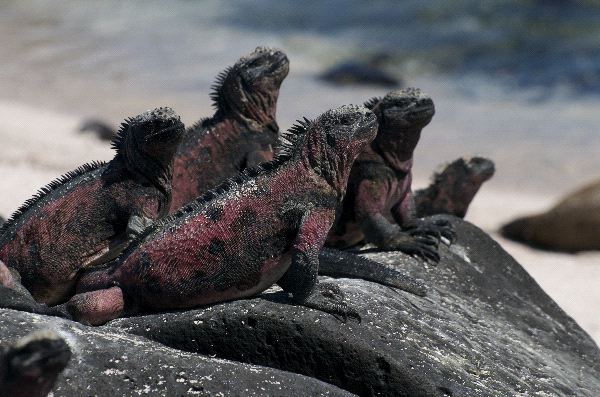 Due to the fact that humans now live so close to the Galapagos Marine Iguana they have to worry about problems with cats and dogs. They tend to really feel threatened by the presence of these Lizards and so they kill them. Very rarely do they consume them but they do leave them in various locations.

Sometimes humans kill them for sport but it isn’t as common as some of the other types of Lizards. They may want the thrill of hunting something that is unique and that not everyone is out there hunting.

The fact that they are in and out of the water creates concerns too. Sometimes they are tangled up in fishing nets and even plastic debris that humans leave along the beach. Boats in the shallow areas of the water have also caused tremendous injuries and even death to the Galapagos Marine Iguana.