The Fossa is often mistaken for a member of the cat family. However, it is actually part of the Mongoose family. Don’t worry if you thought otherwise though because it hasn’t been too long ago that even the experts had that same believe. They can be up to 3 feet in length including their long tail. They can weigh up to 26 pounds.

When you look at the Fossa you will quickly pick up on the resemblance to the cat family. It has a lean, long body with a very long tail. It is when you look cat their faces though that you will see the Mongoose resemblance. They have a longer face and a nose that seems more like that of a canine than anything else.  They also have ears that are rounded. They do have very sharp teeth and claws like the cat family. They are often reddish in color but they can also be brown.

Madagascar is home for the Fossa. They are found in a limited location around this region. It is the largest carnivore as well as the biggest predator in this location. They spend a great deal of their time in the trees but they do go to the ground frequently as well. They have a very versatile lifestyle and so they do what works well for them during any given time in their habitat.

The tail of the Fossa is a huge asset and they use it when they are in the trees to move very quickly. They are able to move so fast that it can be very hard to for researchers to get the data they are after with this animal. They can be active during the day or at night so their patterns of behavior in that respect can be hard to predict. They tend to be solitary animals unless they are mating or taking care of young. 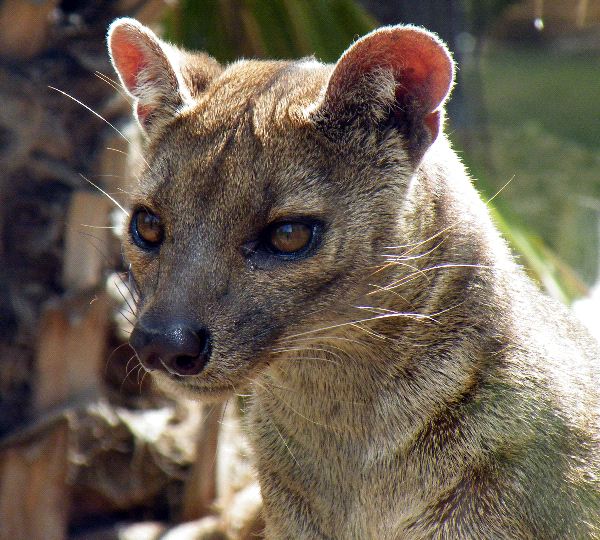 The diet for the Fossa is very diverse. They tend to enjoy consuming Lemurs though when they are able to find them. With more than 30 species of Lemurs living in this same region though they are often able to find them in the trees. They also consume Wild Pigs and rodents.

The Fossa is ready for mating around 4 years of age. The males have a large home range and they often have several females that will overlap with it. During mating season a female will give off a very strong scent that draws the male to her. After they mate they separate and he will go in search of other females to mate with. She will make sure she has a safe, secluded location for her young. They will be born in about 3 months.

A liter can yield from 2 to 4 young. The young are blind at birth and they have very little hair. They rely on milk from their mother’s body to feed them. In a few days they will open up their eyes. Then they will start to play and wrestle around with each other. About 4 weeks later they will emerge from the den. They will stay with their mother until they are about 1 year old.

The Fossa is considered an Vulnerable Species at this point in time. The loss of their habitat continues to be the top reason why they are struggling to survive. There doesn’t seem to be too much of an effort in this part of the world though to help their numbers and that is disappointing. 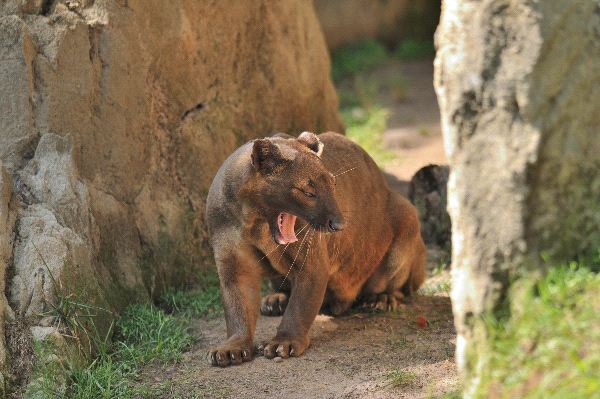