Flamingos are some of the most unique birds in the world. They stand out from other birds for their feeding habits, diverse habitats, bright colors and one-legged stance. There are six species of flamingo found in the Americas, the Caribbean, Africa, Europe and the Middle East.

The different species include the American or Caribbean Flamingo that is found in the Americas, the Bahamas and the Galapagos Islands. The Greater Flamingo is one of the most widespread of all flamingo species. It is also one of the largest of the flamingo. The Andean Flamingo and the Chilean Flamingo are found solely in South America. These birds are Least Concern in the IUCN– reports suggest that there are only about 30,000 Andean Flamingos left in the wild, while there is roughly 2 million of the Greater Flamingo. The Lesser Flamingo is the smaller flamingos found in all of the species. The James’s Flamingo is also a smaller, less widespread species of flamingo.

Flamingos are specifically referred to as wading birds. They are closely related to another aquatic bird called the grebe. Grebes can also be found in saltwater and freshwater like flamingos. Grebes are typically diving birds, though. Flamingos also share some common characteristics with penguins. Penguins and Flamingos both travel in flocks as to ensure the safety of the entire flock and food for all.

Flamingos face an imminent threat of extinction from predators like felines. Small flocks of flamingos that are smaller than a dozen birds tend to fail in the wild. Poaching is also a problem because people hunt flamingos for their colorful feathers. The tongue of the flamingo was once considered a delicacy and served to Roman Emperors.

Description Of The Flamingo

The flamingo is known for its bright pink or reddish color. Its color comes from food in their diet that includes a lot of bacteria and beta carotene, found in algae, plankton and shrimp. The brighter the pink of the flamingo, the healthier the bird is, although the actual color varies in each of the species of flamingo. For example, the Greater Flamingo is naturally a darker pink color than the Lesser Flamingo. Some Lesser Flamingos appear to be a whitish pink or almost peach color.

When flamingo babies hatch, they stay a white or grayish color for a couple years before they develop their mature red, orange or pink color. A flamingo’s lifespan in the wild is about 30 years, but flamingos have been observed living long life spans in captivity of 50 years of longer. The oldest flamingo is captivity is 77 years old. The flamingo is known for its long legs and its tall nature. Their height varies in each species of flamingos, but some can reach a maximum height of 5 ft. or 6 ft. Other flamingo species are, on average, only 3 ft. tall. 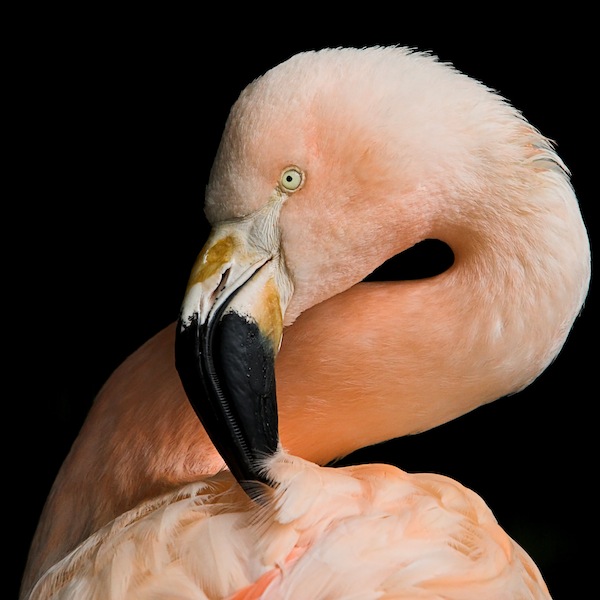 Flamingos are found in many countries around the world and therefore, a range of different climates and habitats. Some flamingos, like the Andean Flamingo for example, live in the high altitudes of the Andean Mountains. These birds sometimes have to migrate to warmer waters in the winter months. The typical, ideal location of flamingo feeding grounds are estuaries, mudflats, inland lakes, the shallow waters of tidal zones near the shores and even lagoons. The water must be shallow enough for the bird to feed. Flamingos do not always stay in the same place. A variety of factors can push flamingos to migrate. Flamingos can migrate because of a lack of resources, cold weather or to search for other waters. When the time comes for migration, flamingos usually prefer to travel at night.

The Diet Of The Flamingo

Like mentioned previously, the flamingo’s color comes from its diet of bacteria, algae, plankton, shrimp and crustaceans. Their bill is specially designed for the type of food that they eat. For example, the Lesser Flamingo has a deep-keeled bill that is ideal for the intake of algae and diatoms.  Flamingos are filter feeders meaning they use a variety of techniques to filter food from the water. They generally feed with their heads upside down in the water while moving their heads back and forth to collect food. Some dig their beaks deeper into the mud to get mud dwelling crustaceans.

A diverse diet among the different flamingo species is beneficial for the survival of all flamingos because if they all ate the same thing, there would be high competition for food and feeding grounds. The Greater Flamingo and Chilean Flamingo reside by inland lakes or estuaries where they can find an abundance of fish, but Andean Flamingo and Lesser Flamingos prefer areas without fish because the fish would prove to be competition for their preferred diet of algae and plankton.