Flamingos are unique birds in that they participate in synchronized mating rituals and they often are monogamous with their mate. Flamingos and their mates share a lot of the tasks related to reproduction such as building the nest, protecting the grounds, feeding and care.

Flamingos sometimes brake away from the larger flock to create a smaller flock that commences mating. This can happen at several times a year and the synchronized pattern of mating is essential for the success of the group. Flamingos usually do not have a hard time find a mate. There are some occasions where flamingos have been observed mating with different mates.

Nesting is a major part of flamingo reproduction. Both males and females work diligently building a mound before the egg is laid. This involves bringing to their feet mud with their bills. Flamingos can also use sticks, stones, feathers and other raw materials they can find. The mound ensures that the egg will be safe from flood and extreme heat.

This process can start as much as 6 weeks before the egg is laid. When the female is ready, she will lay the egg on the mound where a little water well was created – this mound can be about a foot high. Females usually lay one egg and it takes roughly 28-31 days to hatch.

Scientists have observed that flamingos don’t mate at any particular time during the year, but rather follow a pattern that is initiated by rainfall and food resources. This can take place up to two times a year or not even once a year if there is a drought or lack of food resources.

The rituals performed can be one or a mixture of some of the common rituals. Some of the head turning and wing flapping motions can look like dancing. The group begins by preening, or cleaning their feathers and spreading oil, together. The males then group together and potential mates call out to each other. The female begins by walking away and the male follows and leaves the group.

Scientist from National Geographic learned that during a mating season, flamingos are a deeper pink. This is due to the preening that occurs before mating. Flamingos – male and female – pay extra attention to the feathers in hopes of attracting a mate. When the eggs starts to hatch, the scientists noted that the flamingos were losing their color.

Other bird species have similar rituals that occur around mating time. They also partake in similar methods of applying “make-up” to attract mates. 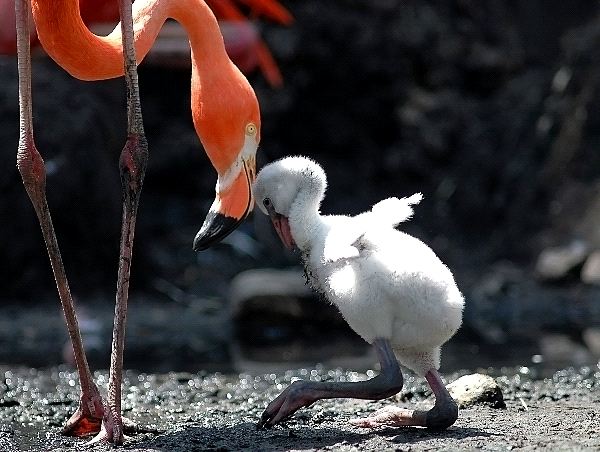 Early Life Of The Chick

Mating at the same time ensures that the eggs will hatch around the same time so that the chicks can form groups of their own or micro clicks. These clicks are necessary for the safety of the chicks. A chick away from its group is subject to attack by a predator or accidental trampling by an adult flamingo.

Flamingo chicks mature quite rapidly – this is necessary to their survival. They can start leaving the nest after nearly 7 days. It is only a few months later that they are swimming and learning to fly. Chicks reach sexual maturity by 6 years of age. At that time, they can start mating and having chicks of their own.

Flamingo eggs are prey to other birds like vultures and eagles. In some areas, mountain lions and cheetahs even prey on flamingos and their eggs. Flamingos in Africa face threat from an array of cats. Some populations have been going extinct at the hands of poachers as well.